C-Capture started as a spin-out from the Department of Chemistry at the University of Leeds, UK in 2009 and is now working on the carbon capture project at Drax Power Station in Yorkshire. I spoke to Chris Rayner, founder of C-Capture, about the company’s environmentally friendly solvent technology, the project at Drax, and plans for the future. 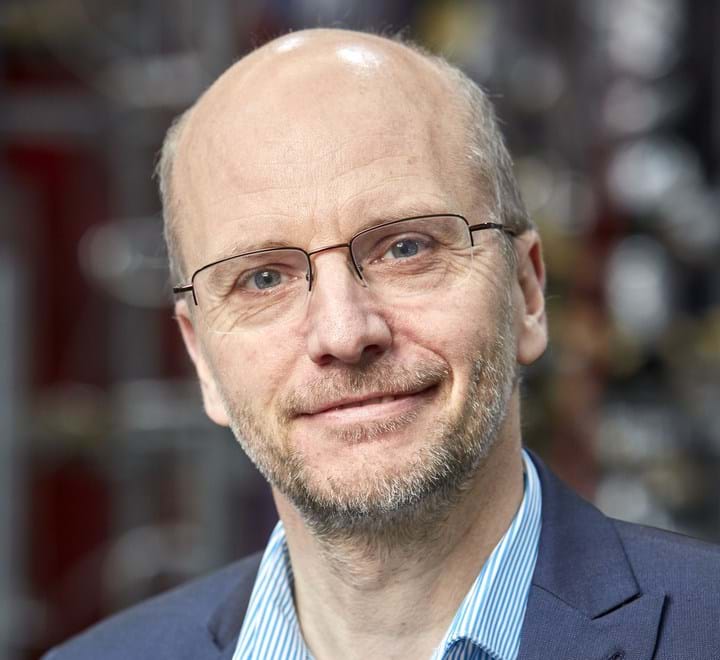 Rayner is a Professor of Organic Chemistry at Leeds and around 20 years ago, he got involved with research looking at supercritical CO2 as a solvent for extracting natural products, specifically an anti-cancer agent called Taxol which occurs naturally in yew trees. However, it wasn’t commercially viable in the long term and they moved on to studying chemical reactions in supercritical CO2, which then led to work on reactions of CO2 at atmospheric pressure. They started work on reactions of CO2 with amines related to potential drug molecules, and through this became interested in carbon capture and storage.

Amine-CO2 chemistry is well established and was first used in natural gas sweetening in the 1930s. “We wanted to really look at [amine-CO2 chemistry] in more detail and thought there must be a better way to remove CO2 exploiting our increased understanding of chemistry. We set up C-Capture in 2009 to actually look at some new methods in a lot more detail,” says Rayner.

Moving away from amines

Amines have been optimised over the years through changing the chemical structure and using amine blends, and they are the most developed technology for post-combustion CO2 capture. The CO2 in the flue gas needs to be separated from the other components such as nitrogen and oxygen that remain after combustion. The solvent is passed down an absorber column and comes into contact with the flue gas which is blown upwards. The CO2 selectively reacts with the solvent, whereas the other gases are emitted at the top of the absorber. The CO2 bound to the solvent then goes into a stripping unit, which uses temperatures just above one hundred degrees centigrade to release the CO2 so that the solvent can be recycled. The CO2 can then be transported and stored, or used as a feedstock for other processes.

Rayner and his team spent some time working on amines when the company first started, but came to the conclusion that they needed to move away from amines in order to make a step change in properties or performance. “As an organic chemist I can think of lots of very fancy, very expensive, very complicated molecules that would probably capture CO2 really nicely, but at the sort of scales this has to be done at, it has to be very simple chemistry," he says. "[You need] large-scale chemicals, preferably already available and as environmentally benign as possible so that you don’t create more problems than you’re actually solving.”

They tested numerous different chemistries and eventually devised an amine-free solvent, mainly through work of  Douglas Barnes, now Head of Chemistry at C-Capture. “We realised that we’d found something that was very special and quite different to what’s already out there. So once we got that, we were in a position to look at it in much more detail and work with the engineers, led by Caspar Schoolderman, to scale it all up. It is that interaction between chemistry and engineering which is incredibly important to what we do. “

An amine-free solvent has many advantages over an amine solvent. The different properties mean that less heat is required to release the captured CO2 from the solvent in the stripper unit. A good amine system would need about 2.5 GJ/t of CO2, which creates a parasitic load as it reduces the efficiency of the power station. C-Capture’s solvent only needs 1.5–2 GJ/t, which reduces the energy requirements.

The amine-free solvent is less corrosive, meaning that cheaper construction materials can be used. It is also biodegradable and not classified as hazardous.

C-Capture’s solvent is currently being tested as part of a demonstration project on Drax Power Station. Drax has converted four of its six coal units to burn biomass and one of the biomass units is being used with the C-Capture technology demonstrator to capture 1 t/d of CO2. In addition, the flue gas desulfurisation (FGD) unit that was essential when burning coal is no longer needed with biomass combustion, so an additional aspect of the project is to assess the feasibility of reusing this existing FGD infrastructure as an absorber unit for carbon capture.

The £11m (US13.3m) project recently received a £5m grant from the Department of Business, Energy and Industrial Strategy (BEIS) to scale up the technology under its CCUS Innovation call. Rayner says: “[The project] will be to take the technology up to 100 t/d scale and that should give us all the information we need to build a full-scale plant suitable to go on Drax. Drax want something around the 10,000 t/d scale, which is a huge piece of chemical engineering and that will be pretty impressive if and when we get to that stage.”

Rayner describes how the Drax project could eventually lead to negative emissions at the plant. “It’s a mechanism to take CO2 out of the atmosphere and stick it back under the ground, which is essentially the opposite to what we’ve been doing for the last hundred years or so. Plants grow by taking CO2 out of the atmosphere using photosynthesis. If you then burn that biomass and the CO2 goes back underground, it is a mechanism for the transfer of CO2 from the atmosphere to the ground. These negative emissions technologies are going to be incredibly important in offsetting some of the things that are very difficult to decarbonise, things like flights for example, particularly on large airplanes.”

The Drax project is currently capturing and releasing the CO2 but has future plans to store it or utilise it, for example in the fizzy drinks industry.

“We’re quite happy to work with people who want to utilise the CO2," says Rayner. “As an organic chemist I’m really interested in reactions of CO2 so it’s something that I think is a really interesting area. But with my sort of more practical hat on, when you think about the scale of what we need to do, particularly if we’re going to impact on the climate, the vast majority of the CO2 captured really has to be stored. CO2 utilisation is good and some of the more interesting examples of utilisation probably will work, financially as well as practically, some of others maybe not quite so much. I think with CO2 utilisation you’ve got to look at the whole process very carefully, thinking about all the different inputs, the energy, where it comes from, or the reagents you might be reacting it with. You’ve got to really think about the whole process to decide whether it’s worthwhile and whether it’s going to contribute significantly to combatting climate change.”

The future of CCS in the UK

A report about biomass from the Committee on Climate Change (CCC) last year cautioned that the full life cycle of emissions needs to be considered when using biomass, and Drax has come under some criticism for importing its biomass from forests in the US. Commenting on the full-chain sustainability of the project, Rayner says: “From my own personal perspective, as long as it is all done sustainably – and rules and regulations are in place to make sure it is – then I think it’s fine. Obviously the closer the biomass is to the power station the better. [What I] will say about Drax is that they are really trying; they are doing something on a scale that is significant. There aren’t that many people that are doing anything on scale – certainly not on the scale that’s required to actually make any sort of difference to climate change.”

The CCC report also said that using biomass for electricity generation can only be sustainable in the long term if it is coupled with CCS. There are several CCS projects under consideration or development in the UK. For example, Pale Blue Dot’s Acorn project aims to develop a full chain CCS hub at St Fergus in Scotland, Tata Chemicals Europe aims to begin operations at the UK’s first industrial-scale carbon capture plant in 2021, and the world’s first commercial full-chain CCUS project is scheduled to begin operations in Teesside in the mid-2020s. However, despite the ongoing projects and the Government issuing an action plan for full-scale CCUS deployment by the 2030s, the Government’s plans have been criticised for being too vague and ambiguous to tackle the climate crisis.

“Given the climate emergency I don’t think anybody is moving fast enough,” says Rayner, speaking about the speed at which the Government is deploying its CCS policies and funding. “I think the next 12 months are crucial. There will have to be some big decisions. Compared with many parts of the world we’re doing better than them but I don’t think anywhere is doing things on any scale or timeframe that really is what we need to do.”

The team at C-Capture will certainly have a major role to play in the future of CCS in the UK, and Rayner emphasised how each person in the company contributes enormously to the project. Retrofitting the C-Capture technology to any existing facility with a CO2 stream is relatively straightforward, so it can be used on other facilities. While the company is currently focussing on the Drax project, it is also looking at applying its technology to other types of facilities such as iron, steel, and cement, as well as natural gas sweetening, and hydrogen production with carbon capture.

“We have big plans for expansion over the next few years,” says Rayner.