THE UK government has unveiled an action plan for developing carbon, capture, utilisation and storage (CCUS) projects at the Accelerating CCUS summit in Edinburgh.

The summit was hosted by the UK government, the International Energy Agency (IEA), and the Global CCS Institute on 28 and 29 November. It was co-chaired by Claire Perry, the UK minister for clean energy and growth, and Fatih Birol, executive director of the International Energy Agency. It was attended by energy ministers and senior executives of major energy industries.

“[This summit] shows how determined all countries are to unlock the potential of this game-changing technology that representatives from across the globe are gathered here today in Edinburgh,” said Perry. “The time is now to seize this challenge to tackle climate change while kick-starting an entirely new industry.”

“Without CCUS as part of the solution, reaching our international climate goals is practically impossible,” said Birol. “CCUS can also enhance energy security and boost economic prosperity. Yet up until now, progress has been muted and if this continues the challenges we face in the energy sector will become infinitely greater. That is why the IEA is bringing together industry, governments and our own technology network – as well as the investment community – to make CCUS a reality.”

The government has previously attempted to kick-start CCUS in the UK, but a funding competition in 2011, and another in 2015, were both dropped. Perry announced new plans at the conference for the government to develop the first CCUS facility by the mid-2020s, with the aim of deploying at full-scale by the 2030s.

Perry also signed a memorandum of understanding with Norwegian minister of petroleum and energy Kjell-Børge Freiberg to collaborate on CCUS projects. Norway is already working on a government-backed full-scale, full-chain CCS project. The agreement provides a framework for cooperation in research and development, including increased collaboration for knowledge dissemination, and increased cooperation in areas such regulatory barriers and funding management. 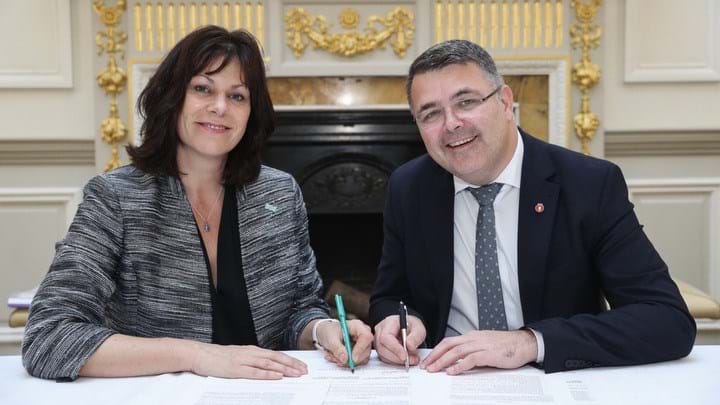 The conference also coincided with the announcement that the Oil and Gas Climate Initiative (OGCI) will be constructing the world’s first gas-powered full-chain CCUS project at Teesside, and an announcement from the government that it will invest £175,000 (US$223,500) in Project Acorn at the St Fergus Gas Terminal in Scotland.

Project Acorn aims to quickly deliver large-scale, cost-effective CO2 transport and storage infrastructure in the Central North Sea. It will take advantage of legacy oil and gas infrastructure to bring the cost down and take advantage of the geological storage sites. The funding for the project will be matched by the Scottish government and the European Commission.

Alan James, managing director of Pale Blue Dot Energy and Acorn CCS project leader, said: “Through Acorn CCS, Scotland can use legacy oil and gas assets to deliver environmental benefits, unlocking CO2 transportation and storage solutions for other carbon capture utilisation and storage (CCUS) projects along the east coast of the UK. This is a critical and exciting step towards building the UK’s first large-scale CO2 transport and storage infrastructure.”

Paul Wheelhouse, Scotland’s minister for energy, connectivity and the islands, said: “Scotland’s key CCUS resource is our vast potential for the storage of CO2. Scotland’s ‘over-supply’ of offshore geological storage assets, such as can be found in the Central North Sea, presents us, as a nation, with an economic opportunity in future to be at the centre of a hub for the importation and storage of CO2 from Europe. In such a way we can further help address the threat posed by climate change, while also utilising the skills within Scotland’s energy supply chain.”

The action plan by the Department for Business, Energy & Industrial Strategy (BEIS) sets out the next steps that the government and industry need to take in order to deploy CCUS at scale during the 2030s. The BEIS also released additional reports examining potential business models to establish an incentive for industrial carbon capture in the UK, a study estimating costs of shipping CO2 to geological storage sites, and a technical advisory on CCUS technologies.

The action plan includes a commitment to invest £20m supporting the construction of CCUS technologies at industrial sites across the UK, as part of a £45m CCUS innovation programme. The government has also allocated £315m to the Industrial Energy Transformation Fund for projects that will decarbonise industrial sites, which includes fuel switching and carbon capture.

The report includes a response to recommendations made by the CCUS Cost Challenge Taskforce to the government in July. The government has agreed to enable the deployment of one CCUS cluster by the mid-2020s, although the taskforce report recommended that a minimum of two clusters would be necessary. Geoffrey Maitland, Fellow of IChemE and a member of taskforce, commented on the government’s plans. “I think it’s a very good response from the government. My worry is that on the basis of one cluster you won’t necessarily have the scale and the multidimensionality to actually bring the cost down as much as you can do.”

The plan outlines numerous steps that will be taken in 2019, including engaging with industry to assess the critical challenges in deploying CCUS, and identifying existing oil and gas infrastructure which could be re-used for CCUS purposes. “What they’ve committed to do in 2019 – to get the plans in place, to do the consultations that are needed to identify where this first plant is going to be, and what policy and business model framework is needed – is as much as one could conceivably do,” said Maitland. “In fact, it’s a very packed agenda for 2019 so I suspect the government, and BEIS in particular, are going to need a lot of help from the community to get that in place.”

“I would like to see perhaps less caution in the speed in which we bring the cost down and to provide some task-ready incentives to business to do things quickly whilst the cost is being brought down, rather than to wait until the cost is brought down before going to larger scale. I think it’s so urgent to do it that it requires the government to bear its share of the risk in terms of actually getting this deployed quickly at a larger scale. However this can be tweaked as we go through the 2020s. If what happens in 2019/2020 receives a good response from the industry and the mechanism is in place then I don’t see why this couldn’t be accelerated.”

Jenifer Baxter, head of engineering at IMechE, said: “CCUS is a critical part of the future energy and industrial systems and the government is heading in the right direction with providing additional funding. However, the amounts are somewhat underwhelming and the translation into action in this sector is slow. The UK is well-placed to lead the world in the development of carbon capture and storage technologies, which are considered critical for decarbonising our whole energy system. Deployment of demonstration plants and low carbon industrial clusters should form a central part of our industrial strategy. The renewed focus on CCUS is welcome, but planning should be converted into action soon.”

In the chairs’ summary of the summit, Perry and Birol concluded: “The summit provided an important opportunity to build partnerships, share best practices and identify the solutions to accelerate CCUS deployment. The government of the United Kingdom and IEA will continue to support the outcomes of the International CCUS Summit, including through existing multilateral initiatives, the Conference of the Parties, and will report progress at the IEA Ministerial Meeting in 2019.”