Velocys is a company that has developed technology to convert feedstocks such as household waste into aviation fuel, and plans are underway for a commercial-scale plant in Immingham, UK. I spoke to Neville Hargreaves, Vice President of Waste to Fuels at Velocys, about how the company can contribute to the decarbonisation of the aviation industry with its renewable jet fuel.

AVIATION accounts for more than 2% of global CO2 emissions, with around 895m t of CO2 emitted from domestic and international flights in 2018 according to the International Air Transport Association. This is an increase of 185m t compared to 2013, and without action, emissions would increase further with the increasing passenger numbers. Aviation is extremely difficult to decarbonise and as the industry grows, finding a way to curb emissions will be crucial. Renewable jet fuel, such as that produced by Velocys, will therefore play an important part in addressing the climate crisis.

Velocys originated from two parent companies. Oxford Catalysts was formed in 2004 as a spin out from the University of Oxford, and in 2008 it acquired Velocys, which was a spin out from the Pacific Northwest National Laboratory (PNNL). The merger combined Oxford Catalysts’ proprietary catalyst with Velocys’ Fischer Tropsch (FT) technology, a process that converts syngas to hydrocarbons. “The invention that came out of PNNL was what we called microchannel technology, which is really about doing reactions in small tubes with high heat flux so that it removes heat very efficiently,” says Hargreaves. “That’s very important for the Fischer Tropsch reaction – and for a number of others – but we decided to focus on Fischer Tropsch.”

In the intervening decade, Velocys completed four demonstrations of its process at pilot scale, and in 2018 achieved a 5,000-hour run at commercial scale at its Oklahoma demonstration plant. It is currently developing two major projects; Bayou Fuels in Mississippi, US, which will convert wood waste to diesel for road transportation, and Altalto in Immingham, Lincolnshire, UK, which will convert household and commercial waste to sustainable aviation fuel. “We’ve come a long way over those years to get to a technology that’s fully demonstrated at scale,” says Hargreaves. The Altalto project is also backed financially by Shell and British Airways, which recently committed a further £2.8m (US$3.4m) that will be used for additional design and engineering work, in addition to the £4.9m (US$6m) already spent. 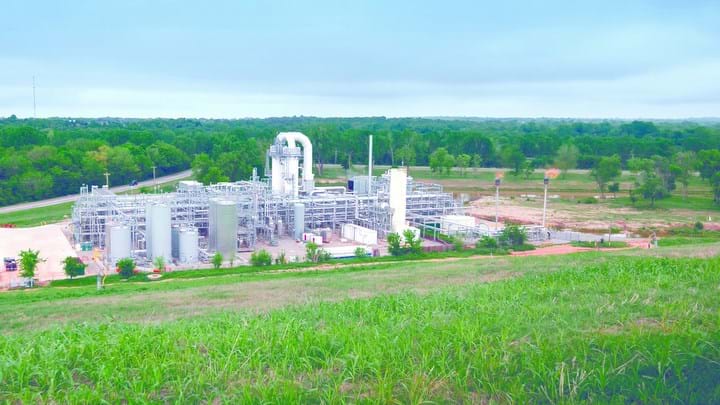 The Velocys FT reactor was demonstrated at the ENVIA site in Oklahoma. Credit: Velocys

The waste-to-fuels process starts with physical sorting of the non-recyclable household and commercial waste, which includes shredding, drying, and removing any metals and inert materials. The remainder is gasified, which causes everything containing carbon to dissociate, producing carbon monoxide and hydrogen. This syngas is cleaned to remove impurities and then becomes feedstock for hydrocarbon synthesis with the FT method. The hydrocarbons then undergo hydrocracking, as at a conventional refinery, to produce the fuel.

Velocys’ FT reactor is unique in that it has a compact design. “We are the only company that has a commercially demonstrated FT unit at the right scale,” says Hargreaves. “All the FT installations in the world today are very large facilities – too big for waste. What we do is make it work on a scale that works with the amount of syngas that we have available.” 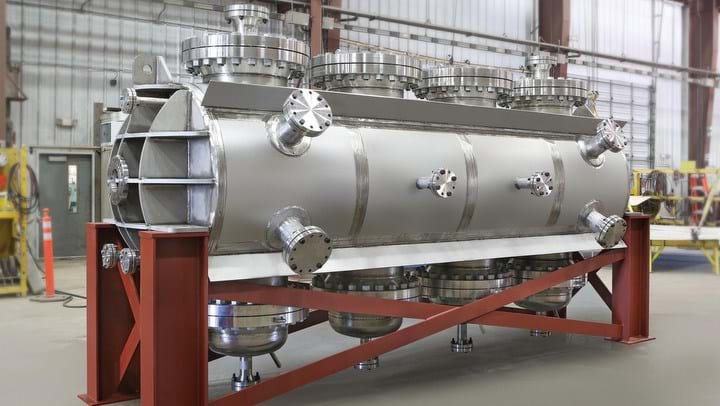 While other sustainable aviation fuels projects exist worldwide – such as Neste’s facilities in the Netherlands and Singapore, and SkyNRG’s proposed plant in the Netherlands – Hargreaves expects Velocys’ Altalto plant to be the first of its kind in Europe, and possibly the second in the world. “Each of the individual technology components has been proven at commercial scale, so from that sense we’re not doing anything new, but actually putting it all together in this particular configuration – that’s not been done before.”

Velocys’ process can also use woody biomass as a feedstock, as in its Bayou Fuels project in the US. Hargreaves described how biomass can be as sustainable a feedstock as household waste. “Both of them are sustainable feedstocks. In Natchez, Mississippi, we’re in the middle of a very large forest and that forest generates waste: bark, chippings, sawdust, thinning of small trees. There is a sustainable generation of biomass from that forest that is happening whether we like it or not. At the moment that stuff is left on the ground because there isn’t any other use for it, so it really is a waste material, it’s just not household waste.”

He adds that there are also advantages to using wood waste from a process point of view as there are fewer contaminants compared to municipal waste. He also emphasises that the company will only use the waste from forests. “We wouldn’t want to be using virgin forests, that really would be questioning our sustainability.”

However, producing fuel from municipal waste is the preferred option in the UK as there aren’t enough forests, and it also helps to solve the waste problem. “It’s a better way to treat waste than any of the options available today [from a carbon intensity perspective]. It’s better than landfill, it’s better than incineration, and even energy from waste with heat recovery.” As decomposing biogenic material in landfill also emits methane, using the waste to make fuel will avoid the production of this potent greenhouse gas.

Velocys’ aviation fuel has a 90% reduction in particulate matter and almost 100% reduction of sulfur compared to conventional fuel, as well as 70% lower CO2 emissions. “You get the credit in the life cycle analysis for your feedstock but then you have to put a debit against that for energy used in production, and the result is that we end up with 70% reductions,” says Hargreaves. Velocys uses a mixture of renewable and non-renewable energy, including power from the grid and natural gas.

“What we want to do is maximise our renewable content so that overall we can achieve the required CO2 reductions. We are looking at carbon capture and storage. We actually make some CO2 partly from heating the gasifier but also during the clean up process we go through the water-gas-shift reaction and that generates some CO2. We can’t say we’re definitely going to do [CCS], but we’re in a good position to drive down those emissions even further.”

Currently, new fuels must meet the standards set by the American Society for Testing and Materials (ASTM), and use an ASTM-approved process. The ASTM stipulates that Fischer-Tropsch jet fuel can be blended with conventional fuel at up to 50%. Velocys would likely blend its fuel at a lower percentage as there won’t be a sufficient volume compared to demand for jet fuel in the UK. However. it is possible that 100% renewable fuel could be used in the aviation industry in the future. “Regulations change, of course, in response to changing technology,” says Hargreaves. “People are asking to look at high alternative fuel blends. There are certain things that you do need to look for – at 100% you need more lubricity additives to make sure the fuel lubricates because some of the natural lubricants in conventional fuel are also pollutants.”

The biggest risk to the development of the plant is financial, particularly as the first plant using a new process will always be the most expensive. “We’ve seen that with renewable energy electricity technology – the first ones cost a lot of money. After that they start to bring the price down with mass manufacturing. That should be the same for us as well. We expect our costs to decline as we do more and more of these plants. We’re very fortunate that we have two highly recognised partners – British Airways and Shell – and they bring a lot of credibility to the project and they expect to cornerstone the financing of it. However, we are looking for one or more other investors to come in and join us.”

Velocys was previously a supplier to the Green Sky project, a waste-to-fuel project with British Airways and Solena that fell through in 2016 due to a lack of funding and government support. However, Hargreaves assures me that the Altalto project is on a much more secure financial footing, and that the technology has matured since then. Government support has also increased, particularly with changes to the Renewable Transport Fuel Obligation (RTFO) guidance earlier this year by the Department for Transport (DfT), which included the creation of a category for development fuels.

“If you’re putting ethanol or biodiesel into the fuel pool, that generates a certain amount of greenhouse gas savings,” says Hargreaves. “If you’re going after the more difficult sectors and making a fuel that delivers a deeper carbon reduction, as we’re doing, then that deserves additional credit.” The changes to the RTFO also allowed the inclusion of aviation fuel as a renewable transport fuel. “That’s an important policy step that has been crucial to this project.”

Another policy change that the DfT is considering is to reward companies for using mixed waste; currently Velocys is only rewarded for the biogenic fraction of the waste. However, there are still further improvements that can be made to help to support the sustainable aviation fuels industry.

“The other place where we would like to progress is the idea of creating an office for sustainable aviation; to create the sense that this is a desirable objective from an industrial strategy point of view as well, and that might lead to some better support for innovative investment.”

The Altalto plant is due to be operational in 2024 and will convert some 500,000 t/y of waste into 60m L/y of fuel. The speed at which plants such as this become operational worldwide will be critical to decarbonising the aviation industry.

“I think there could be a pretty swift rollout after the mid-2020s,” says Hargreaves. He explains that by then it will most likely be a question of waste policies rather than capital that drives the roll out of waste-to-fuel facilities. “For example, one of the reasons this works in the UK is that the UK has a pretty high tax on landfill. If you’re in a country where you don’t get penalised for throwing your waste in the sea or just leaving it on the roadside, then the economics for a project like this don’t work.”

The Altalto plant has received a lot of support, which will be key to it becoming a success. “There’s a tremendous sense of goodwill towards this project, from government, from everyone we talk to in industry, and indeed the finance world as well,” says Hargreaves. “I think people understand that it’s very much in line with mandates to invest in greenhouse gas reducing technologies.”