The Explosive Foundation of IChemE

And the lesser-known chemical engineers who helped shape it, from Martin Pitt

WITH IChemE’s Centenary celebrations under way, I wanted to use this month’s article to explore the chemical engineers who influenced the early development of the Institution, but who are typically obscured by the long shadow cast by the profession’s founder, George E Davis. 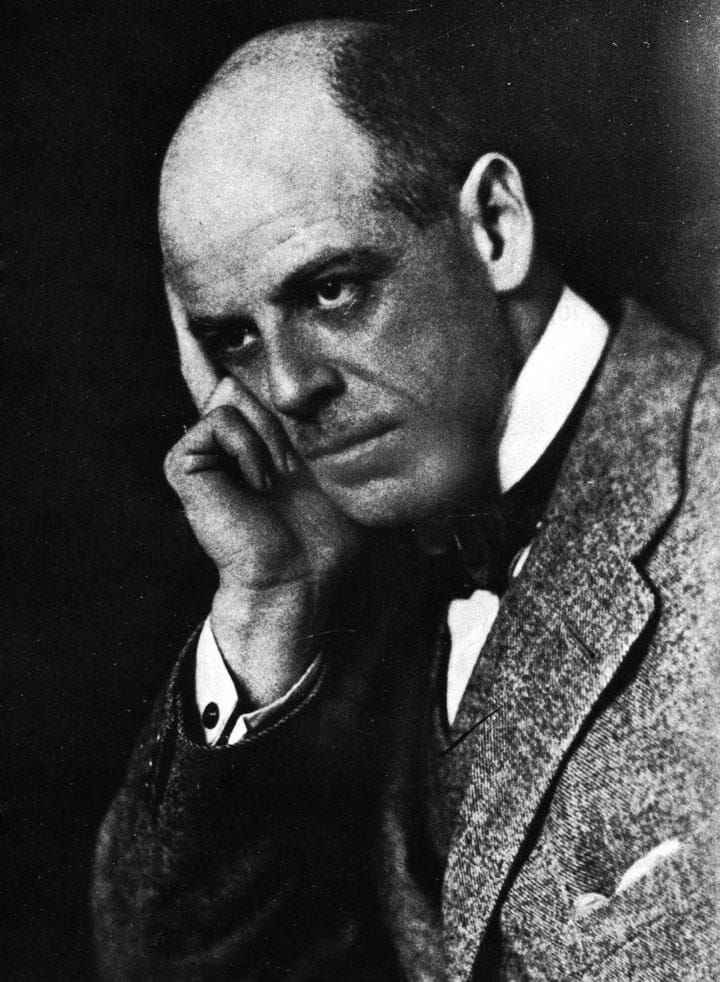 At the beginning of the first world war, both Germany and Britain had a problem. Unless the war finished quickly – and governments were realising this was unlikely – they would run out of explosives. Germany’s problem was the lack of nitrogen compounds, which were mainly mined in places controlled by the British Empire. The brilliant solution was the Haber-Bosch process by which ammonia was made out of thin air.

Britain’s problem was different. It did not have much manufacturing capability – it imported most explosives by sea from South Africa and the US.

In 1915 there was the Shell Crisis where the British army literally had too little ammunition, causing a great political furore, and a Ministry of Munitions was established.

In anticipation of this, KB Quinan, an American, and the General Manager of Cape Explosives in South Africa – the second-largest such factory in the world) – was summoned to the UK in December 1914 to build a national explosives factory in Oldbury. It was built in record time and was in production by May 1915. He continued to build others with an exceptional skill in organisation. A key feature of this was the use of mass balance, now familiar to us but then a novelty.

Many were also constructed in Canada, vastly increasing the amount of munitions available.

After the war, Prime Minister David Lloyd George told Parliament: “It would be hard to point to anyone who did more to win the war than Kenneth Bingham Quinan.”

Although not generally known to the public, Quinan impressed the Government – strongly helped by fans including Arthur Duckham and William Macnab – and people in the chemical industry were impressed by his methods. Hence Quinan’s example was used to rapidly restore and expand the general chemicals industry. In this respect he probably was more important historically than George E Davis. However, he turned down the offer of a knighthood and returned to South Africa for the rest of an inventive career that was not restricted to explosives.

You can read more about him here: https://bit.ly/3L7ugVx 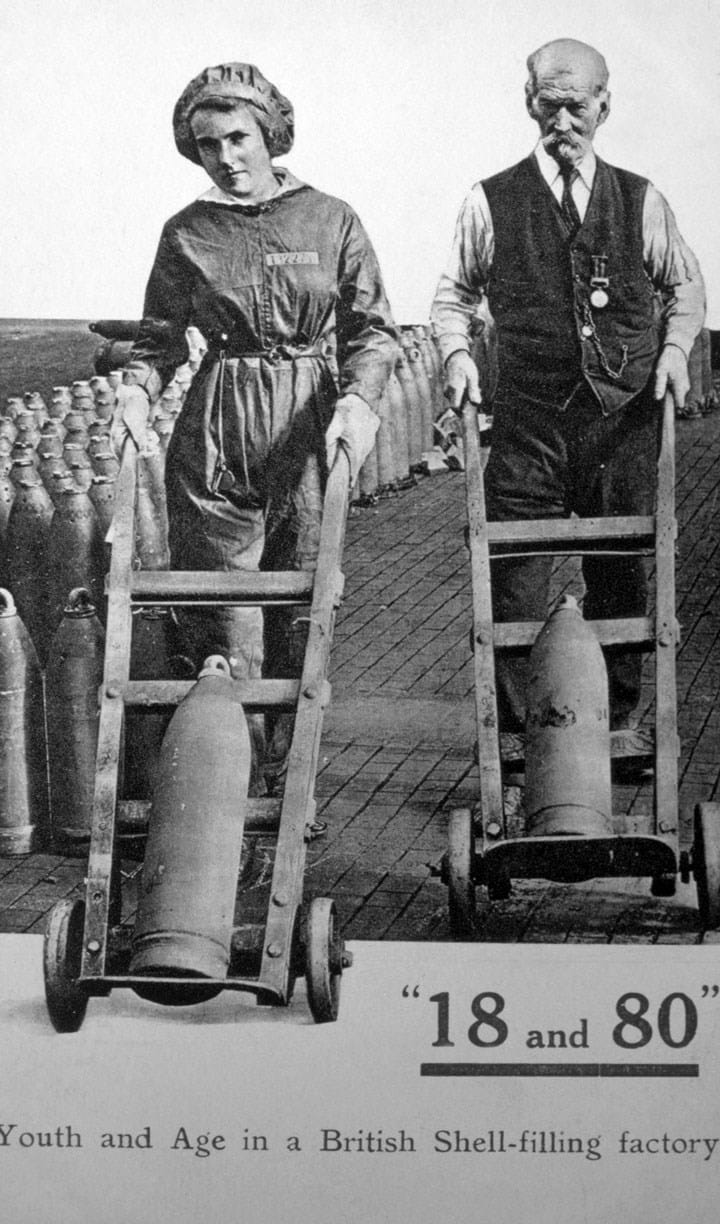 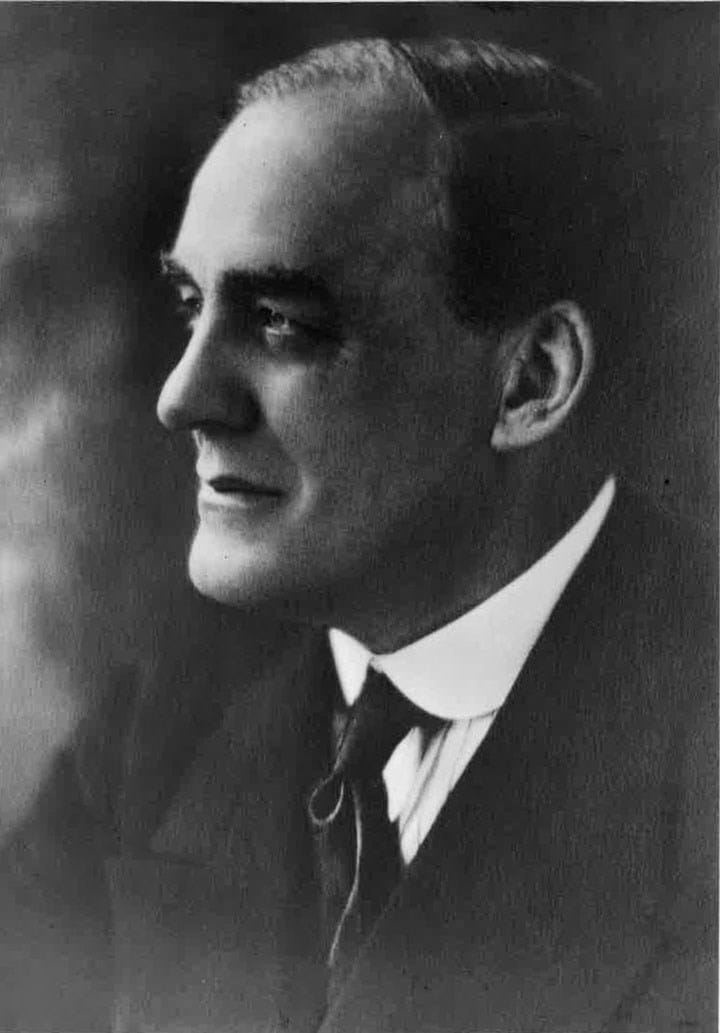 Two important explosives are trinitrotoluene and trinitrophenol, which obviously need toluene and phenol – derived from coal along with coke and gas. An expert in their production, and inventor of the vertical retort for this process, Arthur Duckham joined the war effort, becoming Deputy Director of Munitions Supply. His organisational ability and understanding of engineering practice led to other responsibilities – including Director General for Aircraft Production – and he was knighted for his service. Unlike Quinan, who shunned publicity, Duckham was a great marketeer – for himself, his business and the profession.

His efforts though, were hindered while the US remained neutral until 1917. During this period Germany arranged contracts to buy up all surplus US phenol and convert it into aspirin to prevent it being sent to the UK – in what was later known as the Great Phenol Plot.

After the war Duckham’s business boomed, expanding beyond the coal products industry, in substantial part due to his ability as a salesman, and his contacts in industry and government. He was convinced that chemical engineering deserved its own distinct institution, and chaired the committee which finally achieved this in 1922.

This larger-than-life character was its first President. Quinan was the first Vice President, and South Africa was the first place outside the UK to have a branch.

Of the first 300 applications for membership of IChemE, 54 had worked on explosives. Of the first 16 presidents, ten had done work for the Ministry of Munitions. 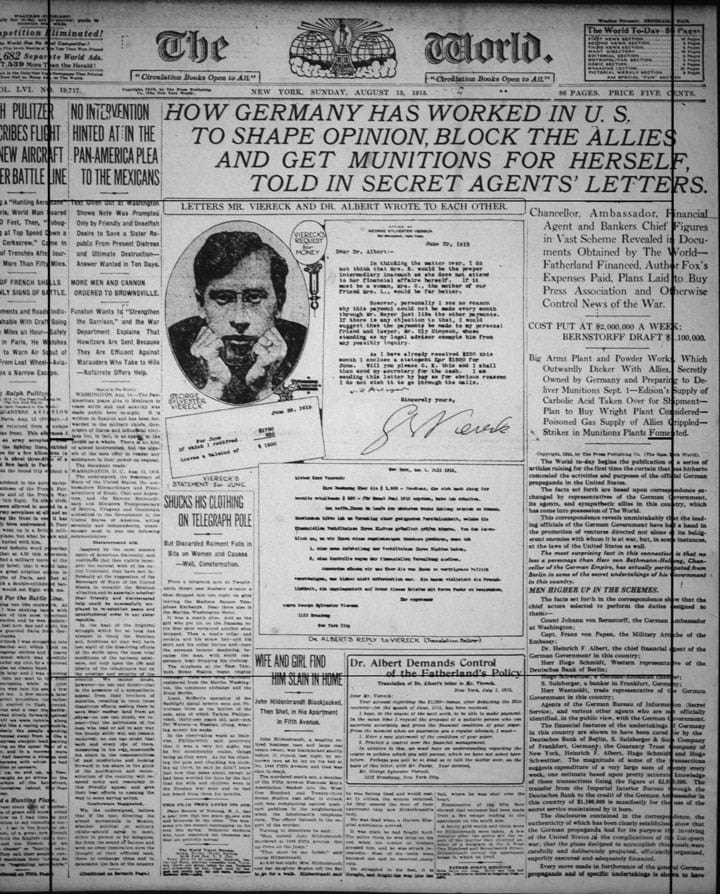 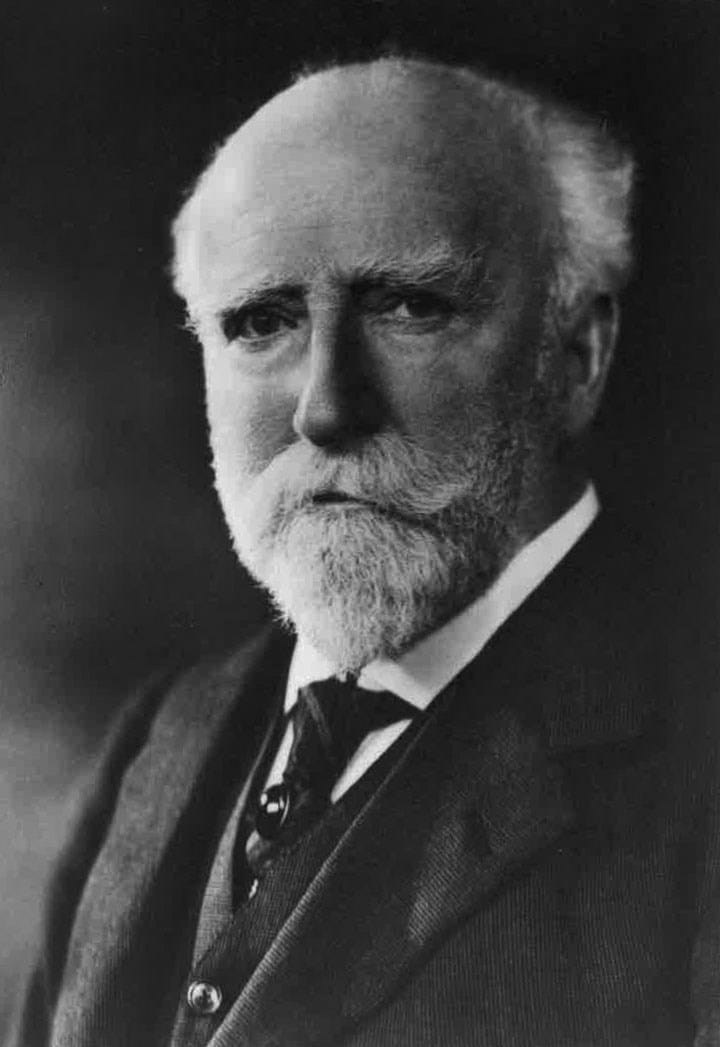 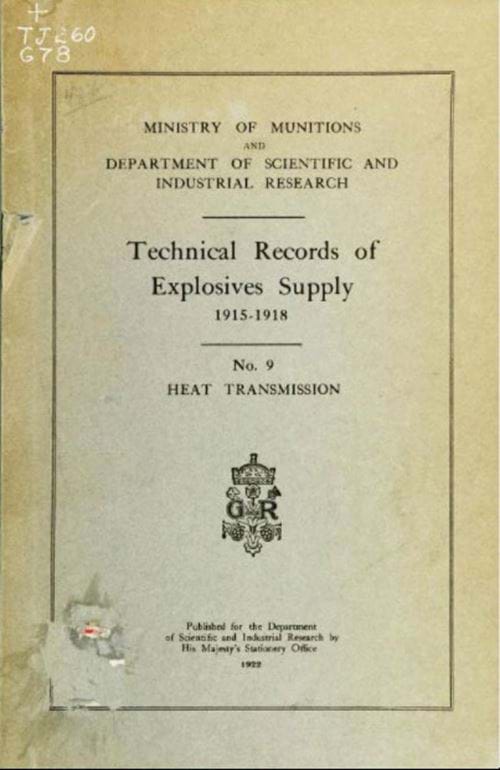 Macnab was already known as an expert on explosives by the start of the war. In 1914 he gave a series of lectures to chemists being recruited for the war effort and in 1918 he summarised what had been learned in the ten-volume Technical Records of Explosives Supply (pictured). In between, he was one of the original members of a Committee on Explosives, and was involved in the construction of many factories. The introduction to the Technical Records was where he argued that the success of the explosives industry should not be discarded after the war but used as a model for a new chemical industry.

When he became IChemE President in 1935 his address at the AGM was “Chemical Engineering in Explosives Manufacture”. 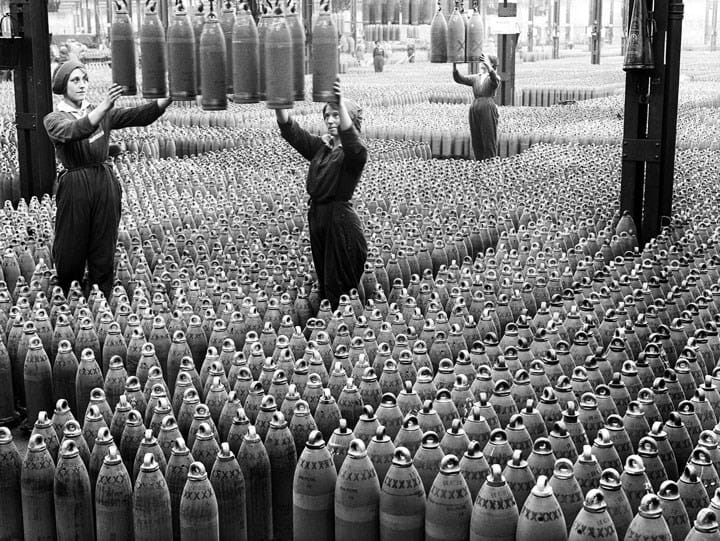 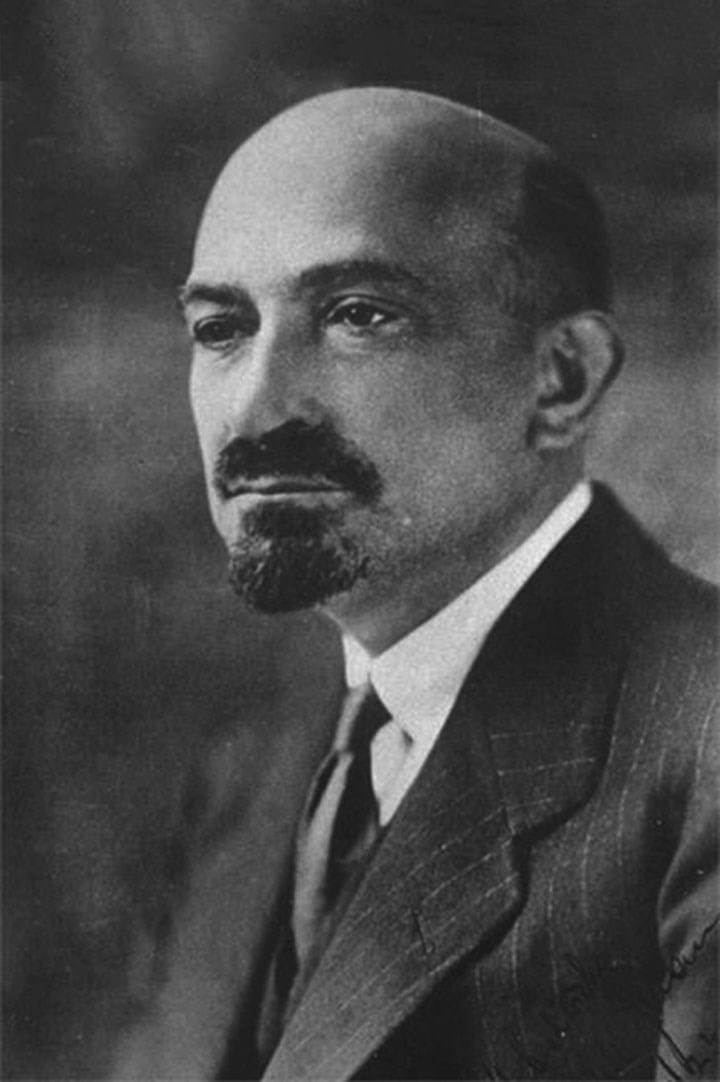 As well as explosive compounds, there was a shortage of acetone. This was an essential solvent in the manufacture of cordite, the main propellant used by the army and navy as well as in lacquering aircraft wings to waterproof and stiffen them. Since pre-war, this had mainly been imported from Germany and Austria, so its supply ceased. It could be made from wood, but it took 100 t to make 1 t of acetone, increasing the demand for wood as well as needing the factories to make it.

The alternative was to make it from ethanol via acetic acid and calcium acetate. This desperate situation caused Winston Churchill to ask: “What proportion of our total explosive or propellant output could be based upon 10 million gallons of whiskey?”

Enter Chaim Weizmann, a Russian-born biochemist, who had studied in Germany and Switzerland, but a British citizen since 1909. Amongst those who know, he is considered the father of industrial fermentation. At the University of Manchester in 1915, he developed a fermentation process to make acetone from carbohydrates such as cereal grains. Using the bacterium Clostridium acetobutylicum he produced acetone, butanol and ethanol in what is now known as the ABE reaction. Though not trained as a chemical engineer, he moved to London and scaled up his process to 3,000 t/y. Within a year there were also facilities in Northern Ireland and Canada.

His initial work was with maize, imported from the US, but other sources were used. In particular, children were encouraged to collect acorns and horse chestnuts for the war effort though the purpose and process were secret. The Cooker House and Acetone Fermentation tank – in which he did his early work – are now historic listed buildings.

By the 1920s, Weizmann’s chemical patents and wise investments were bringing him an income estimated at hundreds of thousands of pounds a year. He dedicated the rest of his life to the creation of a Jewish homeland, becoming the first President of Israel – while not entirely abandoning chemistry, by founding research institutes and helping the UK in the Second World War with improved methods for rubber and high-octane gasoline.

While these activities meant he was not directly involved in the formation of the IChemE his influence on the chemical industry is considerable, and it was because of him that biochemical engineering was a topic for the Institution from its earliest days.

It’s interesting to note that after the War he became good friends with Germany’s ammonia synthesis pioneer Fritz Haber, who was also a Jew and an enthusiast for a Jewish homeland.

Granger/Shutterstock
Weizmann (right) with Lloyd George. He was introduced to him, along with Churchill, in 1915 and given the facilities to develop his process for large-scale volumes of Acetone to aid the production of cordite
ANL/Shutterstock
The Royal Naval Cordite Factory in Dorset, site of the Cooker House and Acetone Fermentation Tank where Weizmann did his early work (designed and erected by Frederic Nathan)

Colonel Sir Frederic Nathan was appointed Superintendent of the Royal Gunpowder and Small Arms Factories in 1909. He was also manager of the Nobel Factory in Scotland which produced propellants and cartridges, having patented a process for the nitration of glycerine and producing the first batches of cordite, based on nitroglycerine and guncotton (nitrocellulose). During the war he was appointed Director of Propellant Supplies. New factories were built with greatly-improved processes and much lower costs, as well as healthier conditions. He showed that a 15-minute break in a 4.5 hour shift improved productivity despite lost time.

Nitroglycerine of course needs glycerine, which is also used in soap, so he therefore took control of the whole of the British soap industry. After the war he made sure that modern chemical engineering was used in the peacetime production of soaps, and thus had a major influence on the industry and on recognition of chemical engineering.

He was also in charge of industrial ethanol for munitions and essential trades. After the war he did further research, resulting in a successful petrol-alcohol motor spirit, Discol.

Being well aware of the problem with acetone, it was he who introduced Weizmann to Churchill.

He worked with Macnab in advocating setting up IChemE, and was its second President. Among his many contributions were a focus on educational requirements, and the setting of its own exams.

Everett Collection/Shutterstock
Cordite was used initially in standard rifle cartridges and also for large weapons, such as tank guns, and artillery
(Left) The Devil’s Porridge Museum
Shortages of cordite led to the creation and expansion of factories, notably the HM Factory, Gretna (left) and the Royal Navy Cordite Factory, Holton Heath (right)

For more on IChemE's Centenary, including historical reflections from IChemE members, visit the dedicated website: www.chemengevolution.org

Next month I’ll explore the 19th century inventors of the symbols and calculations upon which modern science-based chemical engineering depends.