The winners on the night

The glittering awards ceremony, the highlight of the IChemE calendar, took place on 2 November at the Hilton Metropole hotel in Birmingham, hosted by UK actor Chris Barrie. The 140 entries in this year’s awards came from 21 countries.

Clean technology venture Desolenator had earlier in the evening won the Water Award for its pioneering device, which can purify brackish, salt or otherwise contaminated water into clean drinking water at a cost of just US$0.01/L. The Desolenator device will be available in three sizes – portable, providing 8 L/d of water; household, providing 20 L/d; and community, providing 1,000 L/d. Around 1.2bn people currently experience water stress around the world, whether through drought, humanitarian disaster or poor water treatment facilities. The company hopes its device will help to tackle this problem in a cheap, sustainable way.

Catriona McGill, Desolenator’s project manager, who picked up the award on behalf of the company, explained that they were able to make the device more efficient as it makes use of heat from the sun, which would normally be lost or wasted in a solar-powered device, to heat the water. The water is initially heated to 98oC using the thermal energy, at which point it is fed into a boiler powered by electrical energy from the solar panels, creating pure, distilled water. McGill said that the device is as equally applicable on the Californian coast as it is in the developing world.

Desolenator was not the only entry to take home two gongs. A joint entry from Johnson Matthey and BP won both the Research Project of the Year Award and the Oil and Gas Award. The project team has developed a new Fischer-Tropsch catalyst and reactor system that can produce sustainable fuels from renewable biomass, municipal solid waste and flared natural gas. The novel reactor requires 50% less capital investment than traditional reactors and has significant environmental benefits.

Making sustainable fuels was an ongoing theme in the evening, and not just in the Sustainability Award, which was won by GENeco. The company co-located a food waste recycling facility at Bristol wastewater treatment works, adding a biomethane generation plant and a biomethane vehicle refuelling station. The facility now produces enough biomethane to power 7,000 homes annually and a fleet of biomethane-powered vehicles.

In the Energy Award too, a sustainable biomethane facility trumped. A joint team from United Utilities, Jacobs Engineering and Laing O’Rourke triumphed in the category for their work to deliver an integrated energy generation centre at the Davyhulme wastewater treatment works near Manchester, UK, producing power, heat and biomethane through biosolids digestion. The project was completed in under a year.

This year’s Training and Development Award went to Imperial College London’s chemical engineering department, for its carbon capture pilot plant, which has to date provided more than 7,000 undergraduate chemical engineers and schoolchildren with hands-on experience of running a chemical plant.

More than 20 years of work was recognised with the Innovative Product of the Year Award, which went to Ceres Power for the SteelCell, a solid oxide fuel cell. The SteelCell is made from lower cost materials than other such fuel cells and is much more robust, which the company believes will allow large-scale commercialisation. The SteelCell could decentralise energy production and power industrial and domestic buildings and vehicles. It has already received commercial interest and Ceres Power is working with major firms including Honda and Nissan to develop it further.

The Biotechnology Award also went to a project that has been a long-term labour of love – a process to coat vaccines with silica that allows them to be stored without refrigeration. The process, known as ensilication, was developed by the University of Bath’s Asel Sartbaeva, and was first covered by The Chemical Engineer in May. Hundreds of thousands of people die every year from diseases preventable through vaccination. One of the reasons is the difficulty of transporting delicate protein-based vaccines which must be refrigerated. The new ensilication process could allow such vaccines to be transported much more easily.

Two individual awards were also presented. Balaji Sridhar, founder of Nanoly Bioscience based in the US, was named the Young Industrialist, while Clementine Chambon, a bioenergy PhD student at Imperial College London, was named the Young Researcher for her work with communities in rural India.

The IChemE Global Awards ceremony is one of three held by the Institution. The Malaysia Awards were held on 17 October, while the Singapore Awards took place on 19 October. Winners from both ceremonies were entered into the corresponding categories in the Global Awards, and in fact, the winners of the Singapore Process Safety Award, the Ministry of Manpower, National Environment Agency and Singapore Civil Defence Force, also won the Global Process Safety Award, for the implementation of the Workplace Safety and Health (Major Hazard Installations) Regulations to protect people and the environment, and prevent accidents. 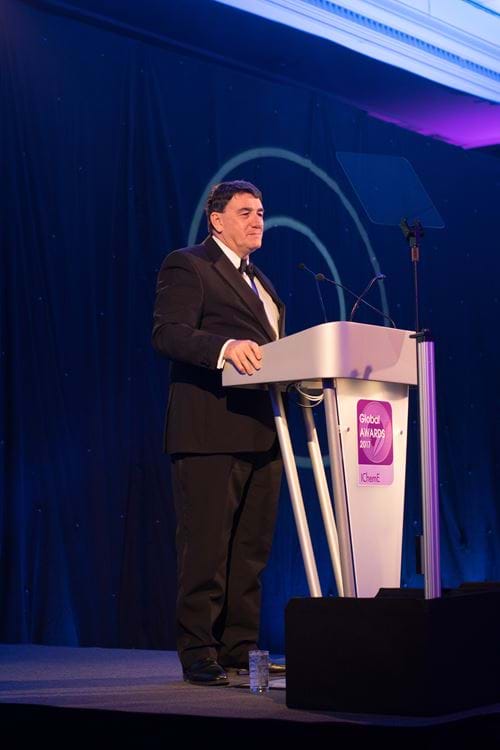 In total, 15 Awards were given out on the night, including to AstraZeneca, GSK and the Centre for Process Innovation. Visit the IChemE website for a full list of winners. You can also view pictures of the evening on the image gallery.

“IChemE exists because chemical engineering matters. Tonight’s programme is an insight into what this really means. Chemical engineers are working in many different industry sectors and areas of research all over the world. The breadth of our work is illustrated by some of IChemE’s core themes – energy, food and nutrition, water, safety, health and wellbeing. These are things that matter to everyone on this planet, and we can be rightly proud of the contribution we make,” said IChemE president John McGagh.

The Global Award winners were interviewed on the night for a series of YouTube videos to highlight their work. The videos will be available on the IChemE YouTube channel in the coming weeks.