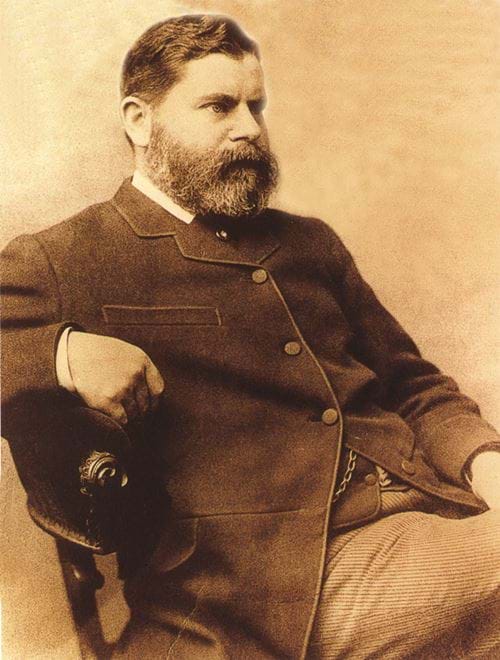 For a series called Chemical Engineers who Changed the World, it would be downright rude not to feature the man who is widely regarded as the founding father of the discipline. He certainly is the spiritual father of IChemE, and the Institution to this day has its headquarters in the building that bears his name.

Therefore, please allow me to introduce you to George E Davis.

Davis is the author of the seminal A Handbook of Chemical Engineering, published in 1901. In it, he defines the attributes and functions of the chemical engineer and makes a compelling case for why chemical engineering should be considered a stand-alone discipline, separate from applied chemistry, chemical technology or the person who at the time most commonly filled the role we’d now reserve for the chemical engineer, the ‘mechanical engineer with a little knowledge of chemistry’.

Davis first made his case in a series of 12 lectures at Manchester Technical School (which would later become the University of Manchester Institute of Science and Technology, or UMIST) in 1887, and expanded on it with the publication of the Handbook 14 years later. His assertion that there was a real and urgent need for people properly educated in both engineering and chemistry was rooted in many years of experience working in the chemicals industry, particularly the experience he gained as a plant inspector.

A fascination for chemistry

Davis was born in 1850, the son of a bookbinder. Initially apprenticed to his father’s trade, he found bookbinding did not agree with him; instead he wanted to follow his passion for chemistry.

Working at the local gas works, Davis became a part-time student, first at the Slough Mechanics’ Institute and later the Royal School of Mines, which – according to his friend and longstanding assistant Norman Swindin – was one of the few places chemistry was taught at the time. From the start, he was fascinated with industrial processes. “Before he was 20 he was experimenting with a Mr Wadeson of the Windsor Gas Works in extracting benzoyl from coal gas,” Swindin said in a 1953 memorial lecture on Davis’ life.

In 1870 Davis started a ‘proper’ job, as works chemist in a bleach factory near Manchester. Several more positions at other bleach and alkali companies followed, giving Davis a sound understanding of the processes and chemistry involved.

This stood him in good stead when, ten years later, he was offered the position of alkali inspector. Alkali inspectors were appointed by the Crown to enforce the Alkali Act of 1864, arguably the first piece of environmental legislation in the UK. Its purpose was to limit the pollution caused by the nascent chemicals industry, chiefly the Leblanc soda works – the invention of another chemical engineer who changed the world, Nicholas Leblanc (see tce 838, April 2011). Before the Act came into force, these early soda plants released an estimated 1,000 t/week of hydrochloric acid into the atmosphere in the UK alone. To curb this, the Alkali Act stipulated that plants should condense at least 95% of ‘muriatic acid’ (the historic term for hydrochloric acid); the inspectors’ role was to ensure this happened.

This work gave Davis a first-hand look at the design and management of many of the chemical plants at the time. He was frequently shocked at what he saw, Swindin says. “He [was] often amazed at the poor design and through the works being managed by people totally ignorant of engineering and chemistry. [...] The knowledge gained as inspector must have driven him to strive for the training of more competent managers, and engineers – in fact, his quest for the chemical engineer.”

His work as inspector also gave Davis the opportunity to compare different designs, and allowed him to compile tables comparing performance statistics. However, in the long run the job disagreed with Davis, who disliked the amount of travelling it entailed and the recalcitrant and incompetent managers he had to deal with – especially as, Swindin tells us, diplomacy was not the strongest point for the straight-talking Davis.

Even so, the experience was formative, and coloured all of his later work, Swindin said. “Most of his inventions and processes arise from his intense disgust with the methods of manufacture which polluted the air, rivers and watercourses and wasted good land for tips.”

Davis returned to more hands-on work, managing the Rockingham Gas works near Barnsley in Yorkshire, and then as a consultant based in Manchester.

Most of his inventions and processes arise from his intense disgust with the methods of manufacture which polluted the air, rivers and watercourses and wasted good land for tips.

No Society of Chemical Engineers

The SCI was born as a broad professional institution for industrial chemists and chemical engineers after a campaign a year earlier to form a Society of Chemical Engineers ended in failure. Davis had passionately argued for the creation of an institution for “chemists with a thorough knowledge of physics combined with a fair knowledge of mechanics”, a skillset he felt was much needed though in short supply. “Many processes can be carried on very successfully by chemists in the laboratory, but few are able to make chemical processes go on the large scale, and simply because they have a lack of physical and mechanical knowledge combined with their chemistry,” he wrote in a letter to the editor of the Chemical News in June 1880. “Such men are not very plenty we know, but they would, by forming such a society, help to diffuse that knowledge through the next generation, if not in the present.”

Alas, Davis and his compatriots concluded after a little more research that there were too few people with this combination of skills to make his new society viable, and thus a more broad-based body was born in the form of the SCI, with Davis as its first honorary secretary and Henry Roscoe in the chair. Indeed, at the SCI’s first general meeting there were only 15 chemical engineers among the society’s 297 members. It would be another 42 years before the numbers had swelled sufficiently to realise Davis’ dream, with the creation of the Institution of Chemical Engineers in 1922.

It was during his time as a consultant in Manchester that Davis gave the groundbreaking series of lectures at the Technical School. While many of the details of the lectures were nothing particularly new – indeed they drew heavily on Davis’ extensive experience of the industrial practice prevalent at the time – what was novel was the way that Davis had organised the lectures into concepts and operations common to many different kinds of chemical plant. It was a radical departure from the more prevalent compartmentalised view with its narrow focus on individual industries such as acid manufacture, brewing, or alkali production.

Writing Davis’ biography, Don Freshwater noted: “He argued that all processes could be broken down into a relatively small number of operations which, when studied in the abstract, revealed certain general principles which were applicable to any process. Although he did not coin the term ‘unit operations’ [the further development of the concept, along with the coining of the term, would fall to Arthur D Little in 1916 (see tce 841, July 2011)] his writings show an awareness of the concept.”

Little’s friend Warren Lewis, professor at MIT and another shaper of the discipline, commented: “What Davis saw, but was unable to get his professional colleagues to see, was that the problems of the chemical industry were engineering problems and that their successful solution required the application of the engineering method.” He pointed out that, as well as appreciating the basic concept of unit operations, his even more important contribution was applying this to his teaching. What made Davis’ Manchester lectures so special, Lewis said, was that he taught fundamental scientific principles and general engineering application, and not the specific industries that might use them.

Davis received many requests to publish the content of his lectures but his busy work schedule prevented him from doing so until the publication of the Handbook in 1901, by which time the content of the lectures was much expanded and updated to take account of the technical developments that had taken place in the intervening years.

In his introduction, Davis sought to define the work and duties of the chemical engineer, and points out the huge contribution chemical engineers – whether they operated under that term or not – had already made.

“Though chemical operations are now much more intricate than they were a quarter of a century ago, they are carried out less expensively, more completely and with greater safety to the workpeople, and at least the moiety of this improvement must be credited to the chemical engineer.”

“The three main objects of the chemical engineer should be: first, to so design his plant that the operations performed within should approach as nearly as possible to the theoretical limit [of the conditions imposed by mechanics, chemistry and physics]. Second, [that the plant is designed] to need a minimum of repairs and, when repairs have to be executed, [this can be done] quickly, easily and, if possible, without disturbing the regular cycle of operations.”

Davis stressed that many of the skills, processes and principles used in chemical engineering are common to a broad swath of industrial applications.

He wrote: “Chemical engineering deals with the construction of plant necessary for the utilisation of chemical reactions on the large scale, and with the maintenance and repair of such plant while it is in use, and, without in any way specifying the industry in which such plant is to be used, there are many data common to all chemical processes which must form the starting points of the designer.”

As such, Davis considered chemical engineering fundamentals such as construction materials, steam production and distribution, transporting solids, liquids and gases, heat transfer, separation processes, evaporation, crystallisation and so on.

The Handbook was an instant success – so much so that an expanded and updated second edition followed in 1904. In the preface to the second edition, Davis admitted that “the subject of chemical engineering has proved to be interesting to a much larger number of those engaged in the chemical and allied industries than was first believed.”

The aim of all chemical procedures should be the utilisation of everything and the avoidance of waste. It is often cheaper to prevent waste than to attempt to utilise a waste product.

Sustainable from the start

Perhaps most remarkably to a present-day reader, Davis was a pioneer of sustainability. His years as alkali inspector and his abhorrence of the extremely wasteful and polluting Leblanc process, which in its early forms produced copious amounts of hydrochloric acid and sulphur waste, shine through when he extols: “The aim of all chemical procedures should be the utilisation of everything and the avoidance of waste. It is often cheaper to prevent waste than to attempt to utilise a waste product.”

For all those who thought that the focus on sustainability was a relatively new thing: think again. Turns out it has been a fundamental tenet of chemical engineering from the very start

Chemical Engineers Who Changed the World People The Profession