Charles Edward Howard and Norbert Rillieux made a sweet life for themselves by improving sugar refining, says Trevor Evans. But what of the slaves? 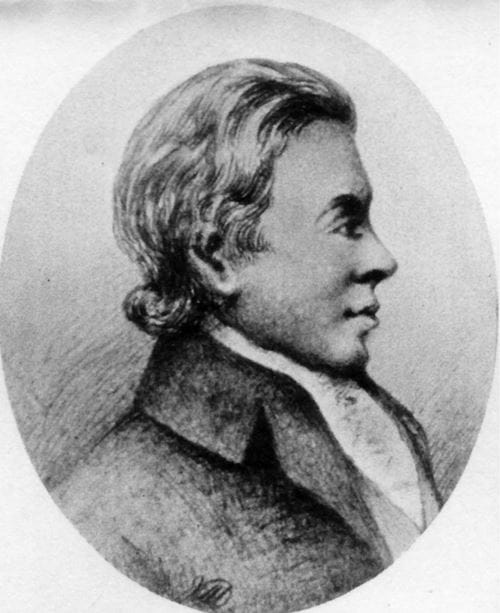 THE prospects at birth for Edward Charles Howard and Norbert Rillieux could scarcely have been more different, yet these men have been recognised as two of the most significant figures in the ‘prehistory’ of chemical engineering.  The former was born, in 1774, a scion of England’s premier ducal family, the younger brother of the12th Duke of Norfolk. In stark contrast, the latter, born thirty years later, was a ‘quadroon libre’, the son of the slave Constance Vivant, who was the ‘placée’ or common-law wife of Vincent Rilleux, owner of a Louisiana sugar plantation. 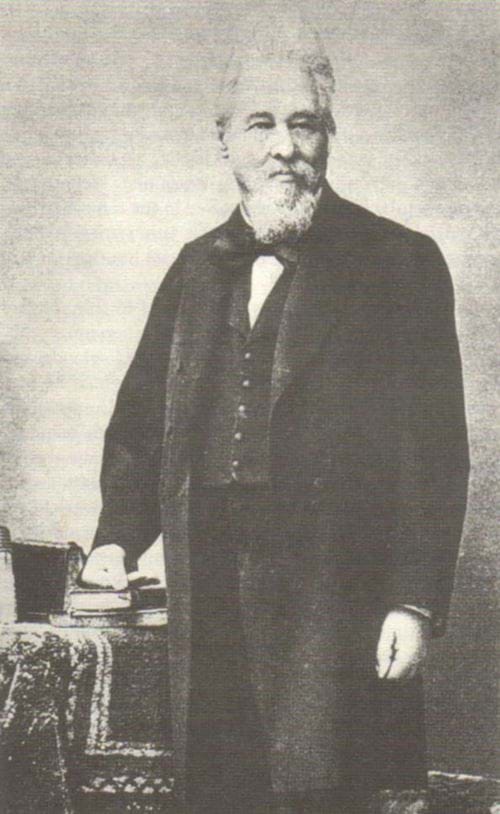 Norbert was indeed fortunate to be adopted and acknowledged by his father, who arranged for a private education through the US Catholic school system in New Orleans, an unusual good fortune for a ‘person of colour’. At school Norbert showed such talent that he was subsequently sent to Paris and the École Centrale to continue his education.

Howard too, as a member of England’s most distinguished recusant family, received an education in France at the Catholic English College at Douay, though the French Revolution cut short his formal education. His scientific knowledge appears to have been essentially self-taught , although amongst his forebears there was a tradition to pursue an interest in the sciences.

The year 1799-1800 has been described as Howard’s ‘annus mirabilis.’ He was elected a Fellow of the Royal Society, became a member of the Royal Institution and published his seminal paper on mercury fulminates, in which he described their preparation, chemical properties and detonating power, for which he received the Society’s Copley Medal. Subsequently, Howard’s other major scientific achievement related to research on metallic meteorites, determining experimentally that their composition was a nickel iron alloy not otherwise found on Earth, an important contribution to establishing their cosmic origin.

Having made these two notable contributions to chemistry, Howard turned his mind to an industrial problem – the refining of sugar. It was for this that Dudley Newitt, in his 1951 presidential address to IChemE, described him as “the first chemical engineer of any eminence”. Newitt tells us that through the influence of his father-in-law, a well known London sugar refiner, Howard was appointed consultant to the West Indian Association of Merchants and Planters.

The human cost of sugar

The enormously wealthy sugar plantations in the Caribbean, Louisiana and Brazil were an intensive agro-industrial system. Harvested cane had to be processed within two days of cutting, at a ‘rate of exchange’, in 1800, of one slave life per two tons of sugar. Slaves had a working life expectancy of only  seven to ten years due to under-nourishment, gross overwork, accident, sadistic punishment and in the case of female slaves, pregnancy and sexual predation. Slave numbers could not be maintained except by trading and importing, despite efforts to ‘encourage’ breeding.

To extract the juice the cut cane was crushed in a three roller mill, where a cutlass was kept at hand to sever a limb should a slave be drawn between the rollers. Boulton and Watt’s steam engines were starting to replace plodding mules, greatly increasing the pace of milling.

The juice from the mill flowed in a wooden gutter to the boiling house into a series of four or five flat-bottomed copper kettles of decreasing size – the ‘Jamaica train’, in which the juice was repeatedly boiled and thickened to a syrup. ‘Milk of lime’ and ox blood were added to the boiling sap to clarify the solution. Slaves skimmed off the coagulated impurities and  manually transferred the liquid into successive pans using long-handled dippers. Scalding and burns were commonplace and fire from spilled liquor a major hazard. Finally the syrup reached the ‘strike point’ at which it was cooled and poured into pots to drain, where it produced loaves of impure semi-refined sugar. This was then exported to England where a similar process was used to turn it into refined sugar.

The apparatus that Howard devised to replace the open vessels of the Jamaica train, together with ancillary equipment such as an efficient, multiple system of filter units,  was the vacuum pan (Figure 1). His 1813 patent on vacuum evaporation (No. 3754, ‘Preparing and refining sugar’) explained the relationship between pressure and boiling point (allowing reduced process temperature to avoid caramelisation and burning) and the several novel devices he originated for sampling and operating vacuum vessels. The evaporation of the purified solution to the point of crystallisation was revolutionised to produce a much improved product.

Manufactured by Boulton and Watt, the equipment was immediately successful, and adopted by European refiners and plantations in the Americas. In 1816, Howard’s royalty income was reported to exceed £60,000, a massive sum for the period (equivalent to around £2m today). He probably did not get to spend his fortune: Howard died from a haemorrhage that same year, aged only 42.

While Howard is largely forgotten today, at the time he was recognised and well regarded by his peers. In William Walker’s group portrait of some fifty ‘Distinguished Men of Science of Great Britain Living in the Year 1807-8’, he stands alongside William Herschel, Joseph Banks, Henry Cavendish, Humphry Davy and John Dalton. 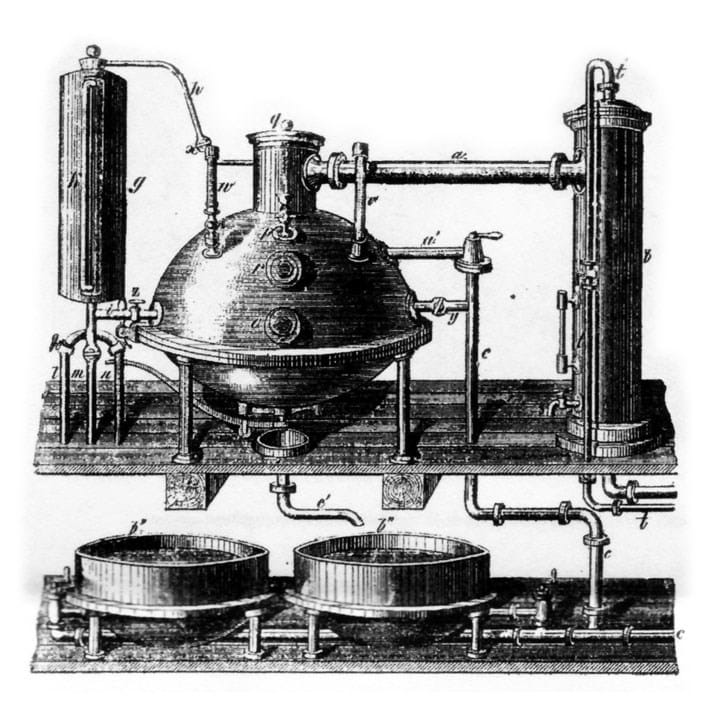 Meanwhile, at the École Centrale in Paris, Rillieux had excelled in physics, mechanics and engineering, and was appointed on graduation an Instructor in Applied Mechanics. Remembering the misery of open pan sugar refining on his father’s plantation, he wanted to apply his knowledge of thermodynamics to sugar refining. Rillieux returned to New Orleans, where he constructed a large triple effect evaporator, stimulated by Howard’s earlier work. His improved design (Figure 2) was patented in 1843 (US 3237). The apparatus used the heat of vaporisation from the steam in the first evaporator (as it condensed), to heat the more concentrated sugar solution in the second evaporator. The second evaporator required less heat than the first because the elevated pressure reduces the boiling point of the sugar solution and so on.

The toast of Louisiana

After several trials he had a working system. Prize winning sugar quality at reduced fuelling cost, and payback of investment within one year – it’s hardly surprising that Rillieux became, in the words of a contemporary, “the most sought-after engineer in Louisiana”. But since he was ‘of colour’ – he was one quarter black – he could neither be entertained nor lodged on plantations. As the Civil War approached, he was required, under the notorious racial codes, to carry a pass in his own home city of New Orleans.

Disappointed when his plans to drain the wetlands surrounding New Orleans and rebuild its sewers to eliminate yellow fever epidemics were rejected because of his colour, he returned to France, only to learn that a similar proposal, put forward by a white engineer, was to be implemented.

Back in France, he returned to the École Centrale, of which he was to become Principal, but subsequently gave up engineering to work on translating hieroglyphs at the Bibliothèque Nationale, working with the Champollions, brother and nephew of the decoder of the Rosetta Stone.

Rillieux made a brief return to engineering in 1881, when he proposed a new multistage system for sugar beet processing and designed a diffusion process for cane processing in Egypt. But he failed to get government support and gave up engineering once more.

Today equipment based on the inventions of Howard and Rillieux can be found operating across a range of process industries, with multiple effect evaporation employed even on the space shuttle. Latterly Rillieux has been recognised by the American Chemical Society who have designated his multi-effect evaporator as a National Historical Chemical Landmark.

Aged 87, Rilleux died a rich man and is interred in a vault at Père Lachaise Cemetery in Paris. In contrast, Howard’s grave is lost; the burial ground of Old St Pancras Church obliterated by a railway cutting in 1868.

Slaves did not see a great improvement in their lot overall. While the processing of sugar became a little less dangerous and arduous, the  increased profitability meant that even more sugar had to be planted. This required, in the words of Richard Sheridan, more “cane holes to be dug by slaves who were drawn out in a line, like troops in a parade, goaded on by drivers wielding whips, raising and dropping down their hoes in unison.” Twelve months later the sugar would be harvested to feed the rapacious jaws of the steam mill, so as to meet the sugar demands of the consumer of the refined product in Europe and America.

As the chemist and sugar historian Noel Deerr wrote: "in conclusion, it may not be out of place to point out how great is the debt of chemical engineering to the sugar industry. Here have either been invented or developed the roller mill, evaporation in vacuo and in multiple effect, the filter press in its manifold forms and the centrifuge."

Former CEO of IChemE and ATSE