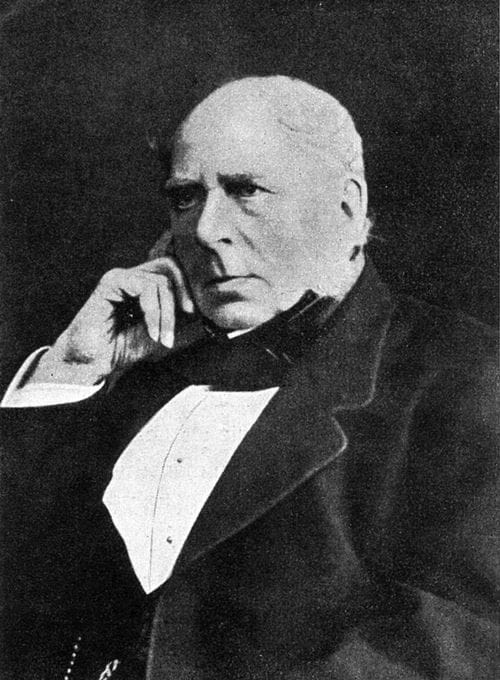 Patented in 1855, the Bessemer process decreased the cost of steel from £50–60/t ($80–95/t) to £6–7/t ($9–11/t), hand-in-hand with vast increases in scale and speed of steel production. Steel girders for bridges, buildings, railroads, skyscrapers – all were unimaginable before Bessemer. The same goes for modern steel ships, steel wire, high-pressure boilers (and with them, the steam engine), not to mention turbines for power generation. It’s an impressive list that underpins just about everything we recognise as modern life.

Henry Bessemer was born in 1813 near Hitchin in Hertfordshire, UK. His father, Anthony, spent some years working for the Paris Mint, where he had developed a machine for the production of steel dies that was used to make medallions. While there are no records of Bessemer having received any kind of formal further education, he did gain some experience in metallurgy in his father’s foundry.

Throughout his life, Bessemer was a prolific inventor, and he had at least 117 patents to his name. The patents largely revolve around manufacturing processes, spanning iron, steel, sugar, glass, ordnance, and even a ship with gimbal-mounted cabins so that passengers would not get sea-sick (as Bessemer himself frequently did).

Among his early inventions are a machine for the production of very fine brass powder (used to make ‘gold’ paint) at 1/40th the cost of the then-standard process; a typesetting machine; a way of compressing graphite powder into solid graphite for pencils; and a screw extruder for extracting sugar from sugar cane. Not all his inventions were commercial successes: a 1848 process for producing a continuous strip of plate glass did not find commercial backing – but the experience with furnaces that Bessemer gained from the exercise proved to be invaluable.

Bessemer’s interest in steelmaking was sparked by the outbreak of the Crimean War in 1853. His first war-inspired invention was a grooved artillery projectiles that could be fired from smooth-bore guns. But the French commandant to which Bessemer was demonstrating the projectiles believed that they were too heavy to be fired safely from cast iron guns, which were notorious for shattering. Bessemer knew that steel would not have this limitation, but its cost at the time made it far too expensive to use in mass-produced weapons.

At the time, steel – essentially de-carbonised iron with a few added other elements – was far too expensive to be used in any large quantities and its application was restricted to cutlery, springs, and the like. The main source of steel at the time was so-called Blister steel, produced by heating carbon-free wrought iron from Sweden, which was naturally low in impurities, between layers of coal for up to six weeks at a time. This did add sufficient carbon to produce steel, but was a very laborious and time-consuming process. Instead, engineers used cast iron for everything from bridges to ships and railway rails.

Bessemer set out to find a way of making steel from brittle pig iron, which contains significant amounts of carbon. For his initial experiments he used a reverbatory furnace, which isolates the metal from the combustion fuel. But during a test, a few pieces of pig iron laying a little to one side in the stream of hot air refused to melt,even when Bessemer raised the temperature. After a while, Bessemer discovered that contact with the hot air alone had turned the outside of the ingots into steel shells. He later wrote in his autobiography: “Thus a new direction was given to my thoughts, and after due deliberation I became convinced that if air could be brought into contact with a sufficiently extensive surface of molten crude iron, it would rapidly convert it into malleable iron.” (Unbeknown to Bessemer, the American William Kelly had made a very similar discovery around the same time, though financial troubles would later force him to sell his patent to Bessemer.)

Bessemer reconfigured his furnace to force cold air straight through the molten iron, even though his foundry workers told him the idea was foolish and the air would cool the iron. But Bessemer was proved right: airflow causes silicon and carbon to oxidise in an exothermic reaction, which – counterintutively – raises the temperature of the process.

The first time he tried the new process, Bessemer would discover just how violent this reaction could be. He wrote: “All went on quietly for about ten minutes; sparks such as are commonly seen when tapping a cupola, accompanied by hot gases, ascended through the opening on the top of the converter, just as I supposed would be the case. But soon after, a rapid change took place; in fact, the silicon had been quietly consumed, and the oxygen, next uniting with the carbon, sent up an ever-increasing stream of sparks and a voluminous white flame. Then followed a succession of mild explosions, throwing molten slags and splashes of metal high up into the air, the apparatus becoming a veritable volcano in a state of active eruption. No one could approach the converter to turn off the blast, and some low, flat, zinc-covered roofs, close at hand were in danger of being set on fire by the shower of red-hot matter falling on them. All this was a revelation to me, as I had in no way anticipated such violent results. However, in ten minutes more the eruption had ceased, the flame died down, and the process was complete. On tapping the converter into a shallow pan or ladle, and forming the metal into an ingot, it was found to be wholly decarburised malleable iron.”

All attempts to make the reaction less fierce failed and Bessemer concluded that speed (the whole process was complete in around 20 minutes), extreme heat and violent eruptions were all the necessary hallmarks of successful steel production. Instead, he devoted considerable time and thought to designing a reaction vessel that would contain the process as safely as possible.

After some experimentation, he designed the reaction vessel as a long ovoid with plenty of headroom for molten metal to spark and erupt without leaving the converter, and the characteristic offset outlet, or ‘mouth’. The converter was pivoted on trunnions so that it could be tilted to receive the charge and pour the molten steel into ladles or moulds. The capacity varied between 8–30 t of molten iron, though most converters were designed to carry a charge of 15 t.

The process was patented in 1855, though iron companies initially failed to produce the high-quality steel they’d expected; excess oxygen left the steel brittle and it was difficult to retain the right quantity  (of between 0.2–2.1% by weight) of carbon in the steel. Bessemer’s solution, which was to stop the airflow before all the carbon was converted, took a lot of trial and error to perfect. An easier solution was proposed by the metallurgist Robert Mushet, who suggested burning off all the carbon and then adding a precise quantity of Spiegeleisen, an iron-carbon-manganese alloy. This made it relatively straightforward to ensure the steel contained precisely the right quantity of carbon, while the manganese removed excess oxygen from the steel. This improved Bessemer process was first licensed in 1865, to the Dowlais Iron Company in Wales.

From Sheffield to Detroit

Bessemer also decided to commercialise the process himself and in 1859 founded the steel firm Henry Bessemer and Company in Sheffield, which already had a worldwide reputation for its steelmaking expertise. In the US, the earliest Bessemer converters were built near the city of Detroit, the starting point for the city’s later rise as the capital of the North American car industry.

Even with Mushet’s improvements, Bessemer’s process was unable to remove excess phosphorus, which caused the steel to be brittle unless it was produced from non-phosphoric iron. That problem was eventually solved in 1879 by Sidney Gilchrist Thomas, who introduced a refractory lining to the converter. Depending on the quality of raw iron being smelted, the refractory lining can either consist of clay (known as the acid Bessemer process, and used for non-phosphoric iron) or dolomite, limestone or magnesite. In this so-called basic Bessemer, the lime reacts with the phosphorus to form phosphate of lime, which can be removed and used as an agricultural fertiliser.

The Bessemer process remained in use for over 100 years, and the final Bessemer converter only ceased production in 1968. Today, the process has been replaced by the electric arc furnace and the basic oxygen process, which allows more scope to add alloys, and offers more time to analyse the chemical composition of the steel. Bessemer converters also struggled to remove phosphorus from steel and did not lend themselves to recycling significant quantities of scrap metal.

When Henry Bessemer died in 1898, he had become a very wealthy man, and had lived to appreciate the huge impact of his innovation. At the time, the global annual production of Bessemer steel ran to £84m – an astronomical sum for the time. Bessemer’s son, Henry Jr, estimated that a column of solid gold worth £84m would have to be 5 ft (1.50 m) in diameter and over 109 ft high. Henry Jr remarked: “It is an interesting fact that the statistics […] show that it would take more than three years’ production of all the gold mines in the world to pay in gold for one year’s production of Bessemer steel.”

Paul Héroult and Charles Hall – Turning a Rarity into a Commodity