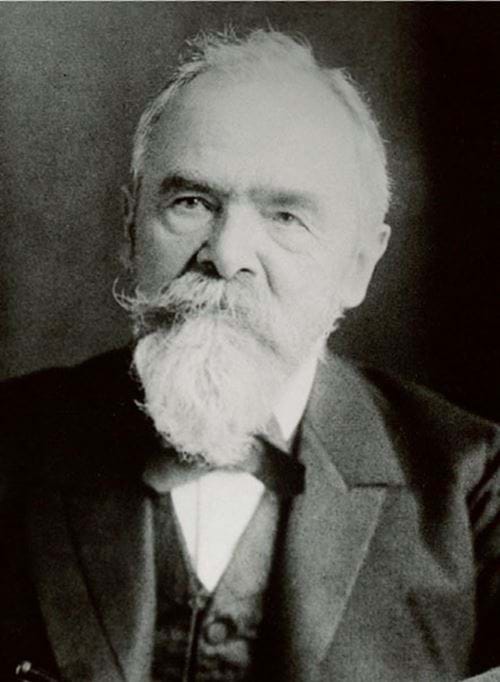 BEER has a lot to answer for, and not just beer bellies. Beer is also to blame for some key technologies that underpin modern industry, and the chemical engineering processes that made them possible.

When the Guinness brewery in Dublin asked a German engineer to supply liquid carbon dioxide so that it could produce beer with a characteristic ‘head’, it probably didn’t expect its query to lead to the development of the air separation process which in turn laid the foundation for today’s $60b/y industrial gases industry.

Neither did said German know that working independently but very much in parallel was an Englishman – not even an engineer but a classics graduate and barrister – who would ultimately pip his patent for the process to the post by a few weeks.

Carl von Linde and William Hampson were not the first to liquefy air – since the late 18th century, a variety of researchers had managed to liquefy a range of gases. However, early processes were time-consuming, expensive, and not suitable for commercial application on an industrial scale.

A mechanical engineer by training (much to the disappointment of his father, who had wanted him to become a Lutheran minister), von Linde had an early interest in refrigeration. His company, Gesellschaft für Linde’s Eismaschinen, sold refrigerators to breweries, slaughterhouses and cold storage facilities.

These early fridges revolutionised the brewing industry: lager is a bottom-fermenting beer and the process requires temperatures of 0–5ºC to work. For that reason, brewing beer used to be restricted to the winter months; the beer then had to be kept in a cold cellar over the summer. Hence also the name: “lager” is German for “storage”. Von Linde changed this, and for the first time, breweries could produce beer all year round.

While von Linde’s refrigerators revolutionised brewing, the brewery industry repaid the favour by giving him the crucial idea that would lead to air separation. It was the Irish brewery Guinness which, in 1892, contacted Linde’s Eismaschinen to see if the company could provide a machine that would produce liquid CO2. The company had never built such a machine, but von Linde accepted the order regardless. It was during the development of this CO2 liquefaction process that von Linde had the idea of using air itself as a refrigerant by exploiting the Joule Thomson effect.

Joule and Thomson had noticed that as a gas expands, it gets colder. The cooling effect is relative to the degree of compression prior to expansion, and pre-cooling the air exponentially increases the cooling effect of the Joule-Thomson effect. Von Linde built the effect into a virtuous circle, by reducing the pressure of compressed cold air in a counter-current heat exchange. A quantity of compressed air, pre-cooled to -30ºC, would enter the heat exchanger where the pressure was released and the gas expanded. Now the Joule-Thomson effect would reduce the temperature of the gas even more. Since this happened in the heat exchanger, with the incoming compressed air flowing through the neighbouring pipe, this would cool the next batch of air even further than the previous one. The cooling effect increases and with every air intake the air gets colder, until, at around -190ºC it turns liquid.

Key to the process was the heat exchanger consisting of a 100 m long double steel tube, wound to a spiral, insulated with wool and placed in a wooden case.

Von Linde later recounted: “Happy and excited, we watched the temperature drop according to the effect described by Thomson and Joule, even after we had far surpassed the limits within which those researchers had worked.” It took three days for the apparatus to get cold enough, but when it finally reached that point, on 29 May 1895, von Linde was jubilant. “With clouds rising all around it, the pretty bluish liquid was poured into a large metal bucket. The hourly yield was about three litres. For the first time on such a scale air had been liquefied, and using tools of amazing simplicity compared to what had been used before,” he wrote. 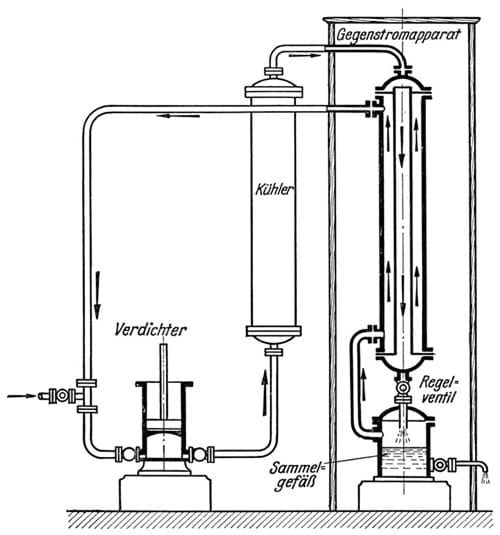 Von Linde registered his patent on 5 June 1895. However, Hampson beat him to it by a mere two weeks – his preliminary patent was registered on 23 May. Both men devised very similar machines, relying on the same principles and using very similar processes, and the process is today known as the Hampson-Linde cycle.

Hampson was an unknown, and it remains a mystery what might have perked his interest in sciences and engineering – indeed there is no record that the Oxford classics graduate and barrister had any scientific training at all.

His process was somewhat simpler than von Linde’s. Air was compressed to 150 atm, expanded to 1 atm (without pre-cooling), and passed though a baffled heat exchanger where it would cool the incoming compressed air. The process was power-hungry, consuming 3.7 kW/h, and yielded 1 l/h of liquid air. Compared with von Linde’s, it took up less space and took only 20 minutes to produce liquid air, while von Linde’s initially took three days.

Von Linde soon improved his process by substituting the steel tubes of the steel heat exchanger for copper and by raising the initial compression of the air to 200 atm. Progressive improvement reduced the liquefaction time first to 15 h, then to 1 h, and eventually only 15 min. 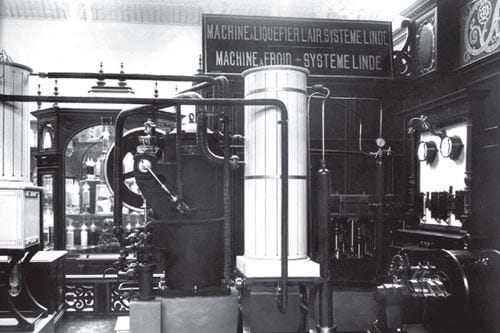 Demonstration units wowed the people, and von Linde was thrilled when at the 1900 World Fair in Paris, his air liquefaction apparatus took the coveted Grand Prix.

Meanwhile, Hampson concentrated on demonstrating his process in industry, and installed his apparatus at the recently-founded Brin’s Oxygen Company, the company that would later become the industrial gases giant BOC.

Neither Hampson nor von Linde managed to liquefy hydrogen, which because of its low boiling point and low inversion point – the temperature below which it must be cooled for the Joule-Thomson effect to work – proved a tough nut to crack. It was the Scottish chemist James Dewar who eventually succeeded, in May 1898, using von Linde’s process in a nitrogen-cooled vacuum-insulated container he’d developed – the so-called Dewar flask, better known today as a Thermos flask. Dewar vessels became invaluable for storing and transporting liquid gases, and remain in use to this day.

While liquefied air was a nice curio, the commercial interest lay in separating the air to produce pure oxygen and nitrogen. Von Linde’s early separation via fractionation rested entirely on the different boiling temperatures of oxygen and nitrogen, of -183 ºC and -196ºC respectively. The differential was too small to fully separate the two gases – the best von Linde could arrive at was a 50/50 mixture of oxygen and nitrogen. This so-called “Linde Air” found a ready market as a chemicals feedstock initially, but increasing demand for pure oxygen followed.

Adding a rectification step and allowing the separated oxygen vapour to rise slowly up the same column where liquid air was slowly drizzling down solved the problem. Von Linde’s first oxygen production plant went into operation at Höllriegelskreuth near Munich in 1903, followed by the first nitrogen plant in 1908, and the first combined air separation plant in 1910.

Both gases had plenty of commercial applications. The development of oxyacetylene welding in 1903, coupled with the increased use of metal and steel in construction, drove demand for oxygen and acetylene. Other customers for oxygen were theatres and music halls, who needed oxygen to produce limelight. In the so-called limes, an oxyhydrogen flame was directed at a cylinder of calcium oxide (quicklime) to produce a very bright light.

At the same time Fritz Haber and others were trying to fix nitrogen from air, which led the way to synthetic fertilisers (see also tce 825, March 2010) and created a huge demand for nitrogen. Nitrogen used as a filler gas for incandescent lightbulbs significantly extended their lifespan compared with earlier versions that used a vacuum, and biology researchers soon discovered how to instantaneously freeze samples using liquid nitrogen.

Air separation – specifically, Hampson’s liquid air machine – also paved the way for the discovery of several rare gases. Hampson delivered several batches of liquid air he’d produced with his machine at Brin’s Oxygen Company to William Ramsay at University College London. From these batches, Ramsay in 1898 isolated the noble gases neon, krypton and xenon. The discovery won him the Nobel Prize for Chemistry in 1904.

As for the men themselves, Hampson remained a law unto himself and a mystery. After air liquefaction, he ventured into adult education and wrote early ‘pop science’ literature; studied medicine and practised at several London hospitals as an x-ray specialist (making several improvements to the early x-ray machines along the way); and wrote monographs on social science and economics.  A private man, no photos of Hampson survive.

Carl von Linde meanwhile grew his company into an industrial empire. Today, Linde is one of only four companies which dominate the industrial gases market, a major engineering contractor and a supplier of specialist medical gases.

All in all, it’s impressive where the simple wish for a cold beer with a good head can lead.