AN ICHEME student member is representing the profession on the BBC’s University Challenge – and has emerged victorious from the first round of the quiz show.

James Flannigan, who is in the fourth year of his chemical engineering degree at the University of Strathclyde, was part of a team that beat two-times champion Imperial College London by 145 points to 125.

He spoke to The Chemical Engineer about his journey onto the iconic programme, and what it was like watching Monday’s broadcast – which involved a formidable comeback.

“It really started a good seven or eight years ago when I was still at secondary school. I watched the programme weekly and was – at that age – bad at it!” Flannigan said, “But as you watch more and more, you are slowly able to answer more than just a handful every episode. I tried to get on last year, and then I reapplied this year and managed to do it.”

A student member of IChemE for the past three years, he joined teammates who were studying for qualifications in teaching, economics and mechanical engineering. While he prefers questions about science and engineering, they only make up a small proportion of the questions asked.

“There aren’t a lot of engineers that appear on the programme – I don’t know why that is. My speciality is different from the rest of the teams’, so we were trying to have a broad set of specialisms to have a strong team.”

After sitting tests and undergoing interviews, the four students were selected as one of only 28 teams to reach the televised stages from around 130 applicant institutions.

Twenty-one-year-old Flannigan said that filming actually happened months before Monday’s broadcast, and teams have to be ready to head to the Manchester studios at short notice to face an unknown adversary.

“You don’t find out who you are playing until…the day,” he said, “We didn’t know we were playing Imperial until maybe an hour before we walked out onto the set.”

Most viewers of the programme may wonder how actually taking part may differ from shouting out answers from the sofa at home, and what the fearsome host Jeremy Paxman – famous for grilling politicians – is like in person.

“It’s actually pretty much the same. Honestly! There are no jump cuts, no stopping – you sit down and they ask you one or two starters and a few questions to get you settled in, then Jeremy comes out. Once he starts doing the introduction, that’s it. 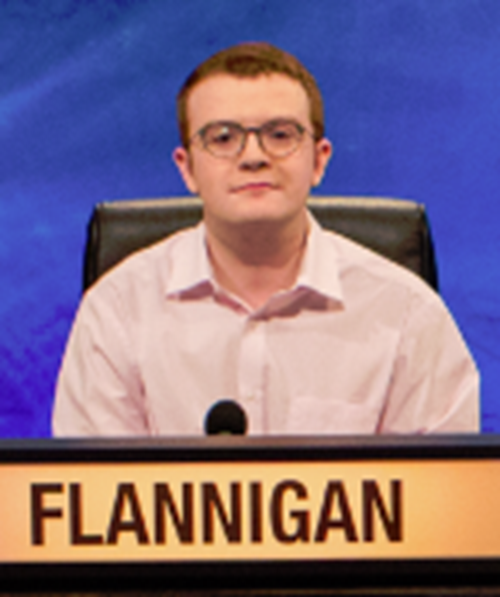 “When you’re buzzing to answer a question he looks directly at you, so it is completely terrifying to answer. But he was a nice man! Obviously the persona you see with politicians – he’s not that way all the time.”

Flannigan correctly answered one “starter for ten” – the show’s iconic initial question where you go head-to-head against your opponent – and contributed to several other answers given by the team’s captain.

However, this was only after conceding enough ground to Imperial to lead Paxman to quip: “You seemed to be asleep in the first half”.

Flannigan said: “There was a moment in it where the score was 90–15 and it looked like it was only going one way. The situation looked dire!

“It is stressful but it is extremely quick when you are actually filming it. It didn’t feel like 30 minutes doing it, but watching it again on Monday night it felt like three hours!”

The team do not know who they will face in the next round, or when it may be, but Flannigan knows what his ideal match-up would be.

As to whether his team could go all the way, he said that it’s all down to the luck of the draw.