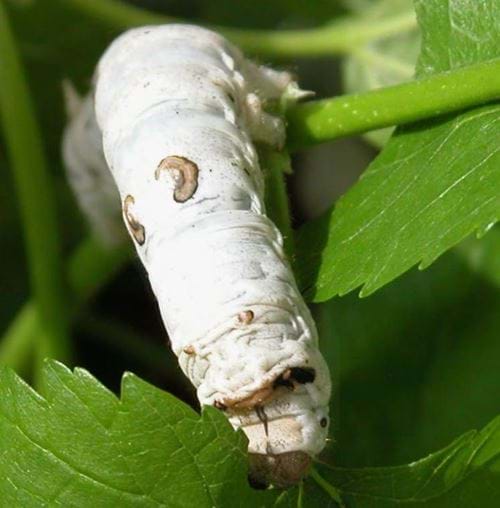 Silk from the Chinese silkworm was used in the study

BIOCOMPATIBLE, biodegradable silk cocoons capable of being accurately spun on a nano-scale could be used to protect sensitive molecules, according to researchers.

The storage and administration of beneficial – yet sensitive – molecules, such as functional antibodies, is a challenge in many industries. A conceptually simple, but powerful, solution is to put the molecules inside tiny capsules. These are typically made from synthetic polymers, which can be a complex and energy-intensive process, often involving materials that are neither biocompatible nor biodegradable.

Now, a sustainable, low-energy alternative using natural materials has been described by a group of collaborating researchers from the Universities of Cambridge, Oxford and Sheffield in the UK, the Weizmann Institute of Science in Israel, and ETH Zurich in Switzerland.

The team used silk from the Chinese silkworm Bombyx mori, which is a natural structural material of much academic interest. Co-author of the study Chris Holland said: “Silk is amazing, because whilst it is stored as a liquid – spinning transforms it into a solid. This is achieved by stretching the silk proteins as they flow down a microscopic tube inside the silkworm.”

To imitate this, the researchers extracted proteins directly from the glands of silkworms, and placed them inside microscopic channels on a chip made of a silicon-derived polymer. This caused the protein molecules to self-assemble into a gel-like material that then formed capsules that were 300 nm to >20 µm in size. Control over size and shape was achieved by controlling the viscosity of the silk protein solution and the forces acting upon it.

The natural silk proteins remained intact inside capsules for an unlimited amount of time without losing their properties or ability to function. The paper also described successful tests in using the capsules to increase the stability and lifetime of an antibody that acts on a protein implicated in Parkinson’s Disease. The authors believe that the capsules may contribute significantly towards future therapies for such neurodegenerative diseases, as they can penetrate the blood-brain barrier to deliver treatment.

The technology’s biodegradability and biocompatibility could also be applied in tissue engineering, such as for improved biological implants, or in the food industry to incorporate healthy particles into food.

Holland told The Chemical Engineer that the microfluidic platform developed at Cambridge is already well-suited to scale up the process for commercialisation. However, the main challenge would be finding a way to produce large amounts of natural material.

He said: “At the moment the liquid feedstock is extracted in small amounts directly from silkworms, but we would really like to be able to derive a feedstock from already-spun cocoons that are then resolubilised. This would allow us to access the global market of 100 kt/y of agricultural silk production for reprocessing.

“There are groups and companies around the world already exploring this, as are we, and so it won’t be long before that is a solvable problem and the real potential of this technology can be unlocked.”