Research at Virginia Tech could lead to novel, slippery packaging that will reduce food waste

FANS of fast food know how tricky it is trying to squeeze out the last drops of ketchup from those tiny, convenient sachets. Now, thanks to a novel, super slippery plastic film developed by researchers at Virginia Tech, that little annoyance could become a thing of the past.

The team has discovered a novel technique for impregnating commonly extruded plastics with chemically compatible oils. The technique – for which a provisional patent has been granted – could help reduce food waste by making it easier for sticky foods, such as condiments, dairy products, and beverages, to escape its packaging.

The idea of impregnating porous surfaces with lubricant to achieve increased slipperiness is not a new one. In 2011, researchers at Harvard University discovered slippery liquid-infused porous surfaces, or SLIPS.

Impregnating porous surfaces to make SLIPS relies on nano/micro-roughness that enables lubricant to be held by capillary action. The materials used must therefore be absorbent or roughened to create suitable surfaces. 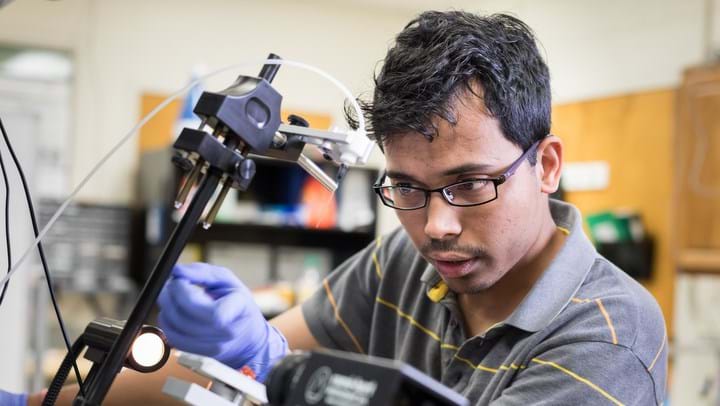 Until now, SLIPS were not suitable for use in large scale, everyday packaging, due to cost, and complexity of multi-layer assembly.

“Previously used SLIPS ... have been made using silicone- or fluorine-based polymers, which are very expensive,” Ranit Mukherjee, lead author, and doctoral student in the biomedical engineering and mechanics department at Virginia Tech said to the university website news service.

Hydrocarbon-based polymers, such as polyethylene and polypropylene, had not previously been considered for use as SLIPS as they had been considered resistant to impregnation by oils.

In fact, polyethylene has even been used as a backing material for SLIPS because of its superb chemical and moisture resistance.

“We made two major breakthroughs” said Jonathan Boreyko, co-author, and assistant professor of biomedical engineering and mechanics at Virginia Tech.

“Not only are we using these hydrocarbon-based polymers that are cheap and in high demand, but we don’t have to add any surface roughness, either. We actually found oils that are naturally compatible with the plastics, so these oils are wicking into the plastic itself, not into a roughness we have to apply.”

While the technique may sound high-tech, it finds its roots in nature, inspired by pitcher plants – carnivorous plants that predominantly feed on insects. The pitcher-shaped leaves – from which the plant gets its name – have a slippery rim that surrounds a deep cavity filled with nectar and digestive enzymes. Once insects land on the rim they become victims of the pitfall traps and slide down the leaves into the belly of the plant.

This feature is being copied by engineers combining lubricant with surface roughness – achieved by using absorbent materials, or by roughening the surface of a material – that locks the lubricant in place. “We’re taking that same concept, but the roughness we’re using is just a common attribute of everyday plastics, which means maximal practicality,” said Boreyko.

Consumers are also expected to support this method over alternative approaches.

“We’re not adding any mystery nanoparticles to the surfaces of these plastics that could make people uncomfortable,” said Boreyko. “We use natural oils like cottonseed oil, so there are no health concerns whatsoever. There’s no fancy recipe required.”

In addition to packaging, the new technology may find widespread use in the pharmaceutical industry. The repulsive nature of the impregnated films causes resistance to bacterial adhesion and growth, making them anti-fouling.

A new whey to drink