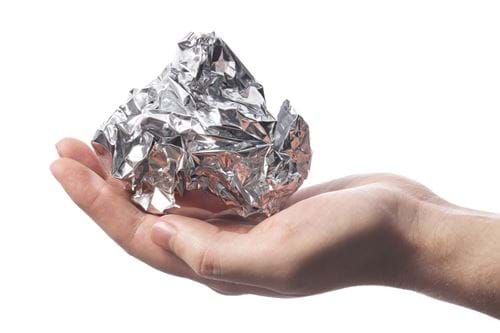 CONTAMINATED foil is unrecyclable as grease and fats damage recycling equipment, so it is often landfilled, but a researcher at Queen’s University Belfast has found a way to turn it into Al2O3 catalysts.

Bauxite mining causes huge environmental damage in West Africa, the Caribbean and Australia so further recycling is desirable. Recycling 1 kg of aluminium waste into new aluminium products saves 8 kg of bauxite, 4 kg of chemicals and 14 kW of electricity, as well as avoiding the production of significant quantities of tailings, red mud, perfluorocarbon and carbon dioxide. This is significant, given that the annual demand for aluminium exceeds 270m t.

Ahmed Osman, an early career researcher from Queen's school of chemistry and chemical engineering, found a new crystallisation technique which can make extremely pure AlCl3 crystals from the contaminated waste foil he collected from around the Queen’s laboratories. These crystals can then be used to make catalysts for the production of dimethyl ether, a promising biofuel, and catalyst supports for use in catalytic converters for natural gas-powered cars.

“There are more than 16m natural gas vehicles (NGVs) in use, however, due to its high stability, burning methane as a fuel is difficult. With a global warming potential of 20 times that of CO2, any release of unburned methane is problematic. Presently there are no catalytic converter technologies to treat unburned methane in an engine exhaust,” Osman told The Chemical Engineer.

Osman dissolved the aluminium foil samples in 6M HCl solution to make a solution of aluminium chloride. This was then kept under a dessicator until the crystals formed. Washing with deionised water and re-crystallisation, repeated three times, left crystals of AlCl3.6H2O with very high purity. They then used these crystals to make Al2O3 catalyst. They dissolved the crystals in deionised water then ammonia was added dropwise and heated, and the precipitate filtered, washed and dried. They used the same process to make catalysts from commercially-available AlCl3 for comparison.

The catalysts made from recycled AlCl3 showed higher catalytic activity in the production of dimethyl ether than those made from commercially-available AlCl3. Some of the prepared Al2O3 was loaded with palladium using a wet impregnation method and tested for its potential as a catalyst support in catalytic converters, where it was again highly effective. In addition, the catalysts from recycled foil are significantly cheaper, costing £120/kg (US$160/kg) rather than £305/kg.

“At Queen's, our scientists and engineers often work hand in hand on common challenging problems for society. By using our joint expertise, we have been able to tackle the issue of sustainable development and come up with a research solution which lies in an area between chemistry and chemical engineering,” said Osman. “This breakthrough is significant as not only is the alumina more pure than its commercial counterpart, it could also reduce the amount of aluminium foil going to landfill while also sidestepping the environmental damage associated with mining bauxite.”

Osman and the team will now look at improving the catalysts further and explore using them commercially for biofuel production and in catalytic converters.