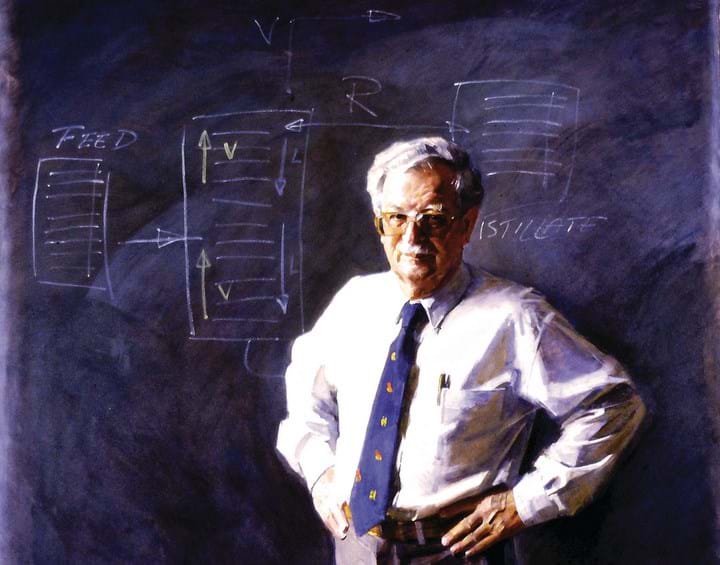 ROLF PRINCE, born in 1928 in Germany, was a legend and a giant of the chemical engineering profession. As president of IChemE in 1986 and as head of the Department of Chemical Engineering at the University of Sydney from 1969–1994, he had an enormous impact on the education of generations of engineers worldwide. He was chairman of the Australian Academy of Technology Science and Engineering and was awarded the Order of Australia and the Centenary medals. His work in distillation and mass transfer made a key contribution to these disciplines, which are arguably central to the profession of chemical engineering. He was a strong advocate for using computers in chemical engineering and brought one of the first computers to the University of Sydney.

Rolf’s mother, from a Jewish family, had the foresight and bravery to get her children Rolf and Renate out of Germany in 1936 to Italy and then in 1939 on to Ireland. Finally, they travelled as refugees in May 1940 through the war-torn English Channel over to New Zealand. Rolf’s education included being among the first cohort of chemical engineering students at Canterbury University College of the University of New Zealand, followed by a PhD at Sydney.

He met his wife Laurel at Canterbury. University life involved moving to Australia in 1950, lecturing at Sydney in chemical engineering, and moving to England in 1953 with the Distiller’s Company, where he and Laurel had their first child. Shortly afterwards they returned to New Zealand, where Rolf taught at Canterbury University. In the 1960s, he took a post at Sydney and in 1964, a professorship at the University of Queensland. In 1969, he was offered the professorship at Sydney, where he remained until his retirement in 1998.

He continued teaching and consulting after retirement, chairing the state government panel on desalination. He had pronounced views about changes to universities (including pay structures, standards, research, corporate sponsorship, teaching methods, female students, and industrially-funded scholarships); chemical disasters at Bhopal, Chernobyl, Three Mile Island and Botany; chemical dumping at sea; and environmental issues. As a measure of his national impact, he received the Peter Russell Medal, and the Order of Australia. He was deeply interested in the recognition of excellence in engineering and organised and led the National Committee for the Awards of Excellence in Engineering, which is continuing in great strength. These awards are given annually at the Australasian Chemical Engineering Conference, Chemeca, where the conference opening plenary lecture has been named in Rolf’s honour.

Rolf started the Chancellor’s Scholarship Scheme in Engineering, then the Major Industrial Project Placement Scheme (MIPPS), which continues to have a major role in industrial interaction and undergraduate education at Sydney, running for nearly 20 years with 15-20 students in the scheme each year. Rolf’s international outlook, seen in his presidency of IChemE, was also seen in the international dimension of MIPPS, with placements in China, Japan, Saudi Arabia, the US and Europe. Indeed, Rolf’s international contacts in Europe, the US and China had both industrial and academic dimensions. Rolf had a very influential role in improving gender diversity through the very successful Women in Engineering campaign during the late 80s and early 90s. Many also personally benefited from the good work of the Chemical Engineering Foundation, of which Rolf was instrumental in establishing during his time as head.

At Sydney, he saw the University Staff Club as an excellent opportunity to develop interdisciplinary research, share ideas, and have a good time. No-one who met him could doubt that he was a person of great character, in the warmest possible way, and he was a gentleman of the old school. In all his dealings with people, he demonstrated kind concern, respect, care and compassion. His idiosyncrasies included a tendency to hold onto library books, but if that is the worst that anyone can say about him, it is a small matter indeed. It could be said that he gave concessions to no-one, regardless of age, and he treated everyone the same, regardless of background. In the Hannaford portrait (pictured, above), we see Rolf’s keen and steady eyes, and his strong passion for chemical engineering. Many have commented on his energy, and his frenetic pace only seemed to increase in his retirement.

He is an example to us all, and we are all the better for having known him. Rolf is survived by his loving family – wife Laurel, children Jane, Peter, and Robin, and four grandchildren.

Written by Timothy Langrish, School of Chemical and Biomolecular Engineering, the University of Sydney