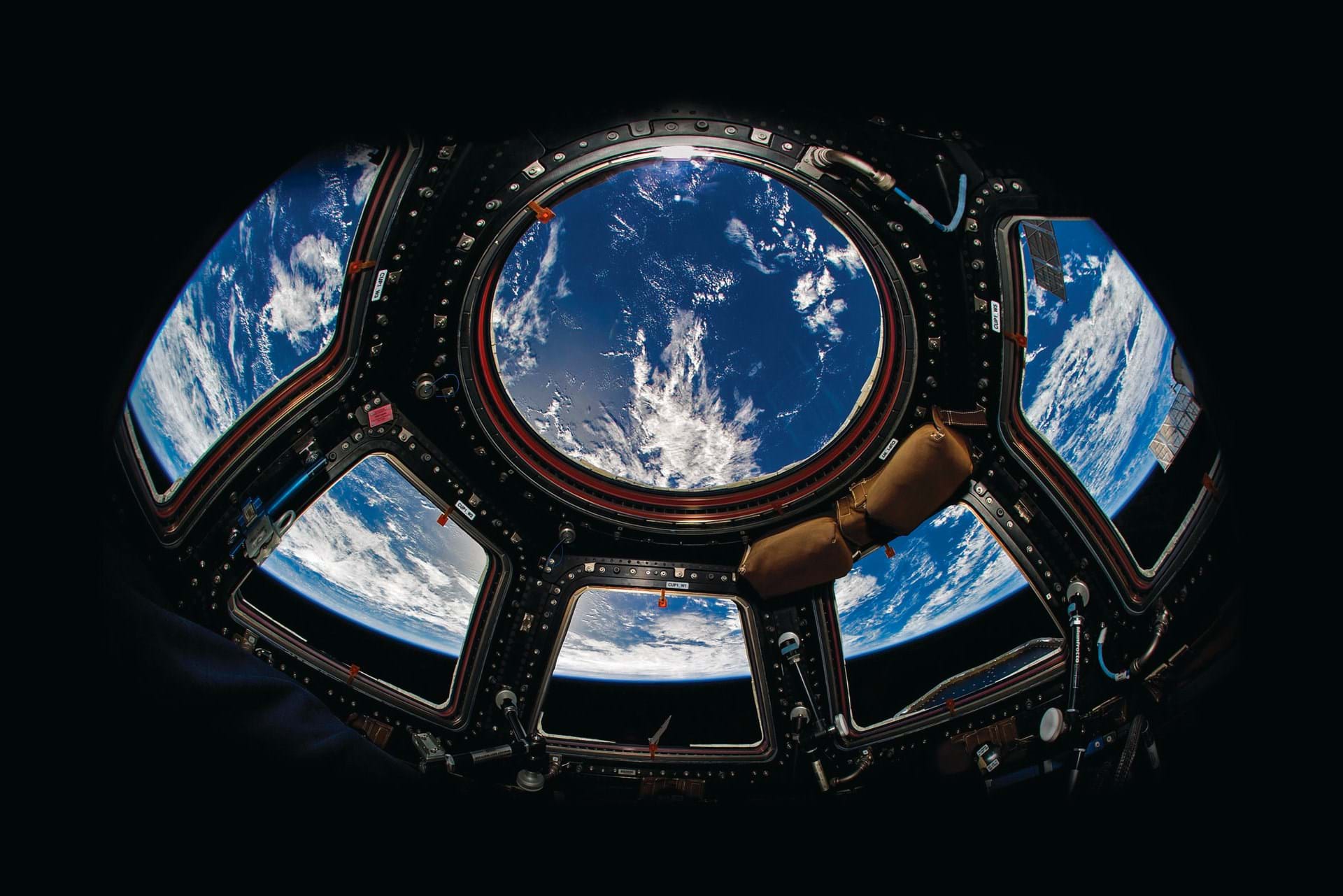 DONALD PETTIT sounds hoarse: “I have about half an hour,” he calls down the phone, his voice buffeted by the wind. “I need to get back in to the simulator.”

Pettit is speaking from outside the Johnson Space Centre in Houston – made famous by that fateful message from Apollo 13: “Houston, we’ve had a problem”.

“We have two mission control rooms,” he explains. One is used for actual ongoing space missions, while the other serves as a backup, or for training.

That is where Pettit has been working today, sitting at the capsule communication desk – or CAPCOM in NASA parlance – talking his colleagues through a simulated day in orbit dealing with all kinds of malfunctions.

“I’ve got some of my astronaut colleagues in the space station simulator and they are the ones having to grope with the fire, the depress’, the ammonia release, and all of these nasty things that we typically simulate.”

Pettit – a chemical engineer by qualification – knows what it is like to be in space and experience technical difficulties. In 2003, returning home from his first of three missions into space, a technical malfunction caused his Soyez TMA-1 spacecraft to abandon its controlled descent. The resulting harsh ballistic re-entry tore the antenna off the craft, subjected the crew to severe g-forces, and dropped them hundreds of miles away from the planned landing zone in Kazakhstan. It was several hours before the ground rescue crew found them.

But how did a chemical engineer find himself going into space in the first place?

“If you have any interest in human exploration, you put an application in and try to get in to the programme,” he says.

“I applied four times and interviewed four times over a 12-year period before I finally got in. The competition is fierce.” 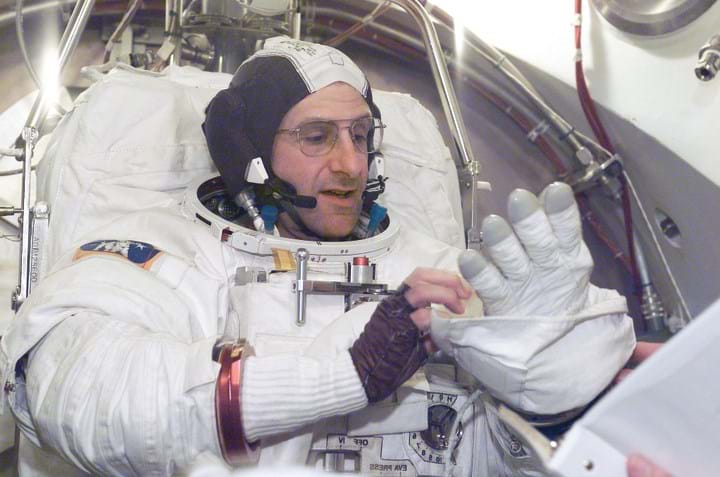 Donald Pettit has spent more than a year in space (NASA)

“Chemical engineering gives you a really good background and a really good set of tools in which to use…you can figure out where and how you want to apply those. Maybe you stay in the chemicals industry, maybe you go into non-standard industries that can utilise the toolbox that chemical engineers have – and space exploration happens to be one of those.”

Pettit was selected by NASA to join the programme in 1996, but explains he did not sell himself to the agency as wanting to carry out chemical engineering in space.

“One of the aspects of being an astronaut is you kind of walk away from your past experience and become a generalist.”

Applying to be a specialist on the programme is akin to talking yourself out of a job, Pettit says, though he notes that the chemical engineering mindset is suited to the technical challenges inherent in space travel.

Nothing more than unit operations

“A lot of these systems are one of a kind – serial number 001 – and they are designed by human beings on Earth for use in an environment that few people are familiar with so when they get in to space they often times have troubles. It helps to have someone understand the chemical engineering behind the systems to try to troubleshoot them to work the way you want.

“Just an example: we have this suite of equipment that starts off with the galley where you get all the water you need to make all of your food. The equipment that supplies the galley involves a whole bunch of ion exchange beds and charcoal beds for doing filtration. The unit that supplies that is actually a fractional distillation column but it’s a rotary fractional distillation column and it operates under a partial vacuum to lower the boiling point. It produces water that goes into the filter that goes into the galley. The unit that supplies the fractional distillation column is the toilet and so you have this whole suite of equipment that the engineers call the regenerative life support system. I like to call it the coffee machine because [it] has the uncanny ability to take yesterday’s coffee and turn it into today’s coffee.

“When the equipment was designed, they decided to recover 85% of the water from the urine, and you have this urine concentrate that looks like concentrated orange juice. What they found was that on orbit this rotary fractional distillation column was getting all gummed up with sludge, and this sludge never formed on Earth. So, why is our fractional distillation column getting all sludged up when through all of our testing for thousands of hours on Earth we didn’t have any problem at all? In two weeks of running this on orbit this column broke. We scratched our heads on this for a long time and finally figured out that crews on orbit don’t drink as much water as people on the ground. Our urine is more concentrated and so when we were running at 85% recovery we were getting past the saturation limit for many of these nasty organic and inorganic solids that can precipitate in urine and that were causing troubles in our column. So what we did was ultimately backed the recovery off to 75% and we haven’t had any [further] extraordinary issues with the column.” 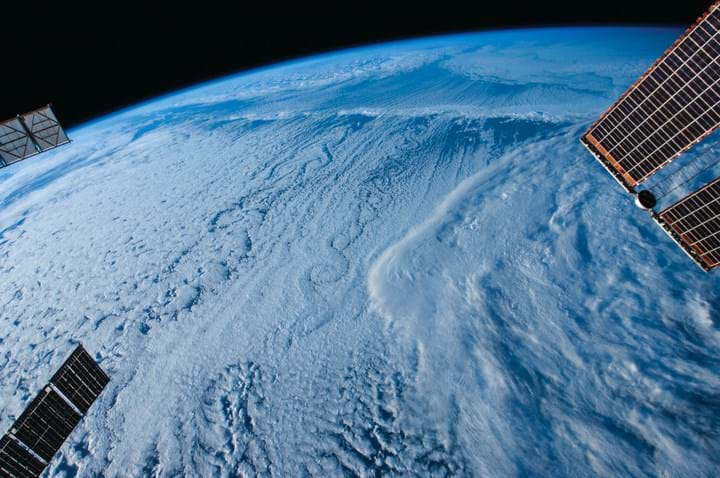 von Kármán streets: vortices often witnessed in wave tanks seen here at the length scale of half a continent

Then of course there is the research that cannot be studied on Earth because it requires microgravity.

One such discovery was that after a combustion experiment was shut down it continued to consume reactants and generate products at a reaction rate indicative of a higher temperature.

“People are postulating if you could get the enthalpy from your fuel but at these really low temperatures they might have benefits from [not generating] pollutants. You’re not going to be making NOs and NO2s.”

Then there are experiments with biological systems – ranging from work with bacteria and growing crops to the bodies of the astronauts themselves.

Pettit says going into orbit is an opportunity to test the complex system that is the human body and this might help us understand aspects of the human physiology that we had not considered before.

“One thing that we’re finding – and this is surprising – is that about 70% of everybody that spends long duration times on space stations comes back with eye retinal issues and no one understands why the retinas of your eye are starting to degenerate when they go into microgravity. That is just one intense field of study right now.” 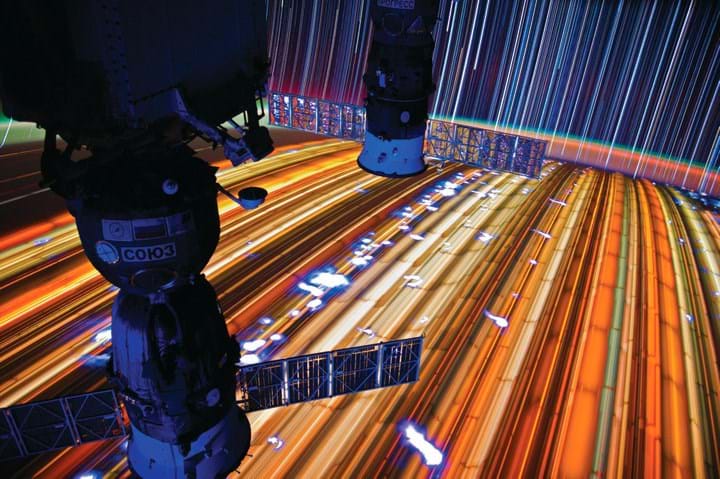 Astro-photography: Pettit's photos of the Earth from space have been published in a breathtaking collection called Spaceborne

In his off duty time, Pettit used the cameras on board the International Space Station to flex his artistic muscles. A selection of photographs he took during his 370 days in space have now been collected in a book called Spaceborne. These range from documentary-style images of the crew, their equipment and shots of the Earth to more artistic photographs of star trails created by stacking together long exposure shots.

“There are several levels of what you can see in my photographs. The first level is just art. You look at it and you go ‘Wow!’ You don’t need any other explanation. You could just take it in like you would a modern art painting. But at the same time [there is] the physics – the natural phenomenology in the star trails pictures in particular. I could talk for half an hour just about the physics of what you can see in that picture. It’s delightful to be able to see what is going on in nature and the [long] exposure records things that you don’t see in a short exposure.”

I ask Pettit if he can sum up what it feels like to go into space for those of us who have not had a chance to visit. “Oh gosh,” he says, and a long pause follows. It’s such a foreign event, he says, one that almost defies words.

“The colours are incredibly vivid, the night time views are amazing and beyond that you have to look at the photos and hope that some time the technology will allow anybody who wants to be able to venture into space [to go there].” 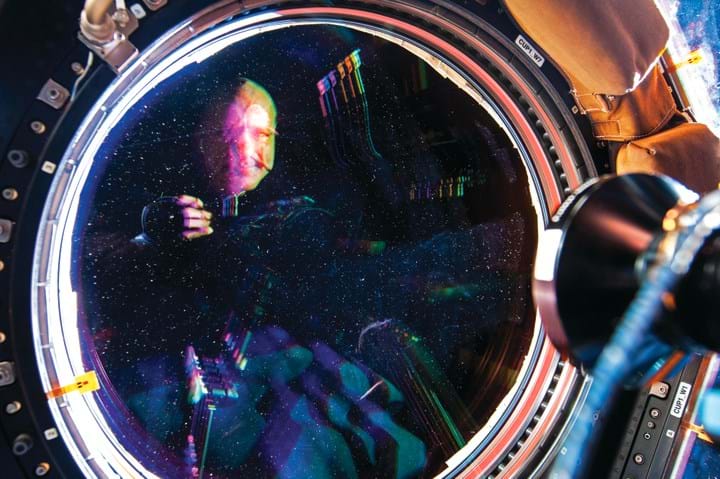 Space selfie: Pettit captures his reflection in a window aboard the ISS

Pettit returned from his third mission in 2012. He is now 62 but has no desire to hang up his spacesuit. And why should he? John Glenn, the first American to orbit the Earth, returned to space for the second time in 1998 aged 77.

“I’m still an active astronaut. I’m in the pool of astronauts where flight assignments come from and so I do my ground job, my penance on the ground.

“I really do hope to get another go at flying into space. I keep myself ready through all my training so that if and when I’m asked, I’ll be ready to go.”

In 2012, Pettit helped to dock a SpaceX Dragon supply ship with the International Space Station. Stepping foot inside the unmanned vehicle, he became the first person in history to enter a commercially-built and operated craft in space. As commercial interests now push the ambitions of manned space flight, with Space X CEO Elon Musk in particular aiming for Mars, I ask Pettit whether he’d venture as far as the Red Planet.

“Oh, I’d go as far as our technology allows us to.” 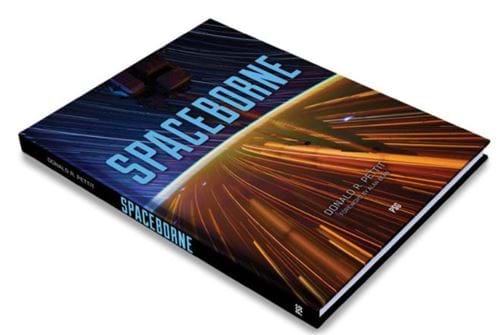 The photographs published in this article are reproduced with permission from publisher PSG. Spaceborne is available to buy at: https://bit.ly/2vS02kF

Answering the Call of Nature