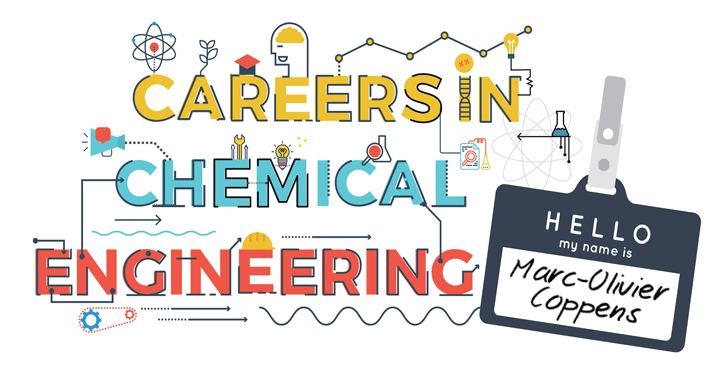 I’m a chemical engineer working in the energy sector. I was originally attracted to study chemical engineering because of the breadth of career opportunities it provides. To showcase this diversity, I will be talking to a range of chemical engineers to find out what they do, how they got there, and why they do it.

For this instalment, I spoke to Marc-Olivier Coppens, Ramsay Memorial Professor in Chemical Engineering, and Head of Department at UCL in London.

I first encountered Marc when he gave a talk at an engineering event a few years ago. He eloquently described the concept of "nature inspired chemical engineering" (NICE), an approach he developed at UCL and elsewhere over the past two decades, illustrated with creative examples of the possible applications.

The path to where he is today started with his teachers in Belgium, who nurtured his early interest in mathematics and chemistry. As a school student, he competed nationally and internationally in the mathematics and chemistry Olympiads. This talent, alongside a desire to translate science into application, led him to pursue a general engineering degree at Ghent University 30 years ago. The specific interest in chemistry, and the perception of a wide scope of discoveries to be made, led to chemical engineering.

After his final-year thesis ignited an interest in research, Marc went on to complete a PhD, funded by the Belgian National Science Foundation. But he wanted to explore other horizons. He wanted to build upon his work on applying fractal geometry to catalysis, so he wrote to Benoît Mandelbrot, the mathematician dubbed the "Father of Fractals". At the time, Mandelbrot was at Yale University and IBM in the US.

“My father is a classical concert pianist, and he was giving a concert in New York during Easter break,” explains Marc. While in New York for this event, he got in touch with Mandelbrot and got a prompt response.

“Mandelbrot said ‘come see me at home during the weekend as I’m very busy at IBM.’ I had the same type of feeling as someone meeting a Hollywood star.”

This led to a friendship and a mentorship, as well as work at the Mathematics department at Yale. What followed was a career in academic research, with posts at Berkeley, Delft, Rensselaer, and UCL.

“The environment at UCL allows collaboration across many disciplines. This gave birth to the Centre for Nature Inspired Engineering (CNIE),” says Marc.

The basic concept is to learn from nature, and the way nature has evolved solutions to problems, with trees being a good example.

“The size of the twigs is the same in an old and young tree but the number of branching levels changes with growth. What’s happening in the leaf is the same in a small and large tree. This is very different to how we usually scale up chemical reactors; we build something larger, with different stirrers, baffles, and so forth.”

These hierarchical transport networks, which can also be seen in the lungs and the brain, are not traditionally applied in chemical process engineering.

Some of these concepts have been turned into real applications. Patents have been filed for a fractal fluid injector, as well as for a dental bone graft substitute material, which emulates natural structures to improve transport in porous media. Closer to my own area of chemical engineering, the group has applied the way lungs distribute air to the distribution of oxygen and fuel in a fuel cell.

Redesigning the fuel cell, based on lungs

The lung has evolved to operate with minimal metabolic energy losses, to allow us to use energy for other activities like moving and thinking. Marc describes how the lung is optimally designed, from the trachea to the alveoli.

“With additive manufacturing, we print fuel cells that use those principles. We have re-designed the fuel cell. It is not in the marketplace, but there is industrial and entrepreneurial interest to develop this further.”

I don’t see these artificial bounds between engineering and humanities. To me, engineering is a humanity

Marc strongly believes that diversity spurs different ways of thinking, owing to his own experiences of living in new places and working with people from different backgrounds. This is reflected in his group, a diverse range of people in every sense of the word.

As the first engineer in his family, he maintains a strong interest in languages, arts, and many other hobbies.

“I think doing all these different activities feeds into who we are, how we think, it spurs creativity. I don’t see these artificial bounds between engineering and humanities. To me, engineering is a humanity. The creative spirit should be linked with the methodological approach.”