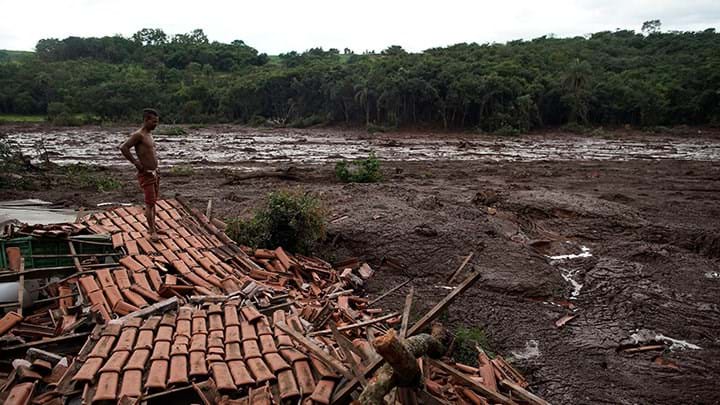 Leo Correa/AP/Shutterstock
Emerson dos Santos stands on the debris of his mother's house in Brumadinho, Brazil, following the collapse of a Vale tailings dam.

AN expert panel commissioned by Brazilian mining giant Vale has concluded that a number of factors, including a steep slope design and high water level, combined to create the conditions for failure that led to the fatal collapse of a Vale tailings dam last year.

In its report, the panel added that the failure was “unique” as it occurred with “no apparent signs of distress prior to failure”. It claims none of Vale’s monitoring systems detected significant deformations or changes. Previously, Brazil’s National Mining Agency (ANM) released a technical report which says that Vale withheld information from it which could have prevented the tragedy.

Tailings are the waste product of ore processing; a slurry of fine uneconomic rock and chemical effluent that is stored in tailings dams.

On 25 January 2019, a Vale tailings dam – Dam 1 (also known as B1) of Vale’s Córrego do Feijão mine, located near Brumadinho, Minas Gerais, Brazil – collapsed releasing a torrent of muddy slurry. The slurry buried the surrounding area, including the site’s administrative building and cafeteria, reaching as far as a local community. 259 people have been confirmed dead so far, including 136 contracted workers and members of the public. 11 people are still considered missing.

According to the panel’s report, Dam 1 failed by flow (static) liquefaction. Liquefaction is a process by which materials such as sand lose their strength and stiffness and behave more like a liquid. The material in Dam 1 showed sudden and significant strength loss and became a heavy liquid that flowed downstream at high speed. 9.7m m3 of material (about 75% of the tailings stored) flowed out of the dam in less than five minutes.

The report states that it was a combination of steep upstream construction, high water level, weak fine tailings within the dam, and the brittle nature of the tailings which created the conditions for the failure of Dam 1.

The material within the dam had the potential for the significant and rapid strength loss observed during the failure of Dam 1 as the tailings had a high ferrous content, which made the tailings heavy and enabled bonding between particles. The bonding made the tailings stiff, and potentially brittle. This stiff, brittle nature is consistent with the lack of observable deformations prior to the failure and the sudden and rapid response at failure, the report says.

The upstream method is a dam construction method in which the dam face is built in stages as tailings are added and their depth increases. The face of the dam is built from the coarser portion of the tailings themselves and is built over the finer slurries it is designed to impound.

Speaking to The Chemical Engineer last year, Stephen Edwards, Deputy Director of the University College London Hazards Centre said that “the upstream method is the worst… because of the potential likelihood of failure of that design.”

Edwards further commented that industry opts for upstream dams over more resilient centreline or downstream methods (see Figure 1) because it's “basically quicker to build and cheaper.”

In the upstream method, the sand tailings used to create the face of the dam (grey) overhang the finer slimes tailings (white) that they are designed to hold back (credit: http://doi.org/cz3s)

Further to its upstream construction, the initial design of Dam 1 established a relatively steep slope. Though the overall slope was later reduced by the construction of a setback, its construction also moved the upper portion of the slope over weaker fine tailings, contributing to instability. Appendix J of the panel’s report defines a setback as “the upstream relocation of the dam crest alignment”.

Water management also contributed to dam instability. There were times when ponded water – water impounded behind the dam – reached close to the crest of the dam, resulting in weak tailings being deposited near the crest of the dam and interbedded layers of fine and coarse tailings.

Since tailings deposition into Dam 1 ceased in July 2016 the water level had not reduced significantly. Design features in the starter dam impeded drainage through the toe of the dam – the point at which the surface of the dam meets the level of the surrounding ground. Additionally, no “significant” internal drainage was installed during the construction of later raisings, except small drainage blankets below some later raisings, and chimney drains in some of the upper raisings. “Raising” refers to increasing the height of a tailings dam through the construction of an additional dike.

The lack of significant drainage, along with the presence of less permeable layers of fine tailings within the dam, resulted in the high water level.

Further contributing to instability was a “high and intense regional wet season”, says the report. It states that the heavy rainfall likely resulted in a loss of suction, which then produced a loss of strength in the unsaturated materials above the water level.

As a result of these factors, Dam 1 was only “marginally stable”, with tailings under high shear stresses within the downstream slope. The high sheer stress resulted in small ongoing strains in the dam due to creep – the accumulation of strain under constant load. When the internal strains and the strength reduction caused by heavy rainfall reached critical level, Dam 1 collapsed.

Commissioned to identify the technical causes of the dam collapse, the expert panel did not assess matters relating to the corporate or personal responsibility for the failure.

Lindsay Newland Bowker, Founder and Executive Director of the database World Mine Tailings Failures commented: “Had this excellent panel had free rein to explain the cause of the failure at Brumadinho – which it didn’t – we would have had much more to work with that could help in loss prevention.”

“What they couldn’t address, by contract, is what we most needed to know: was known best practice in stability analysis, and more broadly TSF design and management, competently applied or even referenced during the life of facility; and, at the point when the vulnerability was finally recognized in 2016, was it too late to prevent failure (given that the smallest additional strain could have been a trigger at any time and the water level within the dam was not changing enough due to design flaws at inception)?.”

According to Bowker, in response to high phreatic surface water, Vale’s senior geotechnical engineer made the decision to cease tailings deposition and ordered an aggressive dewatering program to reduce water in the dam. The company had planned to mine iron within the dam itself, once the water levels were low enough.

“None of these methods detected any significant deformations or changes prior to failure,” the report says.

Though the report does acknowledge that deformation occurred in the year prior to the collapse, with some acceleration during the wet season, it adds that deformations were “consistent with slow, long-term settlement of the dam, likely the result of ongoing internal creep, and are not indicative of a precursor to failure”.

David Chambers, a geophysicist and President of the Center for Science in Public Participation (CSPP), explained that “with upstream construction there will be some settling in the dam itself because it is built on the tailings”. CSPP is a non-profit corporation that provides technical assistance on mining and water quality to public interest groups and tribal governments.

In November 2019, ANM announced the completion of a report which claimed that Vale either failed to report, or downplayed the severity of incidents, which would have triggered mechanisms to mitigate problems. ANM, which oversees Brazilian dams, primarily relies on the companies that own the dams to provide it with appropriate and clear information and works on a system based on responsive supervision. Issues reported to ANM can result in mitigation mechanisms such as deploying technicians to investigate and identify actions to reduce risk and prevent disasters.

It was previously reported that 13 people have been criminally charged by authorities alleging that they committed fraud; broke environmental crimes laws and used falsified documents. Seven of the 13 were Vale employees and the other six were employees of Vale’s contracted independent safety auditor Tüv Süd.

It was not stated whether the individuals were still employees of the relevant companies at the time the charges were brought.

The expert panel responsible for the technical report comprised four experts in geotechnical engineering with special expertise in water and tailings dams. They were assisted by various consultants. The panellists and consultants were retained by Vale’s external legal counsel, Skadden, Arps, Slate, Meagher & Flom.

Last month, Vale announced that it had completed emergency containment works announced in June. It has built a number of structures to reduce the flow of sediments in the Paraopeba river, located near Dam 1. Search efforts, tailings removal and handling, and environmental recovery of affected areas, are ongoing. On 18 December 2019, Vale said it had removed 1.3m m3 of tailings to date.

In 2015, a tailings dam co-owned by Vale and BHP – through their joint-venture Samarco – collapsed killing 19 people. Like the Dam 1 collapse the Samarco collapse also occurred by liquefaction. The collapse was triggered by design flaws.