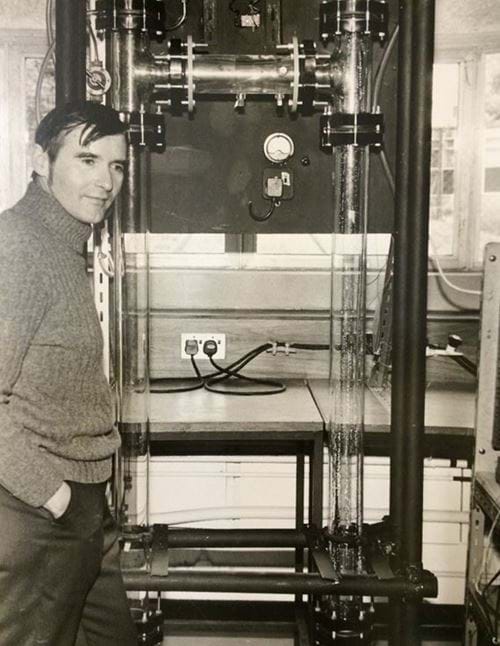 ACADEMIC, inventor, motor-cyclist and all-round Renaissance man, Norman was as comfortable in the worlds of literature, philosophy and music as within his chosen field of chemical engineering.

Son of a civil servant and a bluestocking intellectual who met at the Fabian Society, Norman was born in Lee-on-Sea, Essex in 1926. Despite a privileged upbringing and the cloistered life of an academic, he developed a voracious and enduring facility for talking to anyone from any walk of life -– his vast intellectual curiosity tempered by humility and empathy.

A scientific black sheep in a family that worshipped music, art and literature, Norman astonished his mother when he casually demonstrated, as a primary school pupil, a sophisticated understanding of hydraulics. In his youth, chemists’ shops were perfectly willing to provide a regular supply of concentrated sulphuric acid to a boy in short trousers, and Norman’s experiments were ceaseless, audacious and prodigious. He constructed a bacon-slicing machine out of Meccano long before he could read or write, and his appetite for crafting clever mechanical things never subsided.

His parents were bemused by his passion for engineering, but reluctantly allowed him to follow his interests at Battersea College. Lecturers there persuaded him to transfer to Imperial College, London, where he graduated in chemistry and subsequently completed a PhD.

From 1947 to 1949, Norman spent his National Service in the RAF, teaching trigonometry to pilots and navigators, and attaining the rank of Flying Officer, before moving to the University of Leicester.

In 1956 he sailed on the Queen Mary across the Atlantic, as a Harkness Fellow, to carry out post-doctoral research in organic chemistry at MIT  in Boston, US. There he met his soulmate and intellectual equal, Marion Fairman, a Harkness Fellow at Harvard Medical School. They both returned to academic positions in Scotland, married in 1959 and remained completely devoted to one another to the end of their lives.

Norman joined the department of chemical engineering at the University of Edinburgh as a lecturer, rising to head of the department. He tended to delve into everything in considerable depth and was impatient of those content with superficial understanding. His typical tutorial or examination question would postulate a “proposed device” for measuring something, and could generally be solved relatively easily if only the basic situation could be recognised, which wasn’t too easy under examination conditions!

This, combined with his perennially youthful appearance, caused the students to plunder Henry Wadsworth Longfellow in order to produce a rather longer nickname than usual:

“A youth who bore, ‘mid snow and ice
A banner with a strange device.”

Norman’s early research interest was in the measurement of local mass transfer coefficients: the local recession of an ablating surface (eg naphthalene in air) in a hydrodynamic model of the flow system. Over time, he replaced the volatile surfaces (always difficult to machine) by polymer surfaces that could be swollen using one of a range of solvents. This allowed repeated experiments on the same model, without having to fabricate another. A further advantage was that by using solvents of differing diffusivities in air a range of Schmidt numbers could be covered. Later, he introduced the use of laser holographic interferometry to replace air gauging, allowing simultaneous measurements of mass transfer coefficient at different points over the whole model surface.

Norman remained at Edinburgh University for the rest of his working life, but took advantage of several sabbaticals – at ICI Wilton in the early 60s; several summers at BNFL in Cumbia; at Rice University, Houston, Texas in the late sixties; and from 1979–1980 at Harvey Mudd College in Claremont, California.

At Edinburgh, Norman worked with the heart surgeon Desmond Julian on the development of artificial heart valves. His objective was to produce a valve that would have a long in-vivo life and reduce blood clotting, thereby eliminating the need for anticoagulant medication, and he achieved this with a valve that demonstrated low generation of turbulence that could be fabricated in a blood-inert material such as vitreous carbon.

This valve comprised a conical seat with a circular aerofoil-profiled valve rotating on an off-centre axis. With ‘forward’ flow, the valve would move to the low-drag open position by virtue of the lift forces generated by the aerofoil shape. When the flow reversed, forces generated by the off-centre pivot closed the valve closed tightly and rapidly. Turbulence was remarkably low at all points in the open-close cycle.

Testing was carried out using an artificial heart pump, also developed by Norman. Here, as almost always, his inventiveness was focussed on mechanical solutions. It was necessary to vary the ‘heart’ rate, the volume pumped per beat and the “attack” - the relative strength of the initial phase of the heart contraction. Where a modern researcher would use an electronic function generator and an electrical-mechanical transducer to produce this effect, he invented an off-centre swash-plate motor that compressed the pump membrane, reproducing all the required effects.

To avoid animal experimentation, warm rennetised milk was used instead of blood as a test fluid. This coagulated in much the same way as blood under the influence of turbulence, but on a much shorter time-scale.

It was difficult to find a manufacturer both able and willing to fabricate the valve components to the required tolerances in vitreous carbon, which shrinks in an unpredictable way during the manufacture. Eventually, the Edwards Corporation in Southern California expressed an interest in his work and bought the rights.

Unfortunately, its insistence on using digital machining technology, which was then too crude for the precision required, instead of the elegant analogue mechanical milling device Norman had designed, led, in part, to the failure of the project. A clash of generations ensued, with Norman representing all that was good about traditional engineering, and the project was abandoned.

Norman made frequent visits to New York to pursue his case against Edwards, but these were not all grim; some of his colleagues noted that these trips usually coincided with new productions at the Metropolitan Opera.

He was passionate about classical music and had an extraordinary ear, demonstrating an ability to identify any piece of Mozart, Schubert or Britten from just a few bars.

Despite his exceptional recall for music and poetry, Norman had a poor memory for names and faces. He had a special interrogation technique which allowed him to establish his relation to the ‘stranger’ he was speaking to. This made for entertaining conversations as his opening gambits included: “Tell me, what was your experience of the last war?”

Norman was very close to his maternal aunt, the writer Dame Rebecca West, and she would ring him any time night or day to discuss technical or musical details in her novels. In 1983, he was the principal beneficiary of her will. The bequest allowed Marion and Norman to buy a converted barn in Askham, Cumbria, with a large workshop, although he continued working at the University of Edinburgh until his retirement in 1993.

Norman was attracted to all things mechanical, but he had a special love of clocks. On one walk in the Borders, near Dryburgh Abbey, he espied what turned out to be the fusee of a beautiful Georgian repeater clock in a rubbish bin. Gripped with an intractable mission to find the rest, and ignoring the pained entreaties of his family, he obtained permission from the owner to rummage through any other bins on the property. Improbably, he found enough of the clock’s discarded pieces to feel confident in restoring it. To Marion’s horror, he even offered the elderly owner a large sum of money (which was declined) for the jumble of rubbish he had gathered. With typical alacrity and meticulousness, over several years, he successfully reassembled and restored this magnificent clock to full functionality, and it is still ticking today. Sunday was his day for winding the clocks, all 13 of them, all ticking noisily, all striking merrily, some on the quarter hour. His children learned to tune out the noise, but overnight visitors found it harder.

Both Norman and Marion drove motorbikes, and Norman wore his leathers on most outdoor expeditions, whether they involved motorbiking or not. This made him unusually capable of picking brambles from the thorny inner reaches of the bushes. He drove his BMW bike daily from the Edinburgh New Town to Kings Buildings and, at weekends, to the Scottish borders or Cumbria. He had a special salute for other bikers on the open road, raising his forearm at the elbow, holding his gauntleted hand upright for a few moments before solemnly lowering his hand to the clutch. Almost every biker saluted back, though few so elegantly.

Norman and Marion moved from Cumbria to Oxford in 2002, finding a central flat with a separate workshop. Norman published what was to be his last paper in Physics Essays in 2012. Faraday's disk revisited: Some new experiments concerning unipolar electromagnetic induction. Norman recreated experiments in his Oxford workshop, originally conducted by Michael Faraday before 1832, and confirmed the rather surprising conclusion that the magnetic field of a Faraday disc (a conductive disc attached coaxially to a cylindrical magnet) does not rotate with the disc.

Norman died on 1 July, 18 days after his beloved wife Marion. He is survived by his three children Graham, Fiona and Helen, two grandchildren, Andrew and Joseph, and his sister, Alison.