A CATALYST has been developed for synthesising ammonia that is around 100 times more efficient than previous catalysts.

Ammonia is used to produce nitrogen fertilisers, nitric acid, and nitrogen-containing chemicals. It also has the potential to be an energy carrier for hydrogen for use in hydrogen fuel cells.

The Haber-Bosch process is currently used for synthesising ammonia in industry, and it uses an iron-based catalyst which requires high temperatures (400–500oC) and high pressures (10–30 MPa). Ammonia therefore must be produced in large, dedicated factories and then transported to the required sites. However, there is a demand for on-site production so that ammonia can be synthesised as required.

Researchers at Tokyo Institute of Technology have developed a new catalyst that is highly efficient even at low temperatures. Calcium amide, Ca(NH2)2, increases the activity of Ru-based catalysts at low temperatures. This can be further enhanced by barium doping, followed by H2 pre-treatment. The process creates a nanometre layer of barium over the ruthenium nanoparticles, forming Ru-Ba core-shell structures. These structures become self-organised on the Ba-Ca(NH2)2 support. The barium layer over the ruthenium nanoparticles stops the hydrogen poisoning, thus increasing the efficiency of the Ru/Ba-Ca(NH2)2 catalyst.

The support material is also converted into a mesoporous structure which gives it a high surface area, and this also acts to increase the activity of the catalyst. The mesoporous structure is formed by the reaction of the Ru nanoparticles with calcium amide during the H2 pre-treatment. 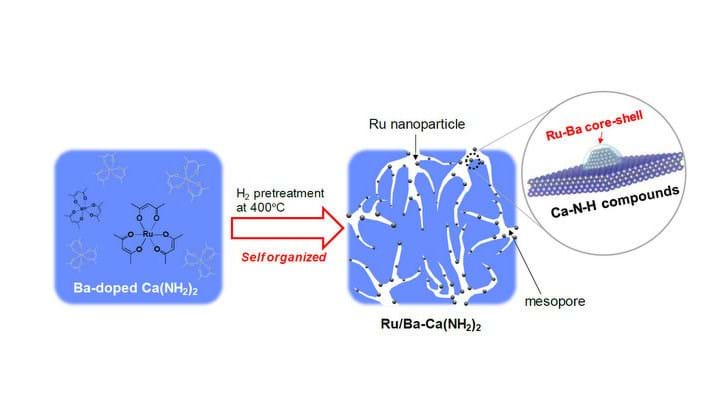 The new catalyst will reduce the amount of energy needed for ammonia synthesis and will likely lead to on-site production of ammonia.