Graphene as a carrier for fertiliser micronutrients

A GRAPHENE-BASED carrier system for delivering micronutrients to crops increases the efficiency of the fertiliser while reducing the environmental impact.

Crops require micronutrients for growth and development. In particular, zinc (Zn) is essential for maintaining healthy root systems, and copper (Cu) is important for the metabolism of plants. Micronutrients are usually fed to the crops through fertilisers that are water-soluble salts. In acidic sandy soils or high rainfall environments, these salts can be lost by leaching and run-off. This necessitates high dosages of fertilisers, which has severe environmental implications as well as a high cost. Therefore, the development of low-cost, slow-release fertilisers is essential to control the release of micronutrients.

Researchers at the University of Adelaide, Australia, have developed a method to use a graphene-based carrier to deliver micronutrients. Graphene oxide (GO) can be produced at a low cost, is water-dispersible, and has a high density of oxygen functional groups in the carbon lattice. The oxygen functional groups on the surface of sheets of GO make it possible for metal ions to bind to the surface and thus become loaded onto the carrier. The high surface area of graphene makes it ideal for loading nutrients onto the surface, and GO-based carriers already have widespread biomedical applications.

“Graphene is a novel new material only discovered in 2004 and has incredible properties, including a very high surface area, strength, and adaptability to bind to different nutrients,” said Dusan Losic, nanotechnology leader at the university’s school of chemical engineering. “We started exciting research on a broad range of applications of graphene four years ago – this is the first time graphene has been developed as a carrier for fertiliser nutrients.” 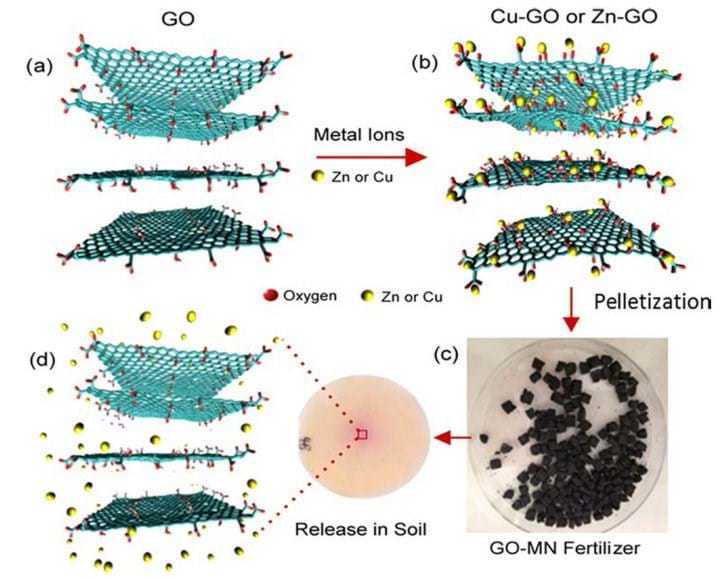 The difference in the release rate of nutrients between the GO and the salts is partially due to the strong attachment between the metal ions and the oxygen functional groups on the surface of the GO-based fertiliser, which results in a slow release of nutrients. This strong attachment also results in less Zn and Cu being lost to the soil and therefore more micronutrients are available for the plants.

Another factor contributing to the slow release is the low accessibility of the nutrients. When Zn or Cu is added to GO, the sheets of GO become wrinkled and rolled and trap the nutrients between the layers. Therefore, water molecules have to penetrate through interconnected channels in the stacked sheets, which slows the process down.

Tests performed on wheat showed that the Zn and Cu uptake was higher with the GO-based fertiliser than the conventional salt fertilisers.

“Fertilisers that show slower, more controlled release and greater efficiency will have reduced impact on the environment and lower costs for farmers over conventional fertilisers, bringing significant potential benefit for both agriculture and the environment,” said Mike McLaughlin, head of the University of Adelaide’s fertiliser technology research centre. “Our research found that loading copper and zinc micronutrients onto graphene oxide sheets was an effective way to supply micronutrients to plants. It also increased the strength of the fertiliser granules for better transport and spreading ability.”

The GO-based carriers have the potential to be used for any nutrient and could be used to create a new generation of advanced slow-release fertilisers.