RESEARCHERS at TU Wien, Austria, have discovered a novel, highly efficient, ‘green’ method of synthesising organic dyes, that are of great interest to organic electronics.

The method uses just water as a solvent, avoiding the use of conventional solvents and condensation promoters that are not only expensive, but also toxic, and harmful to the environment.

In recent years organic dyes found use in optoelectronic applications, such as organic solar cells and organic transistors, and in future, could be used in flat screens, electronic paper, and chip cards.

Their stability, electronic properties, and intense, radiant colours are why they are of such great interest to organic electronics.

They first chose to synthesise perinone from its starting compounds, naphthalene bisanhydride and o-phenylenediamene. Without need for condensation promoters or catalysts, they achieved a product with a high level of crystallinity.

The group then chose to synthesise indigo and pentacenetetrone, for which crystallinity also matters.

“In a highly crystalline state – at a high degree of order at the molecular level – the electronic properties of these materials improve. It is therefore particularly important for applications in organic electronics to have a high level of control over the crystallisation process,” stressed Unterlass.

Importantly, the dyes produced by this hydrothermal method had superior crystallinity to those produced by conventional methods.

Water as a solvent

The key to using water as solvent in this method is unusually high temperatures and pressure.

Conventionally, toxic, high-boiling solvents such as dimethyl formamide are needed to prepare or crystallise such dyes. In addition, non-nucleophilic bases, such as isoquinoline or Hünig’s base, may be used as condensation promoters. 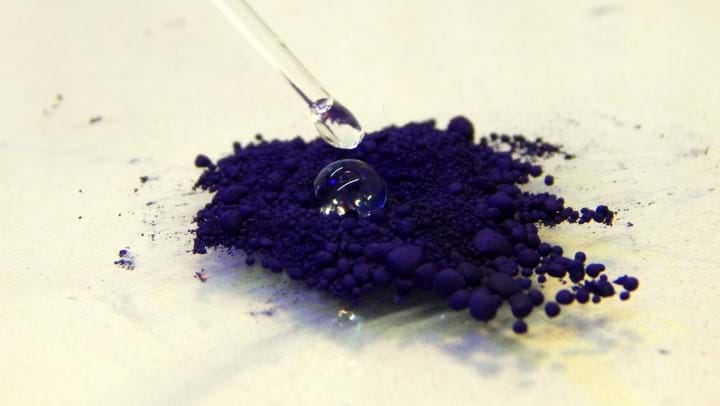 “In our case, though, pure water adopts the desired solvent properties – all you need is pressure and heat,” said Unterlass. “If you were to listen to your initial gut feeling, you would actually suspect that water is the worst solvent imaginable for synthesising and crystallising these molecules. The reason for this expectation is that the dyes we produce are extremely water-repellent.”

But this is only the case under room-temperature conditions. For the new method the team heated water to at least 180oC in special pressure valves, causing the pressure to increase drastically. Under these conditions a majority of the water remained liquid despite the high temperatures, and its chemical and physical properties changed.

“The properties of cold, liquid water are strongly influenced by hydrogen bonding,” Unterlass explained.  “These are weak bonds between water molecules that are constantly broken and reformed.”

The conditions also cause an increase in the amount of H3O+ and OH-, causing the water to be simultaneously acidic and basic, allowing it to behave as an acidic and basic catalyst. This increased number of ions is another reason why the method allows water to dissolve organic compounds that are insoluble under normal conditions.

Unterlass said that this method could be very useful in industry, and the dyes produced could have a variety of applications, particularly where the requirements for dyes are “rather demanding”, such as “car paint, or other areas where extreme chemical or thermal conditions prevail, as the materials also become more stable the more crystalline they are.”

The group is now looking for industry partners to help commercialise their method.