The visit took place on 12 June, coinciding with the Prime Minister’s announcement that the UK intends to have net zero emissions by 2050. The Prime Minister and Energy Minister were welcomed by Provost Ian Walmsley and Joanna Haigh. Haigh is former Co-Director of the Grantham Institute, Imperial’s hub for climate change and the environment, who last month led a group of climate change researchers urging May to adopt the Committee on Climate Change’s net zero recommendations. 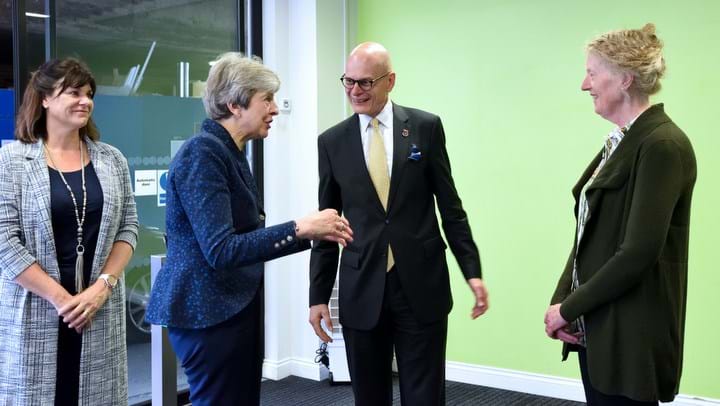 Colin Hale, Senior Teaching Fellow in Chemical Engineering, along with undergraduate and postgraduate students, showed the ministers around the pilot plant. It’s not every day that the Prime Minister visits a chemical engineering facility, but any nerves felt prior to the visit soon disappeared and the students were excited to showcase their work. “Despite our familiarity and extensive experiences towards visits in the pilot plant, my peers and I felt quite nervous prior to the Prime Minister's visit, as it was a visit like no other when considering how it was also coupled together with a truly historic announcement,” said undergraduate student Maiki Ueda. “However, upon meeting the Prime Minister, the nerves quickly disappeared. The Prime Minister's acknowledgement and pride of the innovations made by Imperial, and other British Institutions, allowed us to eagerly and confidently demonstrate our work.”

Hale described what the ministers were shown at the facility. “During the visit the PM and Energy Minister initially came to the carbon capture plant control room where we explained the basic carbon capture process and put into perspective the scale-up ratio between our facility and full-size processes. We demonstrated various aspects of the control room environment, including the importance of operator ergonomics, and highlighted some of the key information available to operators through an industrial control and instrumentation system. We brought up a piping and instrumentation diagram of the process and with some guidance the Prime Minister then found one of the instruments in the plant area using the integrated CCTV systems. This enabled us to highlight some of the skills that our students develop during their time on the plant and was further reinforced when we went into the plant area. This also enabled us to demonstrate the importance of hands-on application for chemical engineering students. We finally went to our undergraduate laboratory facilities to show how we can use smaller scale experiments to aid fundamental understanding of the many processes occurring in a bigger scale integrated process.” 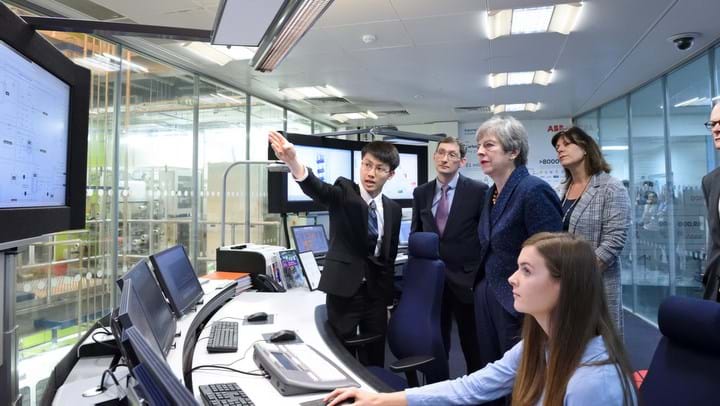 “The PM and the Energy Minister saw a laboratory scale setup to visualise flow patterns as they move through a constriction,” said PhD student Parth Shah. “Using ink as a tracer, they were able to see how flow turns from laminar to turbulent as the velocity increases, and how this principle forms the basis for some modern flow measurement techniques, as well as the importance of the trade-off between high flow velocities, pipeline sizes and energy costs.” 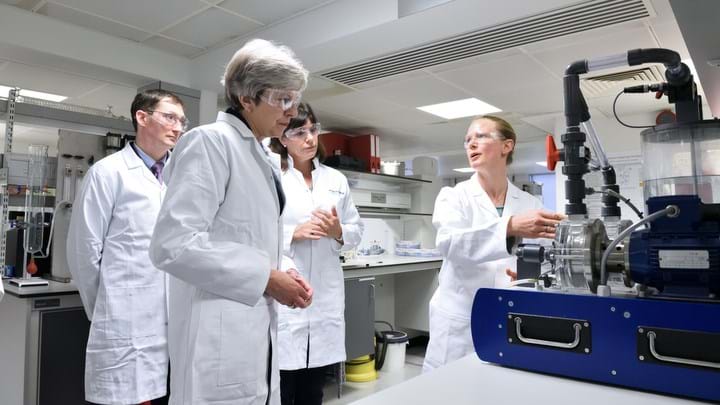 Recognising the importance of engineering

“The Prime Minister and the Energy Minister both seemed very engaged and invested in the goal to decarbonise,” said undergraduate Alexa Vasey. “It was also a good opportunity to showcase the role chemical engineers will play in the future and will hopefully inspire more people to join the field.”

“The PM and Energy Minister were both quite knowledgeable on the topic, perhaps owing to their geography background; carbon sequestration in particular, which relies heavily on a knowledge of rocks and aquifers,” said undergraduate Ferdinand Agu.

“Both Ministers engaged in the technical conversations deeply,” said Ueda. “They both held great pride and knowledge towards new innovations put forth by British Institutions, which has given us great motivation to make further strides in this crucial fight against carbon emissions.

“The importance of decarbonising was certainly recognised, with Minister Perry emphasising the need to utilise skills currently in the UK oil and gas industry, amongst others, to meet the 2050 net zero target,” said PhD student Janet Skitt. “As a member of IChemE, working in renewable transport fuels, I appreciated the acknowledgement of the significant part our industry has to play in reaching this.”

“The UK’s commitment to net zero carbon emissions by 2050 is indeed exemplary, and the sort of radical decision making required to curb global warming,” said Agu. “Carbon capture and storage is an imperative part of this and the PM was able to get a feel for the techniques, scalability and problems facing the technology. She was full of questions and seemed pleased with the answers she got, as such I'd consider the visit a success.”

“I believe this visit to the carbon capture plant, which directly links towards the innovations required for the future, greatly highlights the importance of engineering towards a greener future,” said Ueda. “The Prime Minister engaged deeply in our conversations, enabling the exchange of insights and knowledge, which has deeply ingrained a sense of responsibility and motivation for our future endeavours in the energy sector. It was an inspirational start towards the path to 2050.”

“Since the visit request came from the Cabinet Office directly it demonstrated that Government understands the critical role that chemical engineers will play in helping to deliver the ambitious aim of achieving zero net CO2 emissions by 2050,” said Hale. “It also provided us with an opportunity to demonstrate the importance of being able to provide people with the skills necessary to deliver these aims. Above all it allowed us to showcase the quality of our chemical engineering students.”

The Benefits of a PhD: An Academic's Perspective

Election Fever: Call for nominations for the Board of Trustees and Congress