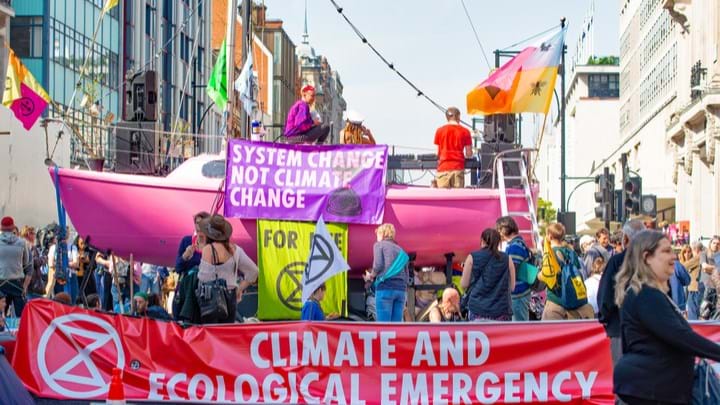 John Gomez / Shutterstock.com
Protesters brought areas of London to a standstill as they demanded meaningful action on climate change

THE UK’s Committee on Climate Change (CCC) has said the country could feasibly emit no emissions by 2050 if the government takes urgent action on the implementation of CCS and hydrogen for heating.

The independent committee, established to advise government on climate targets, said in a much-anticipated report published today that the government should adopt a target to emit zero emissions by 2050. This would cover all sectors of the economy, including international aviation and shipping, without using carbon credits.

“It is right that the UK takes a lead on this issue,” committee Chairman Lord Deben wrote in the preface to the report. “The UK is historically one of the historical contributors to climate change. And there is the prospect of real benefits to UK citizens: cleaner air, healthier diets, improved health and new economic opportunities from clean growth.”

The report follows parliament’s decision last night to declare a climate emergency, which itself came hot on the heels of the Extinction Rebellion protest that brought London to a standstill last month as thousands gathered to demand meaningful action on climate change.

In essence, the CCC report makes the same plea to government, noting that while the foundational policies are in place to implement the key technologies needed for a net-zero target they must be urgently strengthened and actioned because as they stand they are “insufficient for even the existing [climate] targets”.

“Our advice is offered on the proviso that net-zero is only credible if policies are introduced to match. The UK must make firm plans for housing and domestic heat; for industrial emissions; carbon capture and storage; road transport; agriculture; aviation and shipping,” Deben says.

“We must now increase our ambition to tackle climate change. The science demands it; the evidence is before you; we must start at once; there is no time to lose.”

The financial argument to extend the target is that the cost of key technologies are coming down, so achieving net-zero will cost the same 1–2% of GDP that government accepted when it adopted its current target to reduce emissions by 80% by 2050.

The report makes it clear that CCS is essential to achieving net zero emissions. There are 43 large-scale CCS projects operating or under development around the world but none are in the UK after the government cancelled two demonstration projects. The CCC says the government must increase its ambitions. This echoes calls last week from the select committee overseeing the Department for Business Energy and Industrial Strategy, which called on government to triple its target to have just one CCS cluster established by the mid-2020s. The CCC has now gone further, saying its scenarios for net-zero require capture and storage of 75–175m t of CO2 in 2050, which would require major transport and storage infrastructure servicing at least five clusters. At least one of the clusters should involve substantial production of hydrogen, it adds.

It further laments that there is “still no serious plan for decarbonising UK heating systems and no large-scale trials have begun for either heat pumps or hydrogen.”

Engineers have put forth plans for how the UK could decarbonise heat, with calls for funding to establish the world’s largest CO2 reduction project – the H21 North of England plan.

It says by 2050 the development of a hydrogen economy will be necessary to meet the demands of some industrial processes and to meet power and heating demands in peak periods. It says this new low-carbon industry will need production capacity comparable to the UK’s current fleet of gas-fired power stations.

While the CCC admits that reaching net-zero will require unprecedented changes to infrastructure investments, it points to other successful large-scale transitions including the natural gas switchover in the 1970s or the switch to digital broadcasting in the 2000s. It says the government, in partnership with National Infrastructure Commission, should urgently consider how shared infrastructure such as hydrogen production and CCS networks might be best identified, financed and delivered.

Alongside wider electrification of transport, more renewables power generation, changes to land use and eating less meat would help reduce emissions by as much as 96%, says the CCC. Tackling the rest would require the use of more speculative technologies such as direct capture of CO2.

CCC says the government must incentivise industry to reduce emissions without damaging competitiveness. This could involve direct government financing, procurement standards, or border tariffs to reflect the carbon content of imports.

Furthermore, it must look to tackle skills gaps that might slow progress, including support for designers, builders and installers of low carbon heating systems. It must also engage the public to explain why changes to their homes are needed, for example switching to hydrogen-fired boilers, and why they should support the switch.

Reacting to the report, the government said while it is “convinced of the urgency of action on climate change” it is not immediately accepting the recommendation but will respond in due course.

Stuart Haszeldine, Director of Scottish Carbon Capture & Storage (SCCS) and Professor of CCS at the University of Edinburgh said: “In its report, the CCC warns that we haven’t just overspent on our current account. We’ve also maxed out the credit card. The message about global warming has been wilfully ignored and we must now urgently start paying off the overdraft. That’s the bad news. The good news is that a smarter approach to carbon management will safeguard society and hundreds of thousands of high-value jobs in clean technologies, which the UK is just starting to build.”

Paul Davies, Chair of the CCUS Advisory Group established last month by the Department for Business, Energy and Industrial Strategy, said  “The CCC has identified that all options for achieving net-zero emissions in the UK require a significant role for CCS. They have understood that the deployment and development of appropriate business models is needed to bring in sustained significant investment from the private sector. This requires long-term policies and a stable commercial structure attractive to investors; precisely what the CCUS Advisory Group is designing with government.  This will give industry and government the ability to invest in CCUS at scale, realising the ambitions of the IPCC, BEIS Select Committee and the CCC. With these commercial structures in place; the time to invest is now.”

Rain Newton-Smith, Chief Economist at the CBI, said: “Recent protests have shown the strength of public passion and sense of urgency that the UK should do all it can to mitigate the worst impacts of climate change, on society, the economy and the environment. What we need now is a supportive and timely response from the UK government to enact this ambitious target, so businesses and the public can get on with reaching it.”

John Sauven, Executive Director of Greenpeace UK, said: "The Committee on Climate Change has clearly thrown down the gauntlet to the government over delivering increased ambition. The committee has spelt out that if we want to maintain our credibility and any leadership on climate then the government can no longer faff around with promises and half measures. It needs to have plausible, deliverable plans.