CO2 as a commodity, not waste: turning emissions into cost-competitive chemicals

Opus-12 is a clean technology company based in California, US, that has developed a process to convert CO2 emissions from industry into products such as ethylene, methane, and syngas. I spoke to Etosha Cave, Co-founder and Chief Science Officer of Opus 12, about the company’s aim to transform CO2 from a waste product to a valuable feedstock, and how their technology could one day be used to produce fuel and tools on Mars.

Growing up in Houston, Texas, at the heart of the petrochemical industry made Cave aware of the impact that energy has on the city and on civilisation. “I also was in a neighbourhood that was adjacent to an abandoned oil and gas waste site that had leached into the water supply and was linked to a higher rate of rare forms of cancer and other types of diseases,” said Cave. “Hearing about that as a teenager really gave me some motivation to want to do something about the way we get our energy and fuels; realising that they were super important, and at the same time that we should do something about the waste that they can generate.”

This inspired her to pursue a career in engineering as a way of tackling those challenges. During her PhD at Stanford University, Cave and fellow graduate student Kendra Kuhl were studying metal catalysts to understand how they could be used to convert CO2­ into useful products. Towards the end of Cave’s PhD in 2015, when Kuhl was doing a postdoc, they teamed up with Nicholas Flanders, then a graduate student at the university’s School of Business. Together they formed Opus 12 to work on how they could scale up the technology and make it industrially relevant. 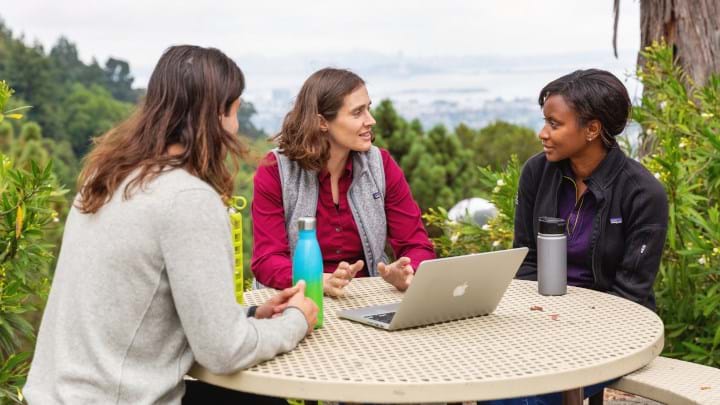 The Opus 12 process uses the electrochemical reduction of CO2, which uses water and electricity as inputs. “Our core technology is our flexible membrane electrode assembly, that goes into existing water electrolysers and repurposes them into CO2 electrolysers,” said Cave. “The analogy we use is that the Intel chip that’s in your laptop is built by Intel; Intel doesn’t make the laptop but the chip is the key component to making the laptop work. We’re kind of like the Intel inside these electrolysers.”

“In some ways it’s easier because we don’t have to build the entire reactor but in other ways there is still a lot of engineering that goes into these membranes. Just like Intel – they optimise and engineer their one chip – it still takes a lot of engineering and R&D to do that.”

A single cell of the Opus 12 technology. Credit: Opus 12

A second step – for example polymerisation of ethylene to make polyethylene, or Fischer Tropsch to make fuel – can then be used to create the end product.

“As we grow and scale up we would have customers be able to choose what molecule they want us to make and then there would also be a secondary process to make an array of products,” said Cave.

The electrolyser unit can be bolted on to any source of emissions. The company is currently operating a commercial scale unit around the size of a dishwasher within the lab, and is scaling up to a unit around the size of a shipping container. Cave gave an example where the shipping container size unit could be used at a chemical refinery where the CO2 from another location on the plant is piped in, and the carbon monoxide that is produced could then be fed back into an existing pipeline that already accepts carbon monoxide.

The process can convert CO2 from biogas into methane. Biogas is released at landfills, wastewater treatment plants, or agriculture and contains up to 50% CO2. Opus-12 is in a partnership with Southern California Gas (SoCalGas) and Pacific Gas and Electric Company (PG&E) to convert the CO2 from biogas into renewable natural gas in a single step. The technology will be tested at an existing biogas facility.

Cave said that one of the main challenges with the technology is to be cost competitive with the petrochemical industry. “When we think about making carbon monoxide or ethylene, we’re constantly comparing our cost and our performance drivers based on the cost of the petroleum equivalent – that’s who we’re competing directly with.” The biggest cost is electricity, so the company can be cost competitive when low-cost renewable electricity is available.

The CO2-to-ethylene process is being developed for NASA, with potential applications for human spaceflight as well as producing fuel and chemicals on a potential future Moon or Mars base. The Martian atmosphere is comprised of around 95% CO2 which would provide an ample source of CO2. Water ice has been discovered on Mars, and electricity could be provided with solar panels or a nuclear reactor, enabling the electrochemical CO2 process to take place.

“In the case of the Martian atmosphere or the Moon, you could take CO2 and make fuels. You can make methane directly, and methane is actually the rocket fuel of choice for SpaceX. We also can make ethylene which can be made into polymers so you could custom-make tools and Ikea furniture or whatever you want to be comfortable on your Martian colony or Moon colony!”

“For spaceflight with humans, you have to clear out the CO2. Long-term exposure to elevated partial pressure of CO2 can eventually be toxic even in the presence of sufficient oxygen. You might as well do something with it because you’ve paid for those atoms and molecules to get into space through the food that the astronauts ate, so you might as well recycle that CO2.”

While 3D-printing tools from polyethylene made from CO2 in the Martian atmosphere is still a long time away, back on Earth Opus 12 are looking to rapidly roll out their system at emissions-intensive facilities.

“Our next set of plans look at scaling up our system to that shipping container size and then deploying it in either, US, Canada, Europe, places where there’s a strong desire – either because of policy reasons or consumer interest and demand – to utilise CO2 emissions for the creation of products and to prevent the CO2 from getting into the atmosphere.”

Preventing CO2 emissions from entering the atmosphere is imperative to deal with the climate crisis, and changing waste emissions to a vital feedstock will provide a further incentive for industries to decarbonise.