CHEMICAL engineering at the University of Cape Town (UCT) celebrated its centenary in December 2020 – the first university in Africa to do so, and, by our records, second only to the University of Queensland across the Southern Hemisphere.

The Department showcased this occasion in a Covid-conscious celebration, allowing for a mix of live and virtual attendees. Close to 800 people dialled in from around the world. Invited speakers included representatives of the alumni diaspora down the years, as well as UCT’s executive leadership and industry and research collaborators. The event also launched the book 2020: A Century of Chemical Engineering at UCT (pictured). 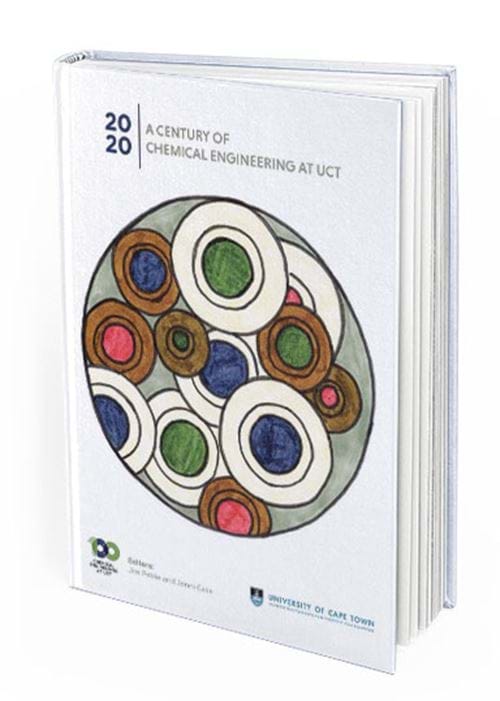 The monograph details the evolution of the programme; highlights key personalities who contributed their vision, energy and commitment to ensure that the programme succeeded and thrived; and showcases a range of personal vignettes from alumni, research colleagues and industry associates about their relationship with the department, its programmes and its people. At the same time, it attempts to develop an inclusive narrative which positions this story against the backdrop of South Africa’s evolving social history, including its industry base.

The text describes how a small but agile chemical engineering programme has matured into a world-class entity, continuing to leverage its expertise to make a meaningful contribution to solving the critical problems of 21st century living. We believe there are signals and lessons here for other similar-sized departments around the globe on how to capitalise on their knowledge and alumni base and links to society at large.

We are living with daily reminders that the world is increasingly more complex and uncertain. In the last 12 months alone, we have experienced a global health pandemic, gross economic strife and increasing levels of inequality, growing geo-political tensions and a continued assault on human rights, as well as continued poor stewardship of commodity chemicals, exemplified by the 2020 Beirut explosion of a significant stockpile of ammonium nitrate. These sit alongside the existential challenges of climate change, and the impacts of our consumption behaviour, including plastics pollution. And on the technology front, the pace of change is relentless, with innovation leading to the creation of disruptive technologies across many fields, including provision of energy and water, healthcare, communications, data analytics, and transport, all just in this last decade. What does any, or all, of this mean for the discipline of chemical engineering in South Africa, and for UCT particularly?

The University of Cape Town came into existence formally only in 1918 as South Africa’s first national teaching university, building on close to 50 years of offering post-matriculation courses through its progenitor, the South African College (SAC), which was licensed under colonial warrant from the UK. Close to 50% of its staff in the early 20th century came from the four traditional Scottish universities – St Andrews, Edinburgh, Glasgow and Aberdeen – embedding in the SAC a firm commitment to secular education.

Another, more speculative, benefit which flowed from the Scottish connection was linked to the evolving technology base of the burgeoning South African gold-mining industry, whose bounty had been recently unlocked with the Scottish patented McArthur-Forrest cyanidation process for gold recovery in 1888. The SAC contribution to the mining industry goes back to that same period, built originally around the theoretical coursework component of a course for mining candidate professionals, launched by the South African School of Mines.

There was considerable growth in commodity chemicals manufacture in South Africa from the turn of the century, and through the inter-war years. Much of this was underpinned by explosives manufacture to support growth in the gold and coal mining sectors. It was this appetite for local control of explosives production which provided the primary stimulus for the establishment of local chemical engineering programmes. In the years to follow, other synergies developed. A pyrites roaster was built for sulfuric acid production in the early 1930s, and coal-based ammonia plants were built, leading to the production of nitric acid and ammonium nitrate to replace nitroglycerin in explosives. Up to that point, glycerol had been imported. By the end of the second world war, the chemical industry had diversified additionally to produce calcium cyanide (for gold extraction), fertilisers, insecticides, paints, alcohols and their derivatives. It was that investment in coal conversion technologies which underpinned South Africa’s subsequent prominence in the production of synthetic liquid fuels from the 1950s.

A Greener Future for IChemE