… for Bob Gore, one giant leap for outdoor lovers. Claudia Flavell-While looks at the history of Gore-Tex

Innovation rarely follows a straightforward path. Often, innovations are the result of counterintuitive logic, and history is littered with examples of researchers finding unexpected side-effects that turn out to be vastly more interesting than the original research project (Viagra, anyone?).

So nobody should be surprised that attempts to create a polymer tape that plumbers could use to seal joints would lead to a revolution in outdoor apparel.

The product in question is expanded polytetrafluoroethylene, or ePTFE – known the world over as Gore-Tex.

Gore-Tex traces its birth to a family of chemical engineers in the US, Newark in Delaware to be exact. Its inventor, Robert ‘Bob’ Gore, was working for the family company W L Gore & Associates, set up by Bob Gore’s father Wilbert, better known as Bill.

Bill Gore was another chemical engineer who had spent 16 years working for DuPont during the day and tinkering in his basement in the evenings. His duties at DuPont brought him in contact with the company’s fluoropolymer research, an area Bill felt held opportunities that DuPont was missing. Specifically, Bill felt that PTFE, or Teflon as it’s known to non-chemists, had many more applications than DuPont was developing.

Most of the company’s early products centred around electrical insulation. PTFE has outstanding electrical properties and withstands extreme temperatures without becoming brittle. Bill Gore wanted to surround parallel electrical wires with PTFE but struggled with the process. It was his son Bob – at the time only a second-year chemical engineering undergraduate at the University of Delaware – who suggested a practical way of encapsulating the wires. The process worked and Bob’s parents went ahead and set up a company to commercialise the resulting applications – W L Gore & Associates was set up in 1958 in the basement of the family home, while Bob was credited as the inventor on the company’s first patent.

The resulting product, Multi-Tet cable, became a popular choice in the nascent computer industry, and was also found in a broad variety of communication and process control equipment. Within two years it had outgrown the Gores’ basement, so new office and manufacturing facilities were set up nearby. The cable even made it into space: some of the components used in Apollo 11 contained Multi-Tet cable, and thus became part of the historic 1969 Moon landing. 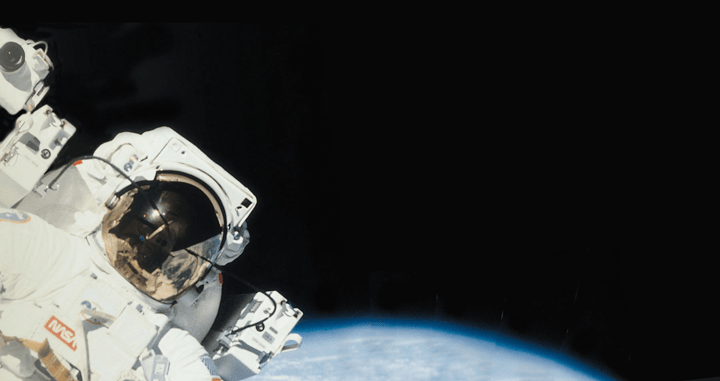 One application for Gore-tex is astronauts’ suits

However, it was already obvious that computers – which at the time would fill entire rooms – would only ever become smaller, so producing computer cables was, quite literally, a shrinking market. Bob Gore, who by 1969 had taken the title of technical and research leader in the family business, was busy looking for new markets and applications when he made an unexpected discovery.  He was attempting to stretch extruded ePTFE into something that plumbers could use as pipe-thread tape, using PTFE rods which he would heat up then slowly stretch. But the material refused to cooperate. No matter how Bob varied the temperature and the applied force, the rod would always snap.

“We were having really bad luck with that,” Gore told the American Institute of Chemical Engineers in an interview, “so I started to experiment with it at high temperatures. The more carefully I tried to stretch the material, the more easily it broke. That seemed counterintuitive to me. One evening I took a piece that had been treated at high temperature and gave it a fast yank, and was surprised to find that it stretched 1,000%, rather than the 10 to 20% we had been seeing.”

Whether Gore’s decision to give the rod a hard yank was the result of careful observation or, as others have suggested, born out of a moment of frustration, what matters is the result: microporous PTFE. The expanded material [has a honeycomb-like structure] and consists of around 70% air. Crucially, the pores are around 1/20,000th the size of a water droplet. The small pore size also makes the material windproof, even though the pores are still plenty big enough to allow the passage of air at a more gentle pace.

Further development work showed that a material that includes an ePTFE membrane would be waterproof and windproof yet breathable. Gore-Tex was born.

Early Gore-Tex fabrics were simple affairs, consisting of a strong outer-shell material (usually nylon or something similar) to which a Gore-Tex membrane was bonded. The first Gore-Tex raincoats hit the market in the late 1970s and, initially, mainly sold to sports people and outdoor enthusiasts.

However, the early days were not without teething problems: customers complained that their Gore-Tex fabric was leaking. Hurried tests found a problem that nobody had anticipated from the lab tests: human sweat contained oils that would rapidly clog the membranes. This alters the surface tension of the fabric, and lets moisture in – not what you need from a ‘waterproof’ material. A second problem was the seams: stitching ruined the waterproof micropores. Early users spent hours applying extra sealants to the seams but with limited success.

While it turned out that a good wash would solve the problem of the clogged-up pores, this was no good to someone who was out hiking and miles away from a washing machine. The solution, ultimately, was to add a protective inner lining that would prevent sweat from reaching the ePTFE layer – though this would come at the cost of some breathability. The seams are now factory treated so that they are no longer an inherent weak point. In addition, the other shell is chemically treated to make it water repellent – not for any waterproofing purpose, but because a wet top layer no longer lets any air through.

Once these problems were remedied, Gore-Tex became synonymous with outdoor clothing. Today the company has gone very much mainstream, and its products can be found in most wardrobes and walks of life.

ePTFE has a host of applications in the field of medicine

Contrary to popular belief, outdoor clothing isn’t all that ePTFE is good for. The material is biocompatible, as well as chemically inert, temperature resistant and extremely strong. This has given it a host of applications in the field of medicine, where it has been used for a broad range of implanted materials, from synthetic blood vessels to materials used in facial reconstruction, though its low wear resistance makes it unsuitable for demanding applications such as bone replacements.

Its porous structure, chemical inertness and heat resistance has given it another product line in the field of industrial filters, particularly in harsh environments such as foundries, chemical plants and waste incinerators.

Perhaps more unusually, ePTFE makes for very good dental floss. It was Bill Gore who, in 1971, decided to try flossing his teeth with some ePTFE tape. It took some 30 years for the company to start marketing the product properly – and even then it was to dentists rather than consumers – but the material’s strength and low friction give it an advantage over conventional polyethylene floss. Glide has now become the most popular choice of floss at dentists and the second most popular consumer floss in the US. While the brand and business was sold to Procter & Gamble in 2003, Gore continues to manufacture it.

There’s even an artistic side to this versatile material: when applied as a coating to metal guitar strings, ePTFE reduces friction (thereby increasing playing speed) and improves the durability of the strings; they’re known in the trade as Elixir strings.

While, like any company, W L Gore & Associates has changed immeasurably since its beginnings, one or two elements have stayed the same. Firstly, the company remains in private hands (ownership is split between the Gore family and its 9,000 employees). Secondly, the spirit of experimentation that started with Bill Gore is still very much in evidence, and employees are encouraged to experiment and produce prototypes.

Unusually, Gore has no standard hierarchical management structure but operates what it terms as a flat ‘lattice’ structure. Almost all employees share the same title: associate. They choose the leaders they wish to follow and are accountable to their fellow team members rather than their ‘boss’. The system has made Gore a popular company to work for, and it is rarely out of the top positions of ‘best ‘company to work for’ charts.

Bob Gore’s furious yank has not only given the family business an incredibly broad range of products and applications to serve, but brought him no shortage of public recognition. DuPont gave him a lifetime achievement award for fluoropolymers research, he received the Wintrhop-Sears Award of the Chemical heritage Foundation, the Perkin Medal of the Society for Chemical Industry, and in 2006 was inducted into the US National Inventors Hall of Fame.

Spencer Silver and Arthur Fry – In Search Of An Application