Short on sulfur: Is a potential resource crisis about to threaten food security and stifle green technology? 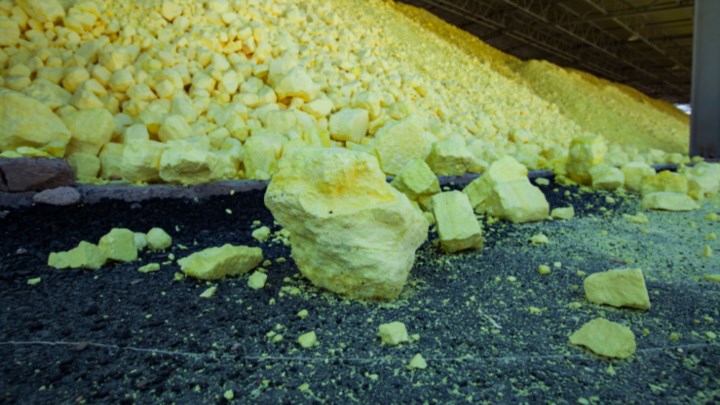 Sulfuric acid is a vital ingredient for many industries, but a new study by researchers at UCL suggests supplies could run short as the world seeks to decarbonise

A NEW study by researchers at UCL suggests that supplies of sulfuric acid, a vital manufacturing feedstock, could face a global shortage as industries turn to decarbonisation to fight climate change.

Despite being extremely corrosive and toxic, as well as carcinogenic, everything from phosphorus fertiliser, nylon, synthetic rubbers, drugs, aluminium production, nuclear fuel processing, to the extraction, processing, and refining of a range of metals all rely on the use of sulfuric acid. Over 246 m t of sulfuric acid are used annually, and this figure is set to rise as global agriculture intensifies and green technologies become more established.

Ironically, however, as the world looks to end its reliance on fossil fuels and become more sustainable, researchers at University College London (UCL) say industries are overlooking a potentially huge problem – a sulfuric acid shortage.

That’s because over 80% of the global sulfur supply comes from the desulfurisation of crude oil and natural gas that reduces the SO2 gas emissions. With a reduction in fossil fuels production, will come a reduction in sulfuric acid production and this could create a shortfall as large as 320 m t by 2040, or 130% of present-day production, the team at UCL said.

It’s a shortage that could have as many connotations as sulfuric acid’s uses, especially when it comes to low-carbon technologies, such as high-performance batteries, light-weight motors for vehicles, and solar panels, as they all rely on sulfuric acid in the manufacturing process.

Incidentally, this scenario could lead to a transition period “when green tech outbids the fertiliser industry for the limited more expensive sulfur supply, creating an issue with food production”, warn the researchers in their paper.

When extraction from fossil fuels is no longer viable, sulfuric acid supplies are likely to be topped up from mining instead, which by contrast, “will be dirty, toxic, destructive, and expensive”, said study lead author, Mark Maslin at UCL.

“Sulfur shortages have occurred before, but what makes this different is that the source of the element is shifting away from being a waste product of the fossil fuel industry”, Maslin said.

Claiming to be the first to identify this major issue, the researchers go on to say that the international community should consider supporting and regulating sulfur mining. This will minimise the impacts of the transition, and also “avoid cheap unethical production from distorting the market.”

There are abundant deposits of sulfate minerals in the Earth’s crust, the team said, but what we need now is research to develop low-cost, and low environmental impact methods to extract it as current processes consume a lot of energy and emit a lot of CO2.

Along with more sustainable mining methods, the researchers suggest ways to help mitigate against the problem, such as recycling. This includes sources from sewage and other waste; lithium batteries; and by using bacteria to recycle sulfur from salts produced in processes that use sulfuric acid.

Finding alternatives to sulfuric acid is another possibility. Replacing sulfuric acid with nitric acid could be an option, while inventing new more powerful batteries and motors that are less reliant on nickel, cobalt, and rare earth elements could reduce demand. However, the researchers acknowledge that changes to industrial processes to accommodate new procedures have to make financial and environmental sense.

Whatever the way forward is, by recognising the sulfur crisis now, “we can develop national and international policies to manage future sulfur demand, increase resource recycling, and develop alternative cheap supplies which have minimal environmental and social impact”, the researchers conclude.