AUSTRIAN technology company Krajete has announced the successful testing of a filtration system that adsorbs nitrogen oxides (NOx) from ambient air. The technology could allow captured NOx to be used for fertiliser production.

NOx are harmful exhaust gases, primarily produced by vehicles, that have significant economic potential and could be used for cost-effective production of mineral fertiliser. Catalytic converters can help to reduce NOx emissions from exhaust fumes but, according to Krajete, they do so to an insufficient level. Furthermore, converters release nitrogen – which could be used by agriculture – into the environment.

In the initial tests, Krajete’s system was installed in Heilbronn, Germany where it filtered ambient air continuously at a rate of 1,500 m3/h for more than a year. The local authority in the city is testing various options to avert the potential need for a vehicle ban on a key traffic route, to help reduce emissions. 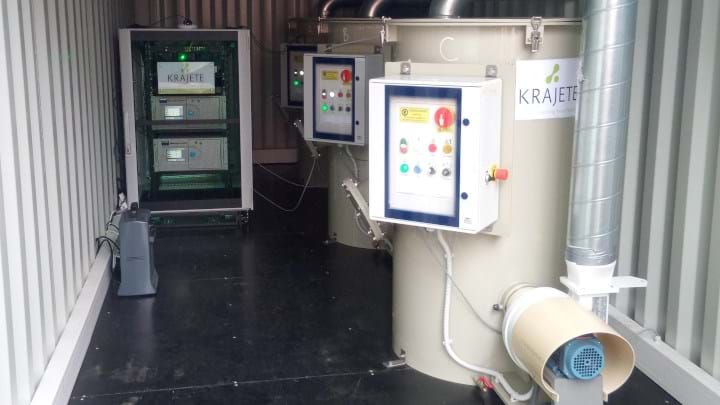 Alexander Krajete, Founder and CEO of the company explained that for capture, air is compressed through a cylindrical tubular gas-phase reactor setup. The overall system installed in Heilbronn employed three such devices, each with a ventilation rate of 500 m3/h. Capture is achieved using a naturally-occurring aluminium silicate which adsorbs NOx under certain conditions. The company did not elaborate on the conditions.

According to Alexander Krajete, the average concentration of NOx in the pre-filtered air was 60 mg/m3 and the minimum adsorption rate was 85%. In the time it was operating, the system captured several thousand milligrammes of NOx, though the company did not specify a figure.

The capture system did not require any maintenance or repairs whilst it was operating in Heilbronn, making it suitable for permanent deployment on major traffic routes where vehicle bans could be imposed.

Following the success of the 1,500 m3/h system, the company now intends install a 25,000 m3/h system in Heilbronn within the next couple of months. The findings achieved with the larger system will further contribute to development. Further testing will involve examining the potential uses of the bound nitrogen.

Noting the potential agricultural use, Alexander Krajete said: “Instead of producing nitrogen fertilisers from atmospheric nitrogen, which is a complex, energy-intensive, and expensive procedure, we could use a very cheap source which doubles up as a means of purifying the air.”

The company’s long-term aim is to install capture equipment in the exhausts of petrol and diesel vehicles, and is in talks with car manufacturers which are carrying out detailed analysis of the technology.