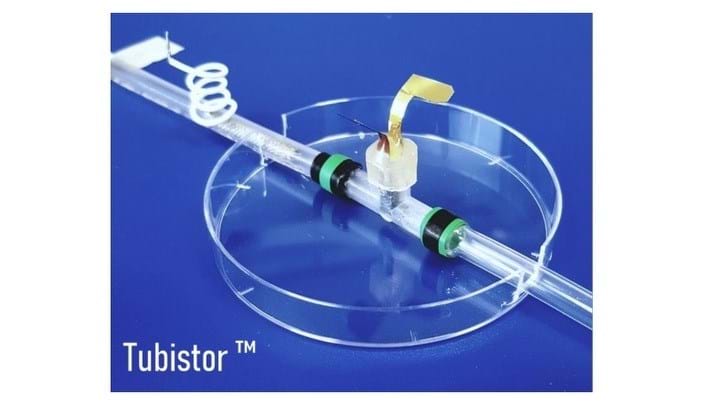 RESEARCHERS led by the University of Cambridge, UK have developed a three-dimensional (3D) ‘organ-on-a-chip’ which enables real-time continuous monitoring of cells. The device could allow scientists to develop new treatments for disease and reduce the use of animal models.

Traditionally, biological studies are carried out in petri dishes and the use of petri dishes has enabled medical advancements, for example the discovery of the polio vaccine. However, the growth of cells on flat surfaces is not representative of how cells grow in the body. 2D cell cultures can therefore lead to misleading information and drug trial failures.

Growing cells in 3D environments more accurately represents the growth of cells inside the body. The 3D organ-on-a-chip developed by the researchers consists of cells incorporated inside a 3D transistor made from a soft sponge-like material inspired by native tissue structure. Transistors are semiconductor devices which are used to amplify or switch electronic signals and electrical power.

The device allows scientists to monitor cell growth and adhesion, and unlike other organ-on-a-chip devices, it doesn’t have to be taken apart to monitor cell function. It enables real-time continuous monitoring and allows for longer-term experiments.

The device could be used to monitor tissue responses to external drugs or toxins, or the key mechanisms involved in diseases and potential treatments.

In future, the device could be used to generate multiple types of organs, for example liver-on-a-chip or heart-on-a-chip and eventually lead to the development of a ‘body-on-a-chip’. Body-on-a-chip could then be used to simulate how various treatments affect the body as a whole.

Researchers plan to use the developed device to create a ‘gut-on-a-chip’ and attach it to a ‘brain-on-a-chip’. This would allow them to study the relationship between gut microbiome and brain functions as part of the IMBIBE project funded by the European Research Council.

Charalampos Pitsalidis, a postdoctoral researcher in the department of chemical engineering at Cambridge,  is the study’s first author.

He said: “This work paves the way to more sophisticated organ-on-chip assays by using 3D bioinspired devices that can seamlessly interface the anisotropic biological tissue and allow monitoring and regulation of biological function.”

The researchers have filled a patent for the device in France.

3D cell and tissue cultures are an emerging field of biomedical research and advances in 3D cell culture materials and techniques have, and will, continue to allow for the development of organ and tissue models. But although sophisticated 3D tissues can be generated, technology which can accurately assess the functionality of these models in real-time has not been well-developed.

Róisín Owens, University of Cambridge
Diagram of the organ-on-a-chip device

The researchers created a novel device which enabled label-free, dynamic and in-situ measurements. The device is an organic electrochemical transistor (OECT) consisting of three main parts. OECTs are transistors in which the current of the drain electrode is controlled by the injection of ions from an electrolyte into a semiconductor channel.

The first main part of the OECT is a T-shaped tube with three openings. Two of the openings are for electrodes – one for source and drain and another for the gate electrode – and an opening to allow perfusion. Perfusion is the passage of fluid through the circulatory or lymphatic system to an organ or tissue. In experiments, cell culture media was used as the fluid.

The free flow of nutrients into the system is relevant to a variety of biological tissues, such as vascular, gastrointestinal, and kidney, and biological processes, such as blood flow.

The second main part of the OECT is the electrodes. The source and drain electrodes make contact with the channel, in this case the polymer scaffold, and the gate establishes electrical contact with an electrolyte injected to control the drain current.

The final main part is the scaffold. Researchers used the conductive polymer poly(3,4-ethylenedioxythiophene) polystyrene sulfonate, or PEDOT:PSS, as the scaffold.

The researchers used epithelial cells and fibroblast cells and found that the cells had excellent compatibility with the 3D conducting polymer. Whether seeded ex-situ or in-situ using continuous flow through the integrated fluidic the cells could grow readily and form tissues. And, said Pitsalidis, the devices could sense the formation (and disruption) of epithelial cells.

Furthermore, the researchers found that correlating real-time changes in the steady-state characteristics of the device with the growth of cultures tissue allowed them to gain insight into the transients of tissue formation.

The researchers also discovered that the conducting polymer exhibits stress-dependent electrical behaviour which could be used for several applications, such as electrostimulated drug release, piezoelectric sensors, or electrochemical stimulation.

“We intend to show some of these applications in a future work, where such devices can be used as pressure-sensing elements. Another exciting direction which could potentially leverage this property is cardiac tissue engineering (heart-beating cells),” Pitsalidis said.

“Animal experiments represent to date the gold standard in drug toxicology studies. However, the high failure rates of drugs in the preclinical stages, as well as the high cost of animal studies points to the need of more efficient alternative technologies for preclinical drug screening,” said Pitsalidis. “This work represents a significant step towards the realisation of more biomimetic in vitro cell-based models for drug screening including both drug efficacy and toxicology studies. This work proposes a technology that solves the two major challenges of current paradigms in in vitro cell-based models – the ability to grow cells in 3D and replicate their natural behaviour; and their integration with a bio-transducer for the label-free continuous assessment of their health status.”

“I believe that in the near future, such in-vitro platforms, will be routinely used for drug efficacy studies ie, by using the right disease models. The electronic readout of those devices will serve as an excellent tool to extract pharmacokinetics and other crucial information currently measured using time consuming and bulky techniques (ie, mass spec etc). As such we envision that pharmacology studies will become more automated and predictive, accelerating the drug discovery processes.”