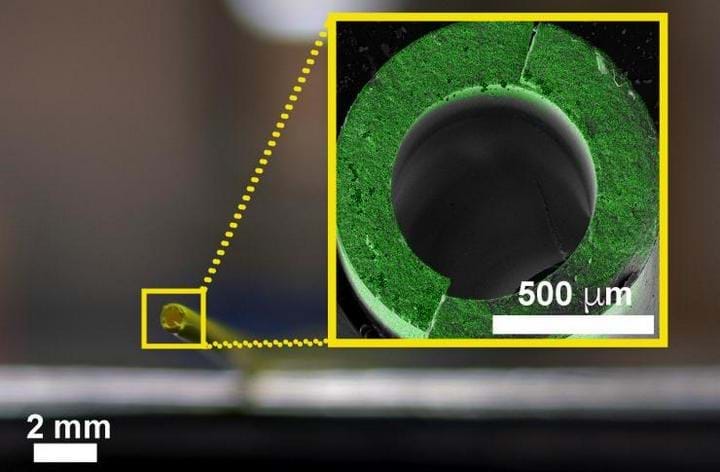 A cross-section of the membrane. The green dots show the locations of the metal oxide. Credit: Fengyi Zhang / Georgia Tech

Separating and refining feedstocks is necessary to produce products such as gasoline, plastics, and food. Conventional methods for chemical separation, such as distillation, use a significant amount of energy, but researchers at the Georgia Institute of Technology have developed a membrane capable of low-energy separation.

"The vast majority of separations out in the field in a variety of industries are thermally-driven systems such as distillation, and because of that we spend an inordinate amount of energy on these separation processes – something like 10–15% of the global energy budget is spent on chemical separations," said Ryan Lively, an Associate Professor in Georgia Tech's School of Chemical and  Biomolecular Engineering. "Separations that avoid the use of heat and a chemical phase-change are much less energy intense. In practice, using them could produce a 90% reduction in energy cost."

The researchers created a process that infuses a polymer-based membrane with a metal oxide network. They used a polymer of intrinsic microporosity, known as PIM-1, which is a rigid polymer with high levels of microporosity. This was combined with a metal oxide via vapour phase infiltration (VPI) to produce a hybrid membrane. VPI is a process that loads the bulk of polymers with inorganics. It has the advantage over conventional methods such as cross-linking or pyrolysis in that it doesn’t change the microstructure of the polymer. It also doesn’t require the solvents needed by cross-linking or the high temperatures needed by pyrolysis.

Infusing the PIM-1 with a metal oxide improves the stability while maintaining the structure of the polymer. This prevents it from degrading compared to traditional membranes and means it can withstand solvents. This is the first time that VPI has been used to improve membrane stability in harsh chemical environments.

The hybrid polymer/metal oxide membrane can separate solutes from solvents, but can also separate solvents from other solvents without a phase change. "Some chemicals that need to be separated are very similar in terms of their size, shape and other properties, which makes them even harder to process using membranes," said Lively. "These new hybrid membranes are much more selective. They can separate chemicals that are more similar to each other."

The membranes were tested using harsh chemicals such as tetrahydrofuran, dichloromethane and chloroform, and remained stable for three months during the testing phase. The membranes could also separate aromatic molecules that only differed in size by 0.2 nm. The process can also be easily scaled up.

"One of the most exciting things about this work was how straightforward this process is from a manufacturing perspective," said Mark Losego, an Assistant Professor in the School of Materials Science and Engineering. "We're essentially taking pre-made membranes and applying a treatment to them. That's something that would be very simple to translate to an industrial scale."

Future work will improve on the membranes to fine tune the oxide infusions and make new types of membranes that can separate a wide variety of chemicals.