A LAB-ON-A-CHIP that can allow droplets to ‘surf’ across oil using acoustic waves has been developed to avoid cross-contamination of biological samples.

There is a wide variety of liquid handling systems used in biomedical research and the pharmaceuticals industry, such as robotic pipetting systems for automated fluid processing. However these systems are bulky and aren’t capable of handling small volumes of liquid very well.

Lab-on-a-chip systems can be used for processing small volumes of liquid, but as these chips rely on having physical contact with solid surfaces to contain or manipulate liquids, traces of a reagent can adsorb onto the surface of the chip. When the chip is next used, these traces can dissolve into another liquid sample, causing cross-contamination. To avoid cross-contamination, chips are often limited to performing a single type of reaction, especially for liquids with ‘sticky’ biomolecules such as undiluted blood. In addition, the channel designs in a chip are usually fixed, which prevents them from being reconfigured for other reactions.

“There are a lot of protein-laden fluids and certain reagents that tend to stick to the chips that are handling them,” explained Tony Jun Huang, a professor of mechanical engineering and materials science at Duke University in North Carolina. “This is especially true of biological samples.”

Huang and his team have developed a reusable and programmable biomedical chip that uses a thin layer of inert, immiscible oil to isolate droplets from the surface and prevent them leaving behind any traces. Below the oil is a series of piezoelectric transducers that vibrate when electricity is passed through them, creating sound waves in the layer of oil. By controlling the sound waves, the researchers can create vertical vortexes that form dimples in the oil which hold the droplets. As different transducers are activated, the changing sound waves can pass the droplets along the surface of the oil, which can be used to mix droplets together or to split them apart. The technique is known as digital acoustofluidics. 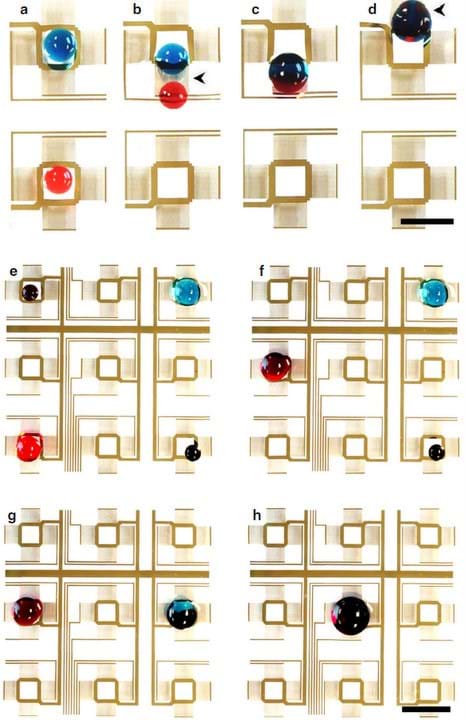 The same fluidic path can be used repeatedly without the risk of cross-contamination, making the chip rewritable. “Our contactless liquid-handling mechanism inherently eliminates cross-contamination associated with surface adsorption and the need for surface modification,” said Huang. “It enables reusable paths for the droplets to be dynamically processed on arbitrary routes without cross-talk between each other, exponentially increasing the allowable number of combinations of reagent inputs on the same device.”

Enzymes can be easily contaminated, and any traces adsorbed on the surface could lead to unpredictable results in a reaction. As a proof of concept, the team demonstrated the ability of the new lab-on-a-chip using a reaction with enzymes. The enzyme neuron-specific enolase is typically released from damaged neurons and has been suggested as a biomarker for brain injuries such as stroke and concussion. There is usually only a short window of three to four hours for effective treatment after the onset of brain damage, so identifying injuries quickly is important.

Traditionally, a one-step reaction is used which produces luminescence if enolase is present, but at low concentrations this method requires 40 to 60 minutes to reveal luminescence. Using a cascade reaction with digital acoustofluidics, the detection limit is increased and enolase can be detected via luminescence after 15 minutes, which significantly shortens the diagnosis time for stroke patients.