RESEARCHERS at Germany’s Fraunhofer Institute for Electronic Nanosystems (ENAS) have developed mobile sensor spheres that can be used to more accurately monitor and optimise bioreactors in operation.

The bioorganisms in bioreactors require certain conditions to grow. The better the conditions, the greater the yield of the desired product. However, conditions such as temperature vary within a single reactor. Up to now, it has only been possible to test the temperature using probes inserted into parts of a bioreactor, which does not give an accurate overall impression. Research engineer Tobias Lüke and the team, which included researchers from Technical University Dresden and industry, developed mobile, pea-sized sensors which can measure temperature throughout the reactor, allowing for more accurate heat regulation.

“Sens-o-Spheres” have a rechargeable battery and float freely inside the reactor without disturbing the medium. They contain miniaturised radio transmitters, which send the date back live to base station. Each sphere is uniquely identified with its own ID. Lüke says that the Sens-o-Spheres can be used in many different types of reactors, from kilometre-long tube reactors to classic small cultivation vessels, such as shake flasks. 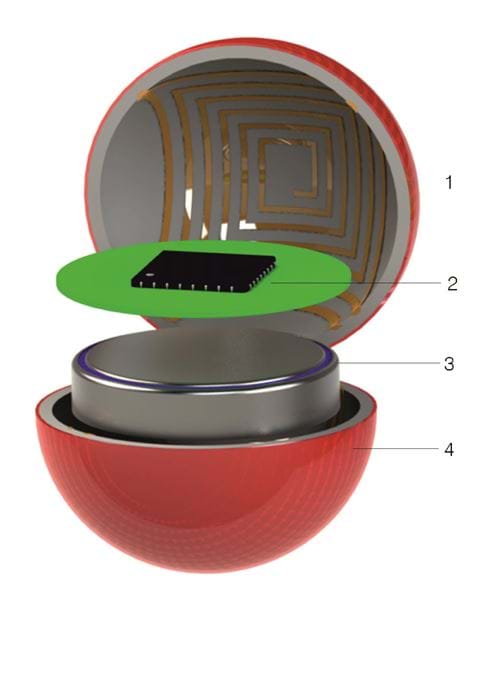 “At one litre the temperature differences within a reactor are not that great. However, with several thousand litres, the degree of error increases considerably. With our precise measurement technology, there are fewer problems in upscaling the volumes, which means switching from small test reactors in the laboratory to large ones in the production hall,” said Lüke.

Because of their hard polystyrene cases, which are resistant to temperatures of up to 120oC, and hardwearing electronics, Lüke says that Sens-o-Spheres can be sterilised in a normal autoclave and reused time and again.

Eventually, it is hoped to add other sensing capabilities to Sens-o-Spheres, including oxygen content and pH values. Lüke also says that the team hope to connect the base station directly to process system to allowed it to be automatically controlled.