A NEW form of graphene aerogel, inspired by the structure of a plant stem, is exceptionally strong and resilient, and could be used in flexible electronics.

Its creators, led by chemical engineer Tao Xie at Zhejiang University, China, say this is the first time both strength and flexibility have been simultaneously realised in an aerogel. It has previously been very difficult as graphene aerogel fabrication techniques, including 3D printing and chemical vapour deposition, typically result in aerogels with random porous structures. However, strength and resilience requires a regular pore architecture. Tao and the team were inspired by an aquatic plant called Thalia dealbata, which is extremely strong, and resilient enough to spring back from the strong winds in its habitat. Its stem is made up of lamellar layers interconnected by bridges. 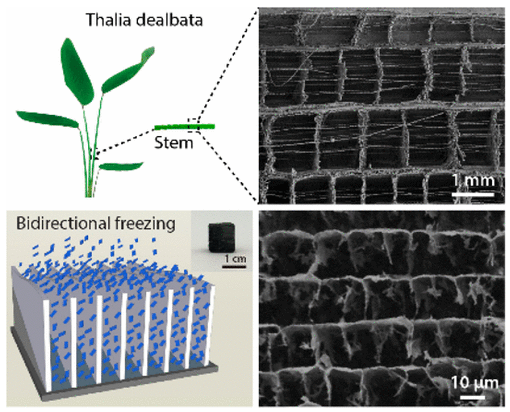 The stem of Thalia dealbata is made up of lamellar layers interconnected by bridges, which the team recreated in graphene

The team sought to mimic the ordered, interconnected layers in graphene. The aerogel they created is conductive and could spring back to its original size after being compressed by more than 6,000 times its weight at 50% strain. Its resilience was proven by the fact that even after more than 1,000 compressive cycles at 50% strain, the aerogel retained 85% of its compressive strength. An aerogel of similar density with a random pore architecture retained only 45% of its compressive strength after just ten compressive cycles.

The researchers used a bidirectional freezing technique to make the aerogel. The process relies on an ice crystal template. A precursor suspension of polyvinyl alcohol and graphene oxide is then introduced, before it is freeze dried, removing the water through sublimation. The structure is then thermally reduced to leave only the graphene aerogel structure.

The graphene aerogel, as well as being strong and resilient, is electrically conductive, with the conductivity changing depending on the level of compression. The higher the compressive strain, the greater the conductivity. The researchers say this property is desirable for use in sensors and in flexible electronics, and the durability of their structured aerogel makes it especially suitable for these purposes.

“Our study establishes bidirectional freezing as a general method to achieve multiscale architectural control in a scalable manner that can be extended to many other material systems,” the researchers concluded.