“LET'S start in the most sensible place: the future,” said summit moderator David Rowan, Founding Editor of Wired Magazine, at his introduction to the Engineering in an unpredictable world summit on 17 September. There was a strong focus throughout the summit on the importance of encouraging the next generation, and the summit began with that generation addressing the audience. Gitanjali Rao, a 13-year old inventor, spoke of her journey through innovation, describing innovation as the process of building, failing, and learning. She spoke of several of her inventions, including a device to test for levels of lead in drinking water which is faster than conventional technologies. “Our world is facing problems that have never been faced before. It is getting increasingly difficult to address them in the normal, traditional ways that we did in the past. Innovation is needed now more than ever.” She stressed the importance of mentorship, and encouraged the audience to seek a mentee and mentor them in the areas they are passionate about, adding that mentorship had been life-changing for her.

Rao was followed by Adrian Vincent Opinion, known as Ryan, a student at the Ateneo de Manila University in the Philippines and winner of the Trust for Sustainable Living Essay Competition. He began by asking the audience what comes to mind when they think of the word “prosperity”. “I’m sure the main reason we’re all here today is to ensure the continued prosperity of humanity and society. According to the Cambridge Dictionary, prosperity is the state of being successful and having a lot of money. Even our dictionaries define prosperity according to materialistic terms. But what if I told you that a materialistic view of prosperity is actually not sustainable?”

He continued by outlining that engineers have a key role to play in sustainability, particularly by addressing environmental degradation through creating a circular economy, and addressing non-inclusive development, where poorer communities are evicted to make way for large developments.

Around 300 students were among the delegates, including five teams each from the UK, US, and China who had been working on projects in the months beforehand. This included a team from North Carolina State University, US, which developed an affordable wastewater treatment process for coffee producers with byproducts of purified water and fertiliser. The various teams, along with other students, were then put into new, multi-disciplinary, multi-cultural groups for the Collaboration Lab, where they had a few days to develop a new innovative idea. The four finalist teams then presented their ideas and business models to the summit. 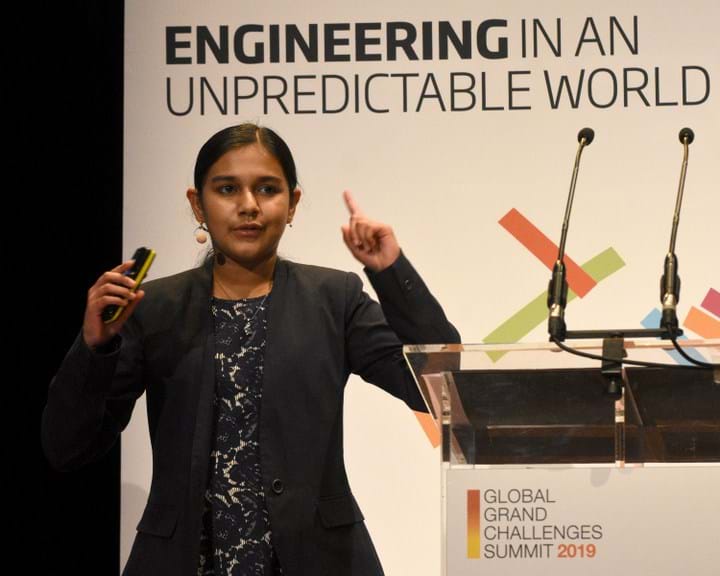 Despite being held in London, this summit, inspired by the 14 Grand Challenges for Engineering, was global, both through the attendees hailing from Asia, Africa and the US, as well as through satellite events being held in other countries.

“I strongly believe that if we are really to have an impact on global challenges, the best way to make this happen is a truly global conversation,” said Dame Ann Dowling, President of the Royal Academy of Engineering. “We’re going beyond engineering – bringing in speakers from the humanities and social sciences, from politics, business and civil society – to explore how we can better collaborate to meet our shared challenges. And that’s why we’re putting the next generation of engineers at the heart of our discussion. Because it’s these engineers whose life mission will be to solve those challenges.”

The challenges discussed at the summit included artificial intelligence, improving healthcare, dealing with a future population of ten billion people, and the climate crisis. A session about improving lives through engineering featured finalists from the Africa Prize for Engineering Innovation, including Chelmis Thiong’o, Co-Founder of Sign-IO, a company that has developed gloves that translate sign language into text and audio in real time.

The challenge of the climate crisis

One of the challenges of the climate crisis is that it’s not always seen as a crisis, as evidenced by the session title Increasing resilience: How can engineering reduce the risks of climate change? and speaker Jianyun Zhang, President of the Nanjing Hydraulic Research Institute, who took time to explain that climate change is not a hoax.

The session included a discussion on energy resilience in emerging economies, including a talk from Hannah Olmberg-Soesman, COO and Co-Founder of Guguplex Technologies, on bringing off-grid solar power to rural African communities. Klaus Lackner, Director at the Center for Negative Carbon Emissions, at Arizona State University, commented that renewable energy is much cheaper compared to other clean energy such as nuclear power, which makes it easier to deliver to both rich and poor communities. “Energy for a lot of people in the world is already unaffordable so any change that we can make is helping in that regard,” said Amrit Chandan, Co-founder & CEO of Aceleron, a company that makes serviceable lithium-ion batteries that are used for home storage in the Caribbean and East Africa.

The session was followed by a panel discussion on CCS, where Lackner said that direct air capture is possible at scale if we learn from the rollout of photovoltaic solar panels. “Once you have the drive, things can happen very fast. I am arguing that this can get even faster if you don’t go into huge upscaling because that’s very hard to do. I propose that we should number up. This is effectively what happened with photovoltaics, because we haven’t figured out how to make a square mile single panel, so we have to make lots of small ones. I think air capture can do that as well.”

Nilay Shah, Director of the Centre for Process Systems Engineering at Imperial College London, answered a question from the audience on how we can overcome the lack of societal acceptance of CCS, as it is often seen as existing solely to prop up the fossil fuel industry. “One of things that we do wrong in the public debate is that we talk about individual technologies and it’s very easy for people to form opinions about individual technologies, like offshore wind, nuclear power and so on. We need to start talking in terms of systems and say that for the UK to meets it obligations, here are three or four ‘flavours’ of energy and industrial systems that will actually technically work. That’s a positive conversation to have with people rather than ‘you like this and I don’t’.”

What grand challenge do you want to solve?

Overall, the summit generated a lot of discussion across different disciplines and cultures, with people from the audience often asking speakers as to how they could offer support or how they could collaborate. For example, audience member Barrett Caldwell, Professor of Industrial Engineering at the US’ Perdue University, wondered if his students, who have a lot of project-based learning with industry, could instead work on community-based problems and therefore be a resource for the next generation of entrepreneurs.

In a sponsor’s speech from Caroline Fricke Mantoura, Director at Accenture, the importance of the next generation of engineers was also highlighted. She commented that students graduating today have studied subjects that didn’t exist when she was a student, such as advanced sustainable development technology, AI, and machine learning.

Stories to read while we are away