Can oil-eating microbes clean up spills in the Arctic?

MICROBES that use oil as a food source offer the only way to degrade oil after a spill, however a review by researchers at Aarhus University, Denmark, has shown that biodegradation can be inhibited in cold waters.

Microbes are known to help clean up oil spills in warmer waters, but less is known about the “self-cleaning” capabilities of Arctic ecosystems. The risk of marine oil spills in the Arctic will increase with retreating sea ice, as shorter shipping routes are identified, and opportunities arise for oil exploitation. The Exxon Valdez spill in Alaska in 1989 highlighted the difficulties inherent in cleaning up an oil spill in a harsh environment. This makes understanding the role of microbes in clearing oil spills crucial for ecological risk assessment as well as for developing contingency plans.

Only 15–25% of marine oil spills can be removed with mechanical methods. Oil will naturally degrade over time with the assistance of certain bacteria, but this is highly dependent on the local conditions. The review has identified these conditions in the Arctic. "We are now presenting a first assessment of the microbial degradation potential in seawaters off Greenland," said Leendert Vergeynst from the Arctic research centre at Aarhus University.

Certain microbes use hydrocarbons as a source of energy and can thus break down oil into water and carbon dioxide. Biodegradation is the only process that will break down oil. However before the bacteria can feed on the oil, it needs to be in small droplets to make it “bioavailable”. This can be done by various weathering processes which change the chemical and physical properties of the oil.

One of the fastest weathering processes that can diminish oil slicks is evaporation of volatile hydrocarbons. Spreading of the spill also changes the oil properties as it will increase the area of the spill but decrease the thickness of the layer. Oil can be dispersed into smaller droplets through wave action or mixing of the water column, and water-soluble hydrocarbons will be dissolved. Water-in-oil emulsions can also form and these resist evaporation and dispersion.

Oil weathering in the Arctic

The most obvious factor that influences the Arctic is the cold temperature. This will change the chemical properties of the oil and slow down biodegradation. As cold oil is more viscous, it will spread out more and won’t easily disperse into droplets. Certain types of oils with a high wax content can solidify, which further inhibits dispersion. The low temperature will also reduce evaporation of volatile hydrocarbons.

Sea ice inhibits evaporation, and the lack of motion due to reduced wave activity will slow the breakup of the oil. If oil becomes trapped within ice it can be exposed to brine pockets. High salinity reduces the water solubility of most hydrocarbons so that when the melt season occurs, highly unweathered oil is released on the surface.

Oil-eating microbes need nutrients such as nitrogen and phosphorous, however these are less abundant in the water around Greenland. In addition, there are large blooms of phytoplankton in the spring and summer which could compete with bacteria for these nutrients, although the level of competition is still unclear.

“Marine oil snow” was observed during the Deepwater Horizon spill in 2010, when oil droplets stuck to particulates and sank to the seafloor where biodegradation is much slower. In the Arctic waters, this phenomenon is more likely due to the phytoplankton blooms and the mineral particles released by glaciers as they melt. Oil-phytoplankton or oil-mineral aggregates can form, which prevents the droplets from recoalescing and therefore makes them more bioavailable. However, if the sediment-to-oil ratio becomes too high, the aggregates sink to the sea bed, and as the concentration of particles is much higher in the Arctic than the Gulf of Mexico, there would be higher levels of “snow”. 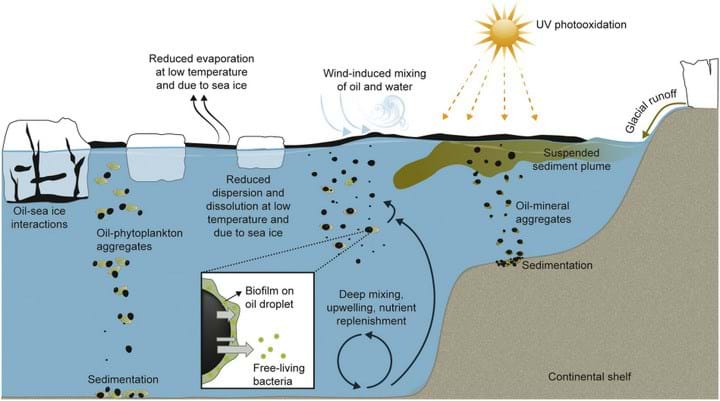 The Arctic-specific conditions that can inhibit biodegradation. Credit: Science of The Total Environment

Oil can leak into the environment through natural seepage, which has prompted bacteria in proximity to these seeps to adapt. Thus, prior exposure to oil is essential before microbes can assist with cleaning up oil spills. There are also many different types of oil-eating microbes that target different components of oil, and no single species can clear an oil spill.

The Gulf of Mexico has a high rate of oil seepage which has caused the local microbes to adapt, but the rate of seepage is one to two orders of magnitude lower in the pristine waters of the Arctic. Identifying sources of hydrocarbons, and thus communities of oil-eating bacteria, was highlighted in the review as an urgent future research priority. The review concludes that biodegradation conditions in the Arctic are suboptimal, but that further research is needed to fully understand how the area can cope with oil spills.

Science of The Total Environment http://doi.org/ckvm