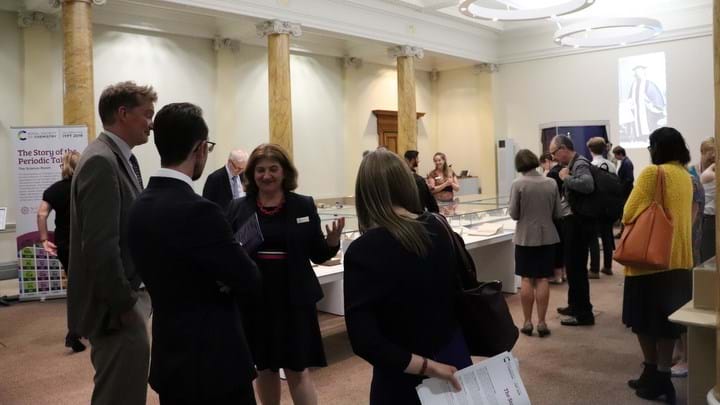 ON Tuesday the Royal Society of Chemistry (RSC) opened a special exhibition, curated by the University of Cambridge’s Peter Wothers, to celebrate the 150th anniversary of Mendeleev’s first periodic table of the elements.

The periodic table is a global and well-recognised symbol of science, said Dame Carol Robinson, President of the RSC. Not only is it iconic, it is a vital tool used in science education and by scientists throughout their careers.

With pieces on loan from Cambridge’s St Catharine’s College and Peter Wothers, Teaching Fellow in the Chemistry Department at the university, the celebratory exhibition features some “rare and one-of-a-kind” pieces which date back as far as 1557, demonstrating the “long and rich history of ordering the chemical elements”.

Among the exhibits is the oldest known periodic table wallchart, on loan from the University of St Andrews, UK where it was discovered in 2014. Containing just 65 of the 118 elements now identified, the table has been dated back to 1885.

In addition to historic artefacts, the exhibit also features interesting visual representations of the periodic table, including a unique example designed by the European Chemical Society. Containing just the “90 natural elements that make up everything”, the table is colour coded to demonstrate the risk of supply loss. Additionally, elements occupy space equivalent to their earthly and atmospheric abundance, on a logarithmic scale. Phone symbols indicate elements used in most smartphones, helping to drive home the need for a more circular economy in the market and the need to identify alternatives for use.

Another featured visual representation is a sterling silver periodic spiral sculpture, based on a 1920 design. (Image provided by the Royal Society of Chemistry.) Like in the conventional periodic table, elements of the same group are aligned vertically, with the exception of helium which is placed between Group 2 and Group 18 to reflect the misalignment between its structure and its behaviour.

Additionally, the exhibit features a macramé periodic table containing more than 200,000 knots. (Image provided by the Royal Society of Chemistry.)

The RSC's exhibition will be open at Burlington House, London, UK until 30 August.

The United Nations Educational, Scientific and Cultural Organization has designated this year as the International Year of the Periodic Table, to mark the 150th anniversary of the publishing of Mendeleev’s first periodic table.