A TECHNIQUE has been developed that allows two fluids to be combined mid-air by using two jets of material. This can be used to encapsulate living cells for potential use in tissue engineering.

Lab-on-a-chip microfluidics uses tiny fluidic channels that limit the speed at which droplets can leave the chip. The typical speed is in the microlitre per minute range, so that filling a cubic centimetre would take around 17 hours. Researchers at the Netherlands’ University of Twente have developed a new method, called in-air microfluidics, that combines micrometre-sized streams of liquids mid-air to fill a cubic centimetre volume within a matter of minutes.

The jets can be made of different types of fluid that react chemically or physically, so that the collision between them can create new materials. The material can then solidify to build a 3D structure.

Two nozzles are used to create the flow of liquids. A droplet train can be ejected from the first nozzle and will combine with a continuous stream from the second nozzle, known as “drop-jet” mode. Alternatively, both nozzles can create jets, known as “jet-jet” mode, and this can be used to create fibres. 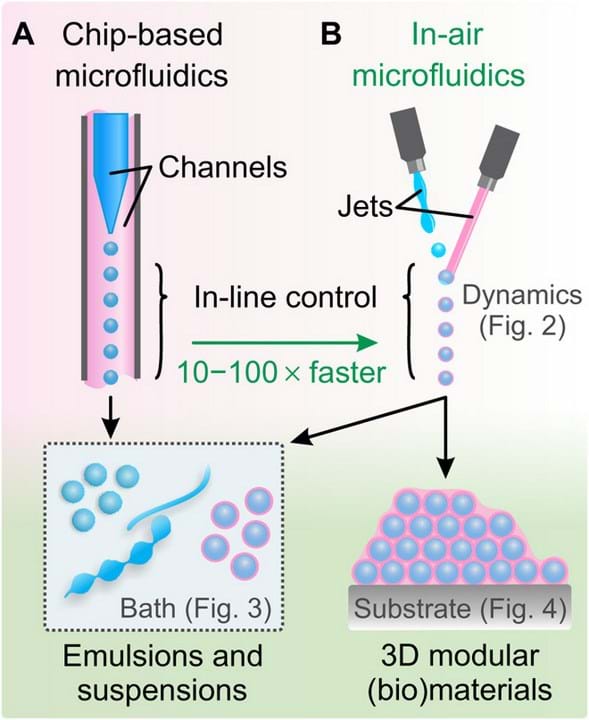 Comparison between chip-based microfluidics and in-air microfluidics. Droplets from the first jet can be encapsulated by fluid from the second jet. The shells then solidify to create a 3D structure. Credit: University of Twente / Science Advances

The shell around the droplet can solidify in the air so that the encapsulated droplets can then be stacked to create a 3D structure. The droplets will stick together without any air bubbles between them.

The researchers used the droplets with the solidified shells to create a hollow cylinder by depositing the droplets on to a rotating surface. The modular freeform can have different functions by changing the composition of the fluids, for example the structure could be a liquid-filled foam or a multimaterial solid.

The in-air technique can also be used to fill a mould if the droplets solidify mid-air, but the shells don’t solidify until the mould has been filled. The team used this method to fill a bone-shaped mould with human mesenchymal stem cells (MSCs) encapsulated with alginate.

In the top panel (A-D), a hollow cylinder can be constructed from a liquid-filled foam or a multimaterial solid. The shells solidify in the air so that the encapsulated droplets can be stacked to create the cylinder. The bottom panel (E-H) shows a bone-shaped mould being filled with a cell-laden biomaterial. In this case, the core of the droplet solidifies in the air but the shell doesn't solidify until it is in the mould, allowing the mould to be filled seamlessly. Image I shows an injection-moulded multiscale modular tissue. Credit: University of Twente / Science Advances

By creating multicellular and multimaterial 3D structures, this type of modular biomaterial has the potential to be used in tissue engineering. There is also a hand-held setup of the nozzles which could benefit tissue engineers and surgeons for fabricating biological tissue.