Midgley is described as the man who “had more impact on the atmosphere than any other single organism in Earth’s history.” (Image of the ozone hole by NASA Earth Observatory)

From fuel hero to climate zero: Claudia Flavell-While on the turbulent life of Thomas Midgley 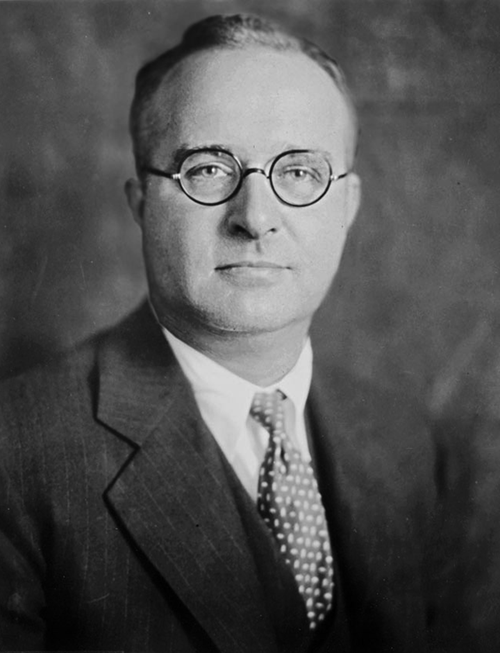 The line, from James Russell Lowell’s poem Present Crisis, neatly sums up the legacy of Thomas Midgley – mechanical engineer, self-taught chemist and, given the nature of his job and inventions, arguably a chemical engineer.

He was celebrated as a prolific inventor who, armed with little more than a can-do attitude and a periodic table, solved the longstanding problem of engine knock and gifted the world affordable coolants for refrigerators and air conditioning units, not to mention propellants for all manner of aerosols.

Only years after Midgley’s untimely death in 1944 did the full impact of his two key inventions – tetraethyl lead and CFCs – become known. Today, he is described, in a much less reverent voice than in contemporary tributes, as the man who “had more impact on the atmosphere than any other single organism in Earth’s history.” Time certainly made Midgley’s good uncouth.

Midgley had, by all accounts, a brilliantly inventive mind, untroubled by received wisdom. Undaunted by even the most apparently complex tasks, he was a hands-on pragmatist and eternal optimist.

“What do you want me to do next, boss?” was a catchphrase fondly remembered by said ‘boss’, Charles Kettering – the automotive inventor and owner of Dayton Engineering Labs, later bought by General Motors. On occasion, simple luck came to the rescue when Midgeley’s sometimes unorthodox understanding of science let him down.

That was certainly the case with the development of anti-knock additives. ‘Knocking’ – the early ignition of fuel in the cylinder, when the piston is still rising – was a major problem in automotive engines at the start of the 20th century, causing cars to run roughly and inefficiently. Midgley’s task was to find out the exact cause of this phenomenon.

Midgley quickly found that knock was due to a rapid rise in pressure just after ignition. His theory, that it might be possible to prevent the pressure rise by dyeing the fuel red (which, he and Kettering reasoned, would cause the fuel to absorb more radiant heat and evaporate completely) was as far-fetched as they come. But Midgley got lucky: the only oil-soluble ‘dye’ he could find on a Saturday afternoon was iodine – and iodine did stop the knock (though colour had nothing to do with it, as Midgley soon realised).

He concluded that engine knocking was linked to the molecular chemistry of the fuel, and  acquired a Periodic Table to give his search some structure. “We abandoned the method of trial and error in favour of a procedure based on the Periodic Table. Predictions began fulfilling themselves instead of fizzling out,” he later wrote.

Midgley found that the anti-knock effect of elements increased when descending a group and moving from right to left across a period. Many promising candidates turned out to be unsuitable but eventually tetraethyl lead emerged as the additive of choice, once Midgley had solved the trifling problem of extracting sufficient quantities of bromine (needed to prevent the formation of lead oxide during combustion) from sea water.

The poisonous effect of lead was already well understood at the time, and indeed Midgley received letters from several well-known scientists and engineers urging him to stop his work on TEL, calling it “a creeping and malicious poison”.

Midgley and Kettering, convinced that any negative side effects were negligible, dismissed the warnings. Indeed, in a letter to an analytical chemist working on the project, Midgley remarked: “It would not surprise me if in the course of using tetraethyl lead for a year that some of your men would experience a slight case of painter’s colic. This is nothing to worry about as several of our boys have it.”

Midgley was adamant that there was not enough lead in the petrol to raise any concerns about lead emissions from exhaust fumes, though he did have some concerns that “fanatical health cranks” might force through restrictive legislation regardless. Therefore, TEL was only ever referred to as “ethyl” in all official correspondence and in the marketing literature.

And with good reasons: manufacturing TEL would soon cause a string of deaths, ill health and mental health issues. Between 1923 and 1925, 15 workers on the TEL production lines died due to lead poisoning. Dozens more suffered incurable neurological damage and mental illness. DuPont’s Deepwater TEL plant soon became known as the “House of Butterflies”, in reference to one of the more common hallucinations at the site. Most notorious, however, was Standard Oil’s plant in Bayway, New Jersey, which was closed down by the state authorities after only two months. In that time, five workers had died and the majority of the others were hospitalised. Kettering blamed the workers’ recklessness for the deaths. Others claimed they were “working too hard”.

While the US Surgeon General launched a series of enquiries into the health risks of leaded fuel, Midgley dealt with the press.

The show must go on

Midgley was not just a scientist and inventor, he also had a talent for public speaking and a flair for showmanship. Running TEL all over his hands and deeply inhaling the fumes, Midgley proclaimed: “I’m not taking any chance whatever – nor would I take any chance doing that every day.” The show was widely reported, allaying public fears about the health effect of TEL. Less widely reported were the prolonged breaks Midgley had to take to reconvalesce from the effects of the chemicals he had been working with.

The demonstration – coupled with an inconclusive report from the Surgeon General which found that, given the right conditions, it was possible to manufacture TEL safely – removed the questions about the safety of lead additives from the public agenda. By 1963, TEL was present in 98% of petrol sold in the US. A 1965 study found that levels of airborne lead had increased 1000-fold between 1923 and 1965. Even so, it was difficult to clearly demonstrate that the lead was causing actual harm. Lead remained a ubiquitous fuel additive throughout the world until the 1980s, when the introduction of automotive catalysts – which are poisoned by lead – forced their replacement in most countries. 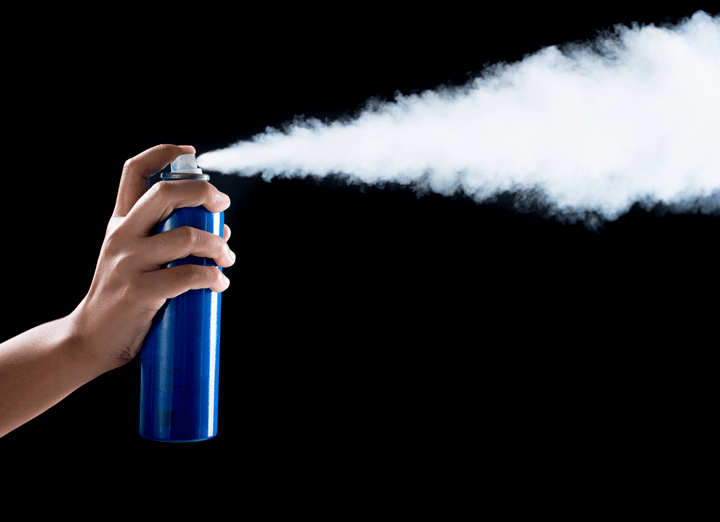 Midgley’s next task was to solve a longstanding problem for the refrigeration industry, which was to find a better refrigerant for use in air conditioning units that, unlike the alternatives at the time (including propane, ammonia, sulphur dioxide and chloromethane), was neither flammable, toxic or explosive.

Midgley returned to his trusted Periodic Table, concluded that fluorinated compounds would hold the answer, and in record time developed dichlorodifluoromethane. Sold under the trade name Freon, it was the world’s first CFC. “It proved to have just the properties required,” remembers Kettering. “It is highly stable, non-inflammable, and altogether without harmful effects on man or animals.”

Midgley’s flair for showmanship once again came into play when he demonstrated CFCs in a lecture to the American Chemical Society. Kettering recounts: “He demonstrated both their non-toxic and their non-inflammable properties in one breath, so to speak. This he did by taking his lungs full of the vapour of one of the compounds and then softly exhaling it to surround and extinguish a candle burning before him.”

Freon not only became the workhorse of the air conditioning and refrigeration industry, its extreme volatility made it an ideal propellant, and it was extensively used in all manner of sprays, starting with hand-held insecticides in WWII.

Like TEL, CFCs were a huge commercial success and used in vast quantities around the world. Their benefits were obvious, leading to their extensive use in everything ranging from fridges to air conditioning, asthma inhalers, deodorants and hairsprays, where they were used for over half a century. It was only in the 1980s that the extent of the damage CFCs had caused to the ozone layer became apparent, leading to their ban and phase-out under the Montreal Accord.

Strangled by his own creation

As for Midgley, his untimely death at the age of 55 meant that he never knew about the environmental impact of either of his innovations. During his lifetime, the American Chemical Society named Midgley its president and awarded him some of its highest honours: the Perkin Medal, the Priestley Medal and the William Gibbs Award.

Ultimately, it was another of his inventions that would claim his life. At the age of 51, Midgley contracted polio, and the disease cost him the use of his legs. Rather than bemoan his ill-fortune, Midgley devised an elaborate system of motorised pulleys to allow him to turn and get out of bed. Unfortunately, one night Midgley became tangled in the ropes, and his own invention proceeded to strangle him.

From today’s point of view, it is easy to take a critical view of Midgley and his innovations, especially given what we know of the long-term effects his innovations have had on health and the environment. Nevertheless, he was a true innovator, gifted with a rare combination of engineering practicality, scientific reasoning and showmanship that allowed him to turn his innovations into important commercial success stories.

Because of this, he already knew in his lifetime that he had changed the world, though it takes the benefit of hindsight to know how.

Donald Campbell and colleagues – Fuelling a way of life

Remaining Relevant in a Changing World