OIL and gas companies have approved US$50bn of investment since 2018 in major projects that undermine climate goals, Climate Tracker reports.

The financial think tank warns that all the oil majors are making investment decisions that contravene the Paris Agreement climate targets of keeping warming well below 2˚C, and that these decisions threaten shareholder return as they will not deliver adequate returns in a low-carbon world. Furthermore, it warns that later this year companies will decide whether to approve another 12 inconsistent projects worth US$21bn.

Carbon Tracker used benchmark scenarios on how fossil fuel use must dramatically drop to ultimately meet net-zero emissions targets to determine which projects sanctioned last year (or set for sanction this year) fit within the limited remaining carbon budget, and which are risks to investors. Its report Breaking the Habit analysed 71 of the world’s largest oil and gas companies using project data supplied by consultancy Rystad Energy.

It has found that ExxonMobil, Chevron, Shell, BP, Total, Eni, ConocoPhillips, and Equinor each spent at least 30% of their investment in 2018 on projects that are inconsistent with limiting warming to 1.6˚C. It estimates that oil companies could spend US$6.5trn by 2030 if they base their investment decisions on current emissions policies, but this will lead to 2.7˚C of warming. But as emissions policies become more stringent, the number of viable projects will be curtailed to around US$4.3trn, meaning investments worth US$2.2trn could become stranded. It advises that demand for oil can be satisfied with projects that break even at below US$40/bbl.

“The eternal search for growth in the context of finite planetary limits means either the failure of climate targets, exposure of investors to stranded assets – investments that destroy value when industry dynamics change – or both,” the report reads.

Projects sanctioned last year that reportedly will not deliver adequate returns in a low-carbon world include Shell’s US$13bn LNG Canada project and BP, Total, ExxonMobil and Equinor’s Zinia 2 project in Angola. It also argues that no new oil sands projects can be Paris-compliant, yet last year ExxonMobil sanctioned the US$2.6bn Aspen project, which is the world’s first greenfield development in five years. 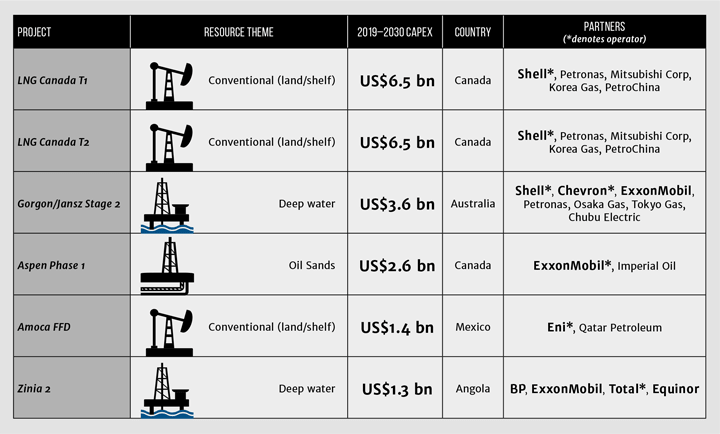 “Every oil major is betting heavily against a 1.5˚C world and investing in projects that are contrary to the Paris goals. Investors should challenge companies’ spending on new fossil fuel production. The best way to both preserve shareholder value in the transition and align with climate change goals will be to focus on low-cost projects that will deliver the highest returns,” said Carbon Tracker Senior Analyst Andrew Grant.

It reports that without the deployment of CCS, sanctioned projects already exceed the demand for oil allowed under the 1.5˚C stretch target set at Paris. Compared to business as usual, capex on new oil projects should be 83% lower in a 1.6ºC scenario and 60% lower in a 1.7–1.8ºC scenario – even with significant deployment of carbon capture and storage (CCS).

A spokesperson for Shell told the Guardian: “We agree that the world is not moving fast enough to tackle climate change. As the energy system evolves, so is our business, to provide the mix of products that our customers need.”

Earlier this week, the trade association Oil & Gas UK published a plan for how the sector can contribute to meeting the Government’s climate target of the country achieving net-zero emissions by 2050: Roadmap to 2035: a Blueprint for Net-Zero.

Published after engagement with more than 2,500 industry stakeholders, the plan discusses how industry can reduce emissions from production, and support reductions down the supply chain through the development and commercialisation of low-carbon technologies including CCS and hydrogen.

Noting that pathways towards climate targets see demand for oil and gas dropping 54% today to 48% in 2040, OGUK reasons that the UK should support domestic production over imported energy, and targets production of 1.1m bbl/d of oil compared to 1.7m bbl/d today.

The UK’s Committee on Climate Change has set a target for oil and gas production to contribute just 500,000 t/y of CO2 by 2050, meaning operators have to reduce today’s emissions intensity per million barrels of oil from 24,000 t of CO2 to just 4,000 t.

OGUK says that gas turbines used to generate power offshore are the largest source of emissions so present big opportunities for savings, along with flaring and venting of waste gas.

It acknowledges that savings through the supply chain of emissions produced from the use of its products will require the capturing of emissions. It recognises the nascent development of CCS but says with support from the Government similar to that which spurred the adoption of wind power, oil and gas operators and suppliers could diversify their businesses and become CCS providers.

Earlier this year, the Business, Energy and Industrial Strategy Committee criticised the Government for its vague and ambiguous policies relating to CCS and warned that without the technology the cost of meeting climate targets – before they were raised from 80% to net-zero - would increase from 1% to 2% of GDP by 2050.

OGUK says industry can work with government and regulators to develop a commercial, regulatory and technical framework which will allow the required assets to be made available for transport and storage of carbon. It also points to the US$3.4bn worth of investments that the world’s largest publicly-traded oil and gas companies made in low carbon energy in 2018; though notes this represents a small portion of overall capital budgets.

The reports comes as the Oil & Gas Technology Centre in Aberdeen announced the creation of Net Zero Solution Centre, backed by industry players including BP, Shell and Wood, that will work to accelerate the development of CCS and hydrogen.

“While we don’t have all the answers to the big challenges we face, we have started work on what we know can be done. We are ready to work with others in developing some of the new solutions the UK needs, and the Net Zero Solutions Centre is a great example of this.”

The UK’s Business, Energy and Clean Growth Minister Kwasi Kwarteng said it showed the sector was serious about decarbonising.

“The highly-skilled offshore energy sector will be integral to the UK’s energy transition, developing solutions to support the sector’s significant contribution to our economy.”

While the report was welcomed by the Government, it came in for harsh criticism elsewhere.

WWF Scotland’s Director Lang Banks said: “Sadly, the actions set out in the oil and gas industry’s 2035 road map fall well short of what is actually needed to address today’s climate emergency and accelerate a transition to a zero-carbon future that is fair for workers and communities.”

Scottish Greens MSP Mark Ruskell said: “The sector says it recognises the need to change, but this overt lobbying argues that maximum extraction of fossil fuels is compatible with tackling the climate emergency. The industry is putting its own interests ahead of our survival.”