POROUS wood from trees like poplar and pine could be used for an efficient, biodegradable water purification device, according to researchers. 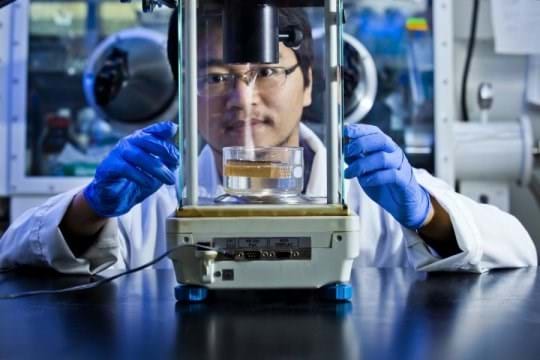 Hu with the solar steam device being tested (Credit: University of Maryland)

As many countries face freshwater shortages, there is increasing interest in developing technologies to produce drinking water. A simple technique called ‘solar steam generation’ involves running water through a material or device heated by sunlight. The water evaporates into steam, leaving salt and contaminants behind.

While materials such as graphite and copper nanotubes can be used, researchers at the University of Maryland, US, believe that wood is a biodegradable alternative.

“I think there are many, many materials that can be used in solar steam generation, but wood really stands out in terms of performance as well as cost,” said Liangbing Hu, an engineer at the A James Clark School of Engineering and the University of Maryland Energy Innovation Institute.

In research published in Joule, his team states that this is the case because it has natural inbuilt microchannels for capillary water transport, shows good hydrophilicity and has a lightweight structure.

His team tested the steam generation ability of several types of wood under different levels of light. The only treatment applied to wood was carbonisation on the top surface, which made it more porous. “In our case, you just take a piece of wood and burn the surface. That's it,” he says.

Tests showed that porous wood types like pine and poplar were very efficient, with water-to-steam energy conversion by poplar wood as high as 86.7%, under a light intensity of 10 kW m2 – the equivalent irradiance of ten ‘suns’. Efficiency was still high – around 60% – under an intensity of 1 kW m2.

The researchers believe that the natural characteristics of wood will also improve its ability to generate clean drinking water from saltwater.

A common problem with other materials is that salt deposits build up inside a device as water evaporates, preventing further evaporation. But since wood channels run straight up and down, salt deposits can simply dissolve back into the water below without blocking the way.

“We are trying to push this technology further for use as a product, eventually, for addressing water issues with high efficiency,” Hu said.