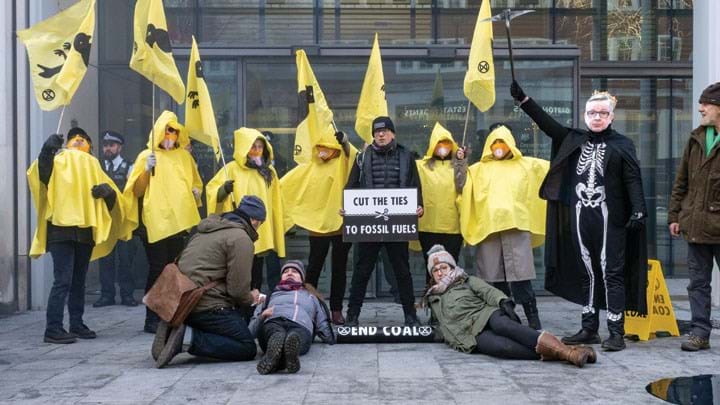 FRIENDS of the Earth has filed a legal challenge in the UK’s High Court against the government’s approval of the country’s first coal mine in 30 years. The approval sparked widespread climate concerns and doubts have been raised about an apparent lack of demand from the steel industry it is intended to serve.

Approval of the mine was announced in December, as Michael Gove, secretary of state for levelling up, agreed with the Planning Inspectorate’s recommendation, allowing the development to commence within the next three years. Yet it faces stiff opposition.

Announcing the environmental campaign group’s intent to file a challenge, lawyer at Friends of the Earth Niall Toru said: “By giving the go-ahead to this polluting and totally unnecessary coal mine the government has not only made the wrong decision for our economy and the climate, we believe it has also acted unlawfully … [It] has failed to account for the significant climate impacts of this mine, or how the much-needed move to green steelmaking will be impacted by its approval.

“With the world facing a climate emergency, we shouldn’t have to take this challenge to court. Any sensible government should be choosing to leave coal in the ground, and accelerating the transition to a safe, clean, and sustainable future.”

Proponents of the mine have pointed to the 500 jobs the project is expected to create. Friends of the Earth argues that just as many jobs could be created through a home insulation programme that would simultaneously reduce emissions, lower bills, and warm homes.

Tony Bosworth, Friends of the Earth campaigner, added: “The people of West Cumbria have been badly let down by years of government under-investment. Long-term, sustainable jobs are desperately wanted and needed […] West Cumbria should be at the forefront of the transition to a green economy that would see the UK leading the way towards a zero-carbon future.”

The £165m (US$201.8m) Whitehaven mine project was originally approved in 2019. In early 2021, ahead of COP26, the UK government suspended approval as it prepared to take on the presidency of the climate conference.

The mine, which will primarily serve the steel industry, will produce 2.8m t/y of coking coal with 360,000 t/y expected to supply the UK steel sector. Operations are to end no later than 2049, just ahead of the UK’s 2050 net zero target date. Over a 25-year operational life, West Cumbria Mining’s (WCM) project is expected to emit about 1.9m t/y CO2e for a “likely mitigated scenario”. In the document published outlining the decision to approve the mine, the levelling up department concludes that accounting for mitigation, the development’s greenhouse gas emissions will be “relatively neutral, and not significant”.

Friends of the Earth has filed its challenge on four grounds including the impact the mine will have on the nation’s sixth carbon budget, which covers 2033–2037. While West Cumbria Mining is required to buy international offsets for residual emissions from the mine, Friends of the Earth argues that the minister who approved the project made the “wrong and unlawful” conclusion that this will allow the mine to be net zero within the budget when such offsets do not count to the budget.

The group is also challenging on the ground that approving a coal mine as the country makes claims towards climate leadership will undermine its reputation and ability to influence others, as well as set a bad precedent for others to follow.

Green Party MP Caroline Lucas has reportedly called the move “a climate crime against humanity” and party co-leader Adrian Ramsey said the decision had been “cynically delayed until just after we have ceased to hold the COP presidency”.

Friends of the Earth says the result from a pending legal challenge over a crude oil project could also impact the approval of the coal mine. The Supreme Court is reviewing whether downstream emissions should be considered during a project’s environmental impact assessment.

Friends of the Earth says that if the court’s rules that the crude project should have considered the downstream emissions, then the approach taken to the Whitehaven project will be wrong.

Friends of the Earth’s final ground for filing its challenge is concern over the extent to which the proposed coal mine will substitute for other coal in the market or be additional to it, as was mentioned at an inquiry where it presented evidence in 2021. In his decision to approve the project, Gove concluded that the mine would not cause a net increase in carbon emissions from coal coking due to a degree of substitution and/or the potential for a significant degree of substitution.

“He failed to deal with the point that there needs to be complete substitution of WCM coal to ensure a “neutral” effect on climate change globally,” said the group.

The UK Climate Change Committee (CCC) has highlighted that 85% of the coal is planned for export and the project will commit the UK to emissions from coking coal for which there may not be domestic demand after 2035.

Prior to approval, Materials Processing Institute CEO Chris McDonald noted that of the UK’s two blast furnace steel producers, the coal would be unsuitable for use by British Steel. Furthermore, Ben Stewart of Greenpeace stated that neither British Steel nor Tata have committed to purchasing the coal.

McDonald additionally highlighted that steel companies in the UK and Europe are investing heavily in green technologies to move away from coal.

Illustrating a green shift in the steel industry, just a day before Friends of the Earth’s filing on 13 January, the industry associations Responsible Steel and the Sustainable Steel Principles Association (SSPA) announced a memorandum of understanding (MoU) to accelerate the decarbonisation of steel. Responsible Steel provides an international standard for steel site certification, and the SSPA provides a framework for banks to assess the decarbonisation of the steel companies within their portfolios, as well as the climate alignment of their steel lending portfolio.

Meanwhile, Liberty Steel UK has announced a restructuring programme that would put 440 jobs at risk, but insisted it remains committed to a long-term plan to grow green steel production at its Rotherham facility to 2m t/y. The company says the restructure will help it withstand challenging market conditions, serve strategic supply chains, and provide a foundation for a decarbonised UK steel industry. Amongst other measures it will see the company idle processes at facilities in Newport and West Bromwich, with the former being transformed into a sales and distribution hub. Primary production at Rotherham will be reduced.

Liberty intends to restart production and the idled plants “when market and operating conditions allow”.