A COMPLETE overhaul of the design of the lithium-air battery has led to the development of a prototype that can function for hundreds of charging cycles using air, as opposed to pure oxygen.

Lithium-air batteries are capable of storing five times more energy than the lithium-ion batteries currently used to power items such as laptops and electric vehicles. So far, their development has proven challenging, with prototypes only able to work with tanks of pure oxygen which is unpractical for a battery and also hazardous due to the flammability of oxygen.

When a lithium-air battery is being discharged, lithium from the anode travels across a conductive electrolyte to react with oxygen in the air, producing lithium peroxide at the cathode. The reaction is reversed when the battery is charging, when the lithium peroxide is broken down into lithium and oxygen. However, lithium is highly reactive and also reacts with water and carbon dioxide in the air which creates deposits of lithium hydroxide and lithium carbonate on the cathode. These deposits coat the cathode, rendering it ineffective.

A team of researchers from the US’ University of Illinois at Chicago and Argonne National Laboratory have developed a lithium-air battery that can overcome these problems through a unique combination of anode, cathode, and electrolyte. They coated the lithium anode with a layer of lithium carbonate, which allows lithium ions from the anode to enter the electrolyte while blocking unwanted compounds from reaching the anode. They coated the lattice structure of the cathode with a molybdenum disulfate catalyst, and created a new hybrid electrolyte made of an ionic liquid and dimethyl sulfoxide. The cathode coating and the electrolyte work together to prevent the formation of unwanted by-products on the cathode, therefore improving the efficiency of the battery. 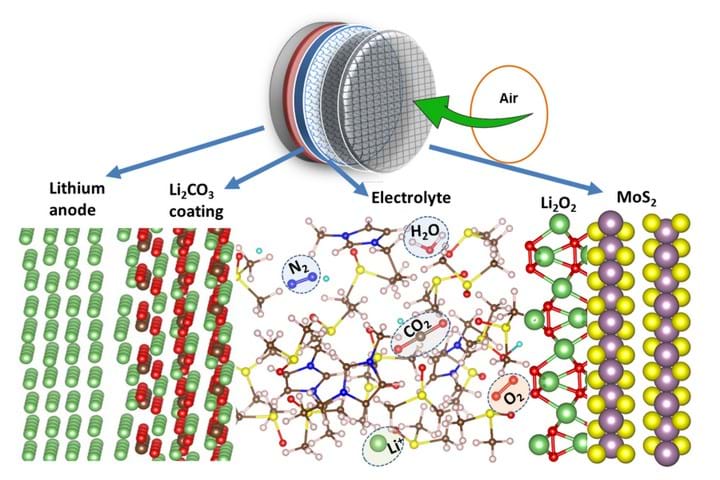 A schematic of the lithium-air battery. Credit: UIC and Argonne National Laboratories

“The complete architectural overhaul we performed on this battery by redesigning every part of it helped us enable the reactions we wanted to occur and prevent or block those that would ultimately cause the battery to go dead,” said Amin Salehi-Khojin, assistant professor of mechanical and industrial engineering at the University of Illinois at Chicago.

The researchers demonstrated that the lithium-air battery still functions after at least 700 charge/discharge cycles. In comparison, the battery failed after 11 cycles when there was no coating on the anode.

“Our lithium-air battery design represents a revolution in the battery community,” said Salehi-Khojin. “This first demonstration of a true lithium-air battery is an important step toward what we call ‘beyond lithium-ion’ batteries, but we have more work to do in order to commercialise it.”