Sedat Elbasan / Shutterstock.com
Firefighters and forestry workers battle a wildfire in Muğla, Turkey, on 8 July 2021. Fire weather conditions will become more frequent according to the IPCC

THE frequency and intensity of extreme weather events associated with human-caused climate change is going to get worse as the world reaches 1.5oC of warming in the next 20 years, according to the latest report from the Intergovernmental Panel on Climate Change (IPCC). However, there is, it says, still time to limit the damage.

The IPCC has released a report that details how human activity has altered the climate. It also describes several scenarios on how the climate and associated weather events will continue to worsen with continued emissions.

The IPCC last reported on the science of climate change in its fifth assessment report in 2013. The new publication, Climate Change 2021: the Physical Science Basis, is the first part of the IPCC’s sixth assessment report, with two other reports also in development. The second part of the sixth assessment report will assess the vulnerability of society and ecosystems to climate change along with adaption options, and the third will look at mitigation with a focus on methods for reducing emissions. These are expected to be released in February and March next year respectively.

The report is written by 234 scientists from 66 countries, along with 517 contributing authors, who have brought together the findings from more than 14,000 peer-reviewed studies. They used improved observational datasets to assess historical warming along with the latest advancements in climate science to conclude that “it is unequivocal that the increase of CO2, methane, and nitrous oxide in the atmosphere over the industrial era is the result of human activities and that human influence is the principal driver of many changes observed across the atmosphere, ocean, cryosphere and biosphere.” The report has been approved by 195 governments.

1.5C of warming will be reached in the next 20 years

The aim of the Paris Agreement is to limit warming to 1.5oC above pre-industrial times, but we have already reached 1.1oC. Since 1850, humanity has been responsible for pumping 2,400bn t of CO2 into the atmosphere, and atmospheric CO2 concentrations are now higher than at any time in the last 2m years. To have a chance of keeping to the 1.5oC target, there is therefore a limit – a “carbon budget” on how many more tonnes of CO2 can be emitted before the target is breached. For an 83% chance of staying within 1.5oC, only another 300bn t can be emitted. If 900bn t are emitted, the chances of staying on track drop to 17%.

Natural land and ocean carbon sinks can take up atmospheric CO2, but their effectiveness becomes reduced with higher levels of emissions. This ultimately results in a higher proportion of CO2 remaining in the atmosphere.

The report models a number of scenarios depending on levels of emissions, their associated temperature rises, and the consequences of each. 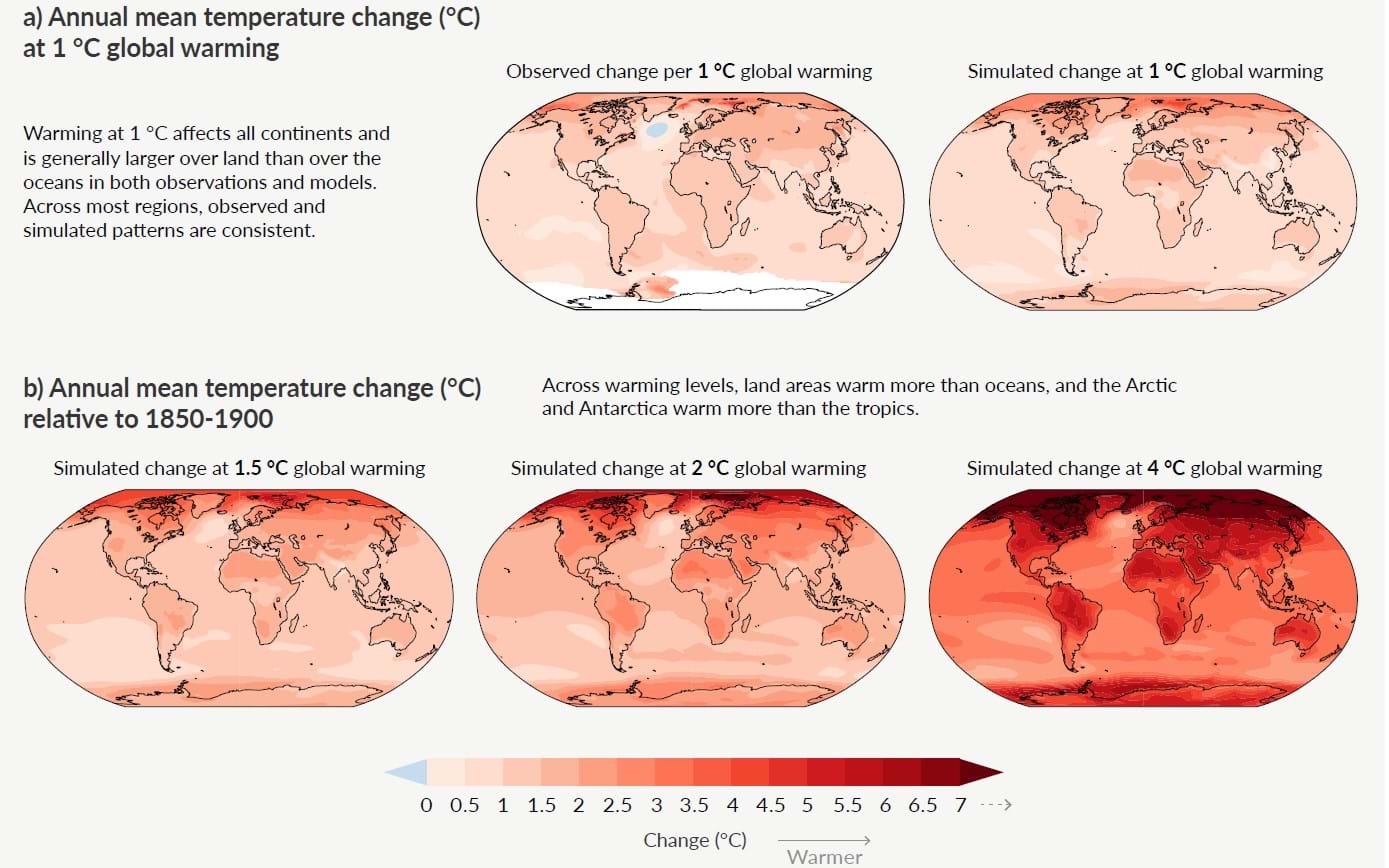 However, there is still a window of opportunity to stop temperatures rising further than 1.5oC if large-scale action is undertaken immediately. Under the best-case scenario of low emissions, warming will reach 1.5oC by 2040, rise to 1.6oC by 2060, but then cool back to 1.4oC by 2100.

Richard Betts, Head of Climate Impacts Research, Met Office Hadley Centre and a contributing author to the report, said: “It’s important to note that 1.5oC global warming is not a physical threshold when catastrophic impacts will suddenly kick in, as it is often portrayed. It’s an indication of where the risks start to become substantial.”

The report concludes that “it is now an established fact that human-induced greenhouse gas emissions have led to an increased frequency and/or intensity of some weather and climate extremes since 1850, in particular for temperature extremes.”

Every region is affected, with some more than others. Warming over land is larger than the global average, and more than twice as high in the Arctic. Even limiting heating to 1.5oC, there will be “an increasing occurrence of some extreme events unprecedented in the observational record”.

An extreme temperature event that would have occurred once every ten years without human-caused climate change will occur 4.1 times that in a 1.5oC world. Similarly heavy one-day precipitation events will occur 1.5 times and droughts will occur 2.0 times in ten years, where they were previously once-in-a-decade events.

IPCC
Projected changes in the intensity and frequency of hot temperature extremes over land, extreme precipitation over land, and agricultural and ecological droughts in drying regions. Credit: IPCC

There will be changes in rainfall patterns with more precipitation at high latitudes while it decreases over the subtropics. More frequent and severe coastal flooding will occur as the sea levels continue to rise. The number of intense tropical cyclones will increase.

The increasing temperatures will lead to more intense rainfall and flooding, as well as more agricultural and ecological droughts. Heatwaves will increase in intensity and frequency, and this will be amplified in cities since urban areas are usually warmer than their surroundings. Drought and heatwaves lead to “fire weather” conditions, where high temperatures, low soil moisture, low humidity, and high winds are conducive to triggering and sustaining wildfires. Fire weather conditions will become more frequent in some regions.

Even today – with only a 1.1oC increase in global temperatures – we are seeing unprecedented events such as the recent heavy rainfall and flash flooding across Europe and China, and the extreme wildfires that are currently burning across Greece, Turkey, Italy, the US, Canada, and Russia.

Michael Byrne, Lecturer in Earth & Environmental Sciences at the University of St Andrews and a contributing author to the report, said: “The new IPCC report reiterates, with near certainty, what we’ve known for more than a decade: climate is warming, human activities are the main driver, and it’s going to get worse. What is different now, and different about this report, is that the effects of global warming are no longer in the distant future or in far-flung corners of the world. Climate change has arrived into our daily lives and is here to stay. We knew what was coming and now it’s here.”

UN Secretary-General António Guterres said the report is “a code red for humanity. The alarm bells are deafening, and the evidence is irrefutable".

While keeping warming to a maximum of 1.5oC will help to prevent the worst-case scenarios in terms of weather extremes, there are some changes that are already locked in and are irreversible for centuries or thousands of years.

The heating of the planet has also warmed the oceans, which has also increased ocean acidification, deoxygenation, and upper ocean stratification. This will affect ocean ecosystems as well as the people that rely on them. These effects will continue to increase this century, with rates depending on emissions. The changes are irreversible on a timescale of hundreds to thousands of years.

The melting of mountain and polar glaciers will continue for decades or centuries, while thawing of permafrost is irreversible for centuries.

[2100] might seem like a long way away but there are millions of children already born who should be alive well into the 22nd Century.

Since 1901, global mean sea level has increased by 0.2 m and the rate of sea level rise is increasing. This will continue to rise through the rest of the century and even under the very low GHG emissions scenario the global mean sea level rise would be 0.28–0.55 m by 2100. Extreme sea level events such as storm surges and tidal floods that historically occurred once per century will occur at least annually in some locations by 2100.

Commenting on the consequences of sea level rise, Jonathan Bamber, Professor of Glaciology, University of Bristol and a contributing author, said: “It is clear from these estimates that a precautionary principle is the only sane approach to take because the consequences of anything else are likely to be disastrous for society, especially beyond 2100. That might seem like a long way away but there are millions of children already born who should be alive well into the 22nd Century.”

All eyes on Glasgow

The IPCC report has been released just before COP26 takes place in Glasgow, UK in November, which will give policymakers an opportunity to act on it.

The report includes regional assessments through an interactive atlas, which includes information that can be used for risk assessments, adaption, and other decision-making. It also includes a new framework to show how changes in the climate impact on society and ecosystems.

Byrne said: “The report is stark: to limit warming to 1.5oC – beyond which the impacts become much more severe – time is rapidly running out. The UK and Scottish targets of net zero by 2050 and 2045 are not fast enough, we have to be more ambitious. Let’s hope our political leaders, as they gear up to COP26 in Glasgow this November, take heed.”

Valérie Masson-Delmotte, IPCC Working Group I Co-Chair, said: “This report is a reality check. We now have a much clearer picture of the past, present and future climate, which is essential for understanding where we are headed, what can be done, and how we can prepare.”

The report found that of the 1.1oC of warming that has already occurred, 0.3oC of this has been due to methane emissions. This finding offers an opportunity for rapid action in terms of oil and gas producers reducing their methane emissions.

Fred Krupp, President of the Environmental Defense Fund, said: “The report quashes any remaining debate about the urgent need to slash methane pollution, especially from sectors such as oil and gas, where the available reductions are fastest and cheapest. When it comes to our overheating planet, every fraction of a degree matters – and there is no faster, more achievable way to slow the rate of warming than by cutting human-caused methane emissions.”

Tim Palmer, Royal Society Research Professor at the University of Oxford, highlighted the importance of continuing to advance climate modelling to help plan for the future with greater confidence. “If we do not halt our emissions soon, our future climate could well become some kind of hell on Earth. In this respect, the real world may be running ahead of what the AR6 [sixth assessment report] climate models can simulate. In particular, the extraordinary heat extremes observed recently in British Columbia, and the rainfall extremes over Zhengzhou and the Rhineland, lie well outside the range of what can be simulated by the AR6 models. This reminds us that whilst the case for decarbonisation is clear, the science of climate change is far from done and dusted.”

In response to the IPCC report, COP26 President Alok Sharma said: “Our message to every country, government, business and part of society is simple. The next decade is decisive, follow the science and embrace your responsibility to keep the goal of 1.5oC alive. We can do this together, by coming forward with ambitious 2030 emission reduction targets and long-term strategies with a pathway to net zero by the middle of the century, and taking action now to end coal power, accelerate the rollout of electric vehicles, tackle deforestation and reduce methane emissions.”