The planned closures come as GSK has agreed to sell its cephalosporins antibiotics business to Sandoz, a division of Swiss pharma firm Novartis, for as much as US$500m.

The drugmaker said the sale aligns with its plans to simplify its portfolio and invest in its R&D pipeline for new drugs. The products being divested include the Zinnat, Zinacef and Fortum brands, all of which are now off-patent.

Keith Plumb, Process, Safety and Equipment Consultant at Integral Pharma Services, said GSK’s decision to close its manufacturing operations is bad news for the community, the skilled workers, and for pharmaceutical manufacturing in the UK in general.

“Over the last few years, the UK pharmaceutical industry has gone from being a major exporter and contributor to the UK’s balance of payments to a net importer of products,” he said.

The UK trade balance (exports minus imports) for medicinal and pharmaceutical products has fallen from a surplus of more than £16bn (US$22.6bn) in 2010 to a trade deficit of £2.7bn in 2020, according to figures from the UK Office for National Statistics. 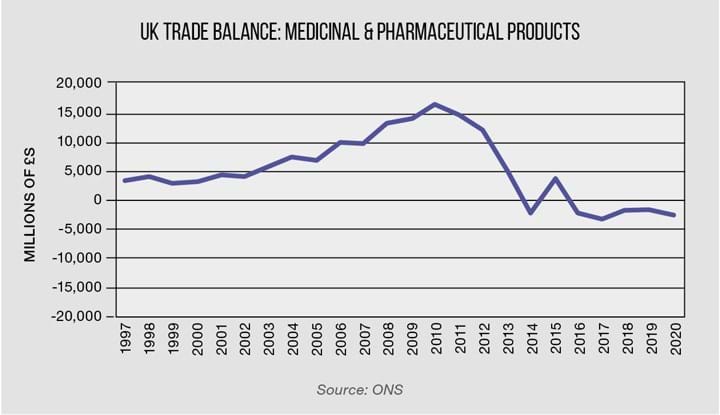 Plumb contrasted the UK situation with that of the thriving sector in the Republic of Ireland.

“When I am involved in projects outside the UK most of the English-speaking engineers I meet are from the Republic of Ireland. This has arisen because their higher education establishments are offering the required education and then the graduates hone their skills in the booming biopharmaceutical manufacturing industry in the Republic.”

“The Republic of Ireland and Belgium are now major pharmaceutical manufacturing centres of excellence and the UK is missing out on the move to bioprocesses, with a subsequent significant loss of manufacturing skills.”

Plumb said he would like to see the UK Government support the sector with more funding for development, as seen with its investment in the Vaccine Manufacturing & Innovation Centre, and a form of protection to prevent manufacturing companies shutting down UK sites in preference to ones elsewhere that have the same cost base.

The deal is expected to close in the second half of 2021. Sandoz will pay US$350m once the deal completes and up to US$150m depending on milestones reached during the transfer of operations to Austria by 2025. In the meantime, GSK has a four-year manufacturing and supply agreement with Sandoz.

GSK said it is providing support to potentially affected employees and is committed to supporting the local communities that are impacted.