FATALITIES and accidents at work are likely to increase, and a better understanding of engineering capacity and capability is needed for engineering to intervene, says a report from the Royal Academy of Engineering.

Global Engineering Capability Review, the first report from a new £15m (US$18.7m) partnership between RAEng and Lloyds Register, reviews the ability of 99 countries to conduct key engineering activities in a safe and innovative way. It notes that around 1,000 people die every day due to an accident at work, and that data from the International Labour Organization shows that fatal accidents are on the rise in many developing economies as more money is pumped into new infrastructure projects and upgrades.

The report ranks countries by six measures of capability: knowledge; labour force; engineering industry; infrastructure; digital infrastructure; and safety standards. The RAeng wants the report to provide a baseline to help policymakers and business understand engineering strengths within countries so they can identify and bridge gaps to safer and more sustainable development. 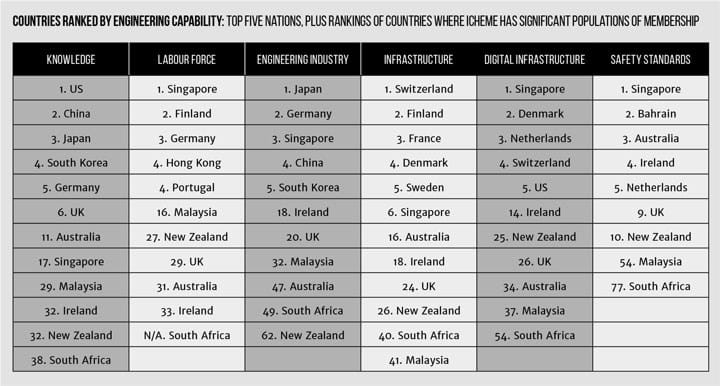 The report cites Malaysia as a top performing country, noting it is the world’s 23rd highest investor in R&D, 24th for patent applications filed in 2018; and punches above its weight as 19th for the number of universities ranked within the world’s top 500 for engineering. This belies a global GDP ranking of 41 and reflects a strong emphasis on engineering in education, the RAEng notes.

The report draws two key conclusions. Firstly, it notes there is a need for many countries to strengthen their evidence base by collecting more accurate data on their labour forces and aligning the definition and categorisation of the term “engineer”.

Secondly, it says countries often face problems not in producing enough engineers but producing high-quality engineers. Among its recommendations, it says institutions should develop interdisciplinary engineering curricula and alternative education models focussed on project-based learning that provide students with real-world engineering experience; and there should be collaboration among different countries’ engineering regulation boards in order to develop international professional certifications that encourage greater movement of engineering labour.

Richard Clegg, CEO of Lloyd’s Register Foundation, said: “In today’s modern world, much of the critical infrastructure we rely on, from food to transport and energy, requires good engineering standards of design, construction, operation and maintenance to keep them safe. With the global growth in critical infrastructure, particularly the case in developing economies, there is a need to ensure that the availability of qualified and professional engineers satisfies demand.”