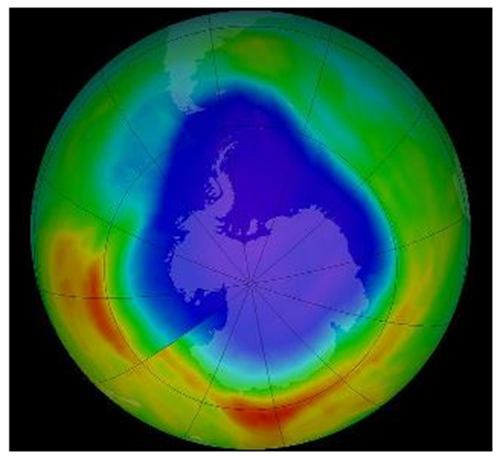 DICHLOROMETHANE, an unregulated chemical known to deplete the ozone layer, could delay the recovery of the ozone layer by up to 30 years, according to researchers.

A team of researchers in the UK and the US led by Ryan Hossaini at Lancaster University’s Lancaster Environment Centre, found that emissions of dichloromethane – which amongst other things is used as an industrial solvent, a polymer blowing agent and an aerosol propellant – has risen significantly in recent years. Dichloromethane is only short-lived in the atmosphere, and so is not included in the Montreal Protocol which regulates ozone-depleting chemicals. However Hossaini and the team believe that at current levels, dichloromethane may now be contributing to ozone depletion.

The Montreal Protocol was introduced in 1987 to regulate emissions of ozone-depleting chemicals, after a hole in the atmosphere’s protective layer was found earlier in the decade. After its introduction, the ozone layer began to recover, and is now predicted to return to pre-1980 levels between 2046–57.

Hossaini and the team used simulations with a global stratospheric forecasting model called SLIMCAT to determine the potential effects of rising dichloromethane levels, beginning with data collected over the past two years by the National Oceanic and Atmospheric Administration (NOAA) in the US.

"The increases observed for dichloromethane from our measurements are striking and unexpected; concentrations had been decreasing slowly in the late 1990s, but since the early 2000s have increased by about a factor of two at sites throughout the globe. It is uncertain what is driving this growth. However, it could be related to increased use of this chemical as a solvent in place of other long-lived chemicals (eg CFCs and HCFCs) that have been phased out, or from use as feedstock in the production of other chemicals,” said study co-author Stephen Montzka from the NOAA.

"Ozone is an important climate gas, and changes to its abundance, including due to the increasing influence of dichloromethane, could be relevant for refining future climate predictions. We should be mindful to the growing threat to stratospheric ozone posed by dichloromethane and similar chemicals not controlled by the Montreal Protocol,” he said.

David Rowley, a senior lecturer and atmospheric chemist at University College London, who was not involved in the study, noted that short-lived chlorocarbons like dichloromethane have generally “flown under the radar” as they were previously thought not to present a risk to the ozone layer.

“The results are significant, across a range of scenarios, since they imply a significant reversal of Montreal-led reductions in total stratospheric chlorine, and the consequent effects on ozone. It also implies that we need to take a closer look at the impact of a much wider range of molecules containing halogens – especially chlorine and bromine – to understand more fully the impact of our activities on our world,” he said, adding that the wide range of uses of chlorocarbons like dichloromethane will make their regulation much more arduous and controversial than CFCs.