Dam collapse tragedy could have been prevented 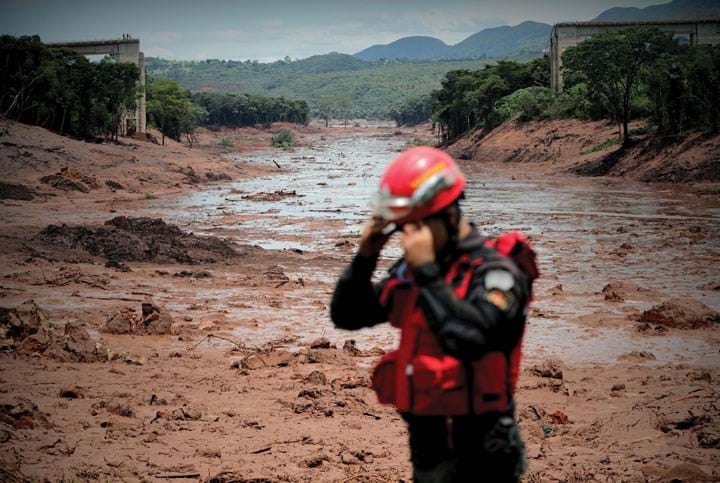 BRAZIL’s National Mining Agency (ANM) has released a technical report on the history of the tailings dam at Vale’s Córrego do Feijão iron ore mine near Brumadinho, which fatally collapsed earlier this year. The report says that Vale withheld information which could have helped to prevent the dam collapse.

Tailings are the waste left behind from processed ore. The rock is crushed and ground up and put through a chemical process to recover the valuable component, resulting in a slurry made of fine uneconomic rock and chemical effluent that is stored in tailings dams. When the Vale dam collapsed, it released a torrent of muddy slurry which buried the surrounding area.

So far, 254 people have been confirmed dead and 16 are still considered missing, following the mine tailings dam collapse on 25 January.

The report outlines what may have led to the collapse and the inconsistencies between the information provided to ANM and what Vale technicians reported in internal documents. ANM learned that important information had been withheld – thereby preventing an alert about the compromised safety of the Vale dam.

Experts have said that regulators lack the number of independent inspectors to oversee all of Brazil’s tailings dams; giving mining companies wide scope to use independent auditors. At the time of the dam collapse, ANM had eight technicians responsible for overseeing 425 dams in the country. ANM primarily relies on companies that own the dams to provide it with appropriate and clear information about them and works on a system based on responsive supervision.

Companies are meant to inform ANM about the status of their dams and give the regulator information about the structure every two weeks. If an issue occurs, it is to be reported immediately and then ANM can use the information to trigger mechanisms to mitigate problems. This includes sending out technicians to investigate and identify actions to reduce risk and prevent disasters like the Vale mine tailings collapse.

ANM detailed a number of instances where Vale failed to follow the procedure or reported inconsistent information. These include issues relating to the installation of a deep horizontal drain, part of the dam’s drainage system.

Drainage systems can be installed in tailings dams to reduce water levels and dry out tailings, reducing the threat posed. During the installation of one of the drain pipes, the presence of solids was detected, which is considered abnormal, as mine waste is supposed to remain dry and stable inside the dam. The material was detected in the injected water used to make the drainage holes. Vale interrupted the installation of the drain system to seal the hole, but never reported the incident to ANM. Furthermore, during the drilling of the drain holes, two piezometers recorded a rise in water pressure to emergency levels, indicating dam instability. Vale did not inform ANM.

In another case involving the water drainage system, a Vale field inspector noted a water percolation problem in the system but downplayed the severity of the issue to ANM; and according to ANM gave it a lower severity rating than was warranted. The higher rating which ANM thought the structure deserved, based on pictures from internal reports, would have increased the risk category of the structure and it would have become a priority for inspection. In addition, Vale would have been required to perform daily inspections and report to ANM daily. However, the failure was never reported to ANM.

According to The Wall Street Journal (WSJ), a Vale employee testified that about two weeks before the Brumadinho disaster, automated instruments tracking water levels at the dam gave readings that would have triggered an evacuation. Reportedly regulators weren’t informed, and Vale claimed the readings were caused by configuration issues in the equipment.

In Vale’s penultimate report before the breach, dated 8 January and sent to ANM on 30 January (after the collapse), no anomalies were reported. However, on 15 February the company filed a report from a survey carried out on 22 January (three days before the collapse) which reported all of the structure’s irregularities.

“If ANM had been informed correctly, it could have taken precautionary measures and charged the company with emergency actions, which could prevent the disaster,” the regulator said.

Based on its findings, ANM sent Vale 24 notices; and it will send its report to the Federal Police, the Comptroller General of the Union (CGU), the Federal Court of Accounts (TCU) and the Federal Prosecutor Service (MPF).

The investigation into the incident is ongoing.