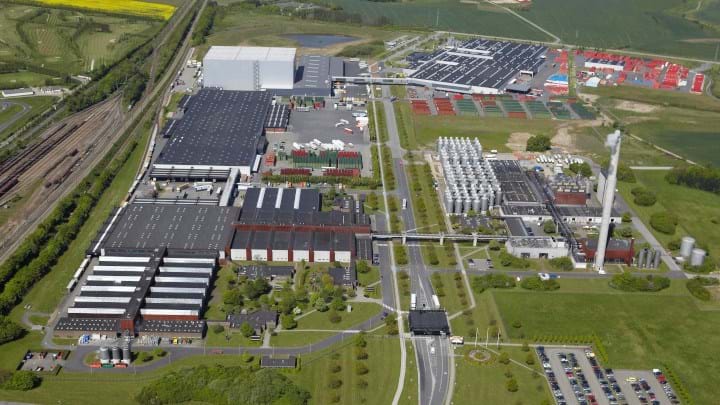 The state-of-the-art water recycling plant is to be built at Carlsberg's site in Fredericia, Denmark

BREWING company Carlsberg has announced investment in a state-of-the-art water recycling plant that is expected to halve water usage and reduce energy consumption at its brewery in Fredericia, Denmark.

The water recycling plant is to recycle 90% of process water at the Fredericia brewery, halving its current average water consumption for brewing beer, “taking it below our 2030 target,” said Philip Hodges, Executive Vice President of ISC at Carlsberg.

At Fredericia, water usage is currently below Carlsberg’s global average at 2.9 hL of water per hL of beer. The brewery produces more than 4m hL/y of beer. The water recycling plant is expected to reduce water usage to 1.4 hL of water per hL of beer, “which will make it the first brewery to close the water loop for all cleaning and technical processes in a plant of that scale,” said Hodges.

Additionally, the water recycling plant is expected to reduce the brewery’s energy consumption by 10% through biogas production and recirculation of hot water, further contributing to Together Towards ZERO.

Biogas is to be produced via anaerobic digestion of dissolved organic matter in wastewater, according to Hodges. He added that waste heat from the wastewater will act as an additional source of energy. Breweries use high pressure hot water for process consumers and a lower pressure hot water steam for cleaning in a separate loop – this loop is suitable for collecting heat recovered from various processes such as flue gases, said Hodges.

The water recycling plant project is a partnership initiated through DRIP (Danish partnership for Resource and water efficient Industrial food Production) a private-public partnership focussed on water efficiency in the food industry, one of the largest water-consuming industries in Denmark and globally. The project involves universities and technology providers, as well as Danish veterinary, environment, and food authorities, which will ensure that the project meets Denmark’s high food and environmental standards.

According to Hodges, construction of the water recycling plant will be carried out in 2020 and early 2021, with full operation expected in 2021. The plant is to have a daily capacity of 2,000 m3.

The company did not disclose an exact figure for the investment, though according to Hodges, planned capital expenditure, in euros, is in the double-digit millions.

Hodges said: “This is a big investment for us, but also a necessary next step on our journey towards ZERO water waste across all our breweries.”

“The Fredericia brewery has consistently focussed on resource management and water reduction, but we need better use of advanced water recycling technologies to reach the ambitious targets in our Together Towards ZERO programme. On the eve of its 40th anniversary, the Fredericia brewery will serve as a learning platform for all our breweries.”

The Fredericia brewery was inaugurated in 1979. The water-to-beer ratio then was 4:1, at a time when the global norm was 6:1, according to Carlsberg.

Carlsberg’s Together Towards ZERO sustainability programme consists of four ambitions: ZERO carbon footprint, ZERO water waste, ZERO irresponsible drinking, and a ZERO-accident culture. Each of these ambitions is underpinned by individual measurable targets which the company aims to achieve by 2022 or 2030.