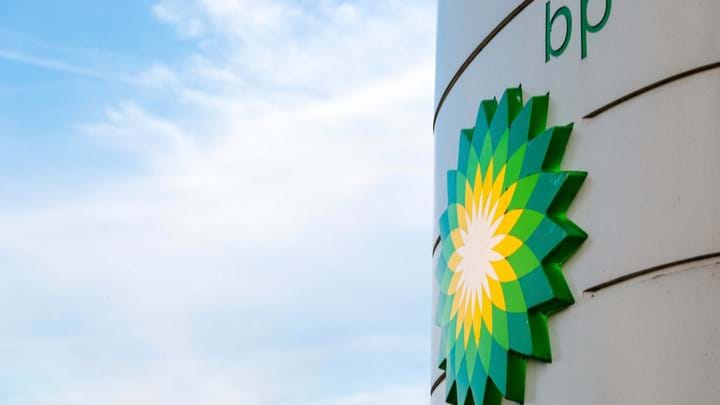 BP has released its annual Energy Outlook report, which suggests a significant increase in the use of electric vehicles, oil demand peaking before plateauing, coal demand decreasing, and carbon emissions still increasing 10% by 2040.

The report, published on 20 February, looks at global energy predictions up to 2040, although BP emphasises that this is a set of “what if” scenarios rather than forecasts. Most of the report is based on what they call the “evolving transition” (ET) scenario, which assumes that policies and technologies will change at a similar rate to the recent past. Alternate scenarios are also considered, namely the “faster transition” (FT) and the “even faster transition” (EFT) which have a faster decline in emissions.

Global energy demands will increase by a third, mainly due to rapid growth of developing economies and increased urbanisation, however this rate of growth is slower than in the past 25 years. China and India account for half of the growth in global energy demands. India will overtake China in the early 2030s as the fastest growing market for energy, and after 2035 Africa will contribute more to the global demand than China. Oil, gas, coal, and non-fossil fuels (nuclear, hydro, and renewable) will each contribute to a quarter of the world’s energy needs by 2040. 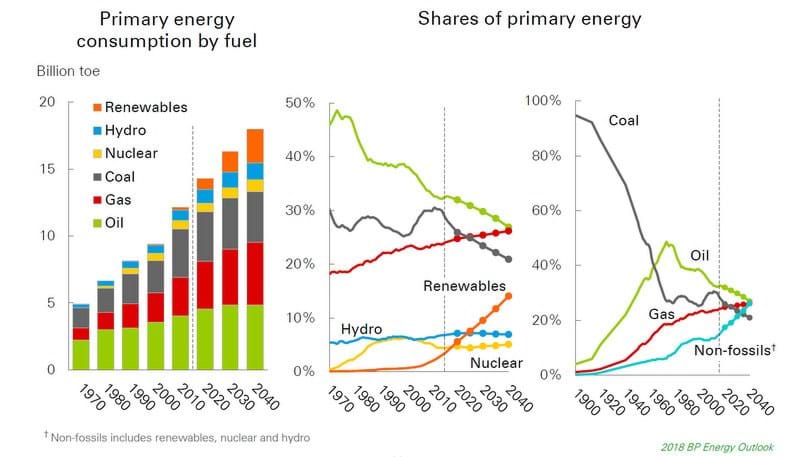 The demand for oil will continue to grow but will peak in the 2030s before plateauing. After 2030, growth will come mainly from non-combusted uses, such as feedstocks for petrochemicals. However, this growth could slow, due to increasing measures to reduce the amount of single-use plastics and packaging.

The demand for natural gas will grow steadily and will overtake coal to become the second largest energy source. This is due to continued switching from coal to gas and increasing availability of low cost supplies. The report also considers an alternative “less gas switching” scenario where gas growth is weaker if less switching from coal to gas occurs. The demand for gas could also weaken in a “renewables push” scenario, where renewables are favoured more than gas. Gas demand is further decreased in both the FT and EFT scenarios.

In its 2017 Outlook, BP predicted that coal demand would grow slowly at 0.2%/y. In contrast, the 2018 Outlook shows coal consumption plateauing. Coal was predicted to have 24% of the overall power share in the 2017 report, which falls to 21% in the 2018 report. China will continue to have the largest coal market, accounting for 40% of the global coal demand up to 2040, despite a drop in demand. This drop is offset by the rise of coal demand in India and other emerging Asian economies.

Nuclear and hydro continue to grow although less rapidly than before. Renewable energy sees the largest growth – over 400%. Non-fossil fuels make up 25% of the power share by 2040 in the ET scenario, but in the renewables push scenario this rises to 40%.

The increase in demand is mainly enabled by the increasing competitiveness of wind and solar power, and BP’s optimism towards solar power can be seen with its recent US$200m investment in solar development company Lightsource. BP predicts that falling costs will make solar power widely competitive by the mid-2020s, which is ten years earlier than previously expected, however their predicted drop in price starts to flatten off at around US$50/MWh between 2025 and 2040. 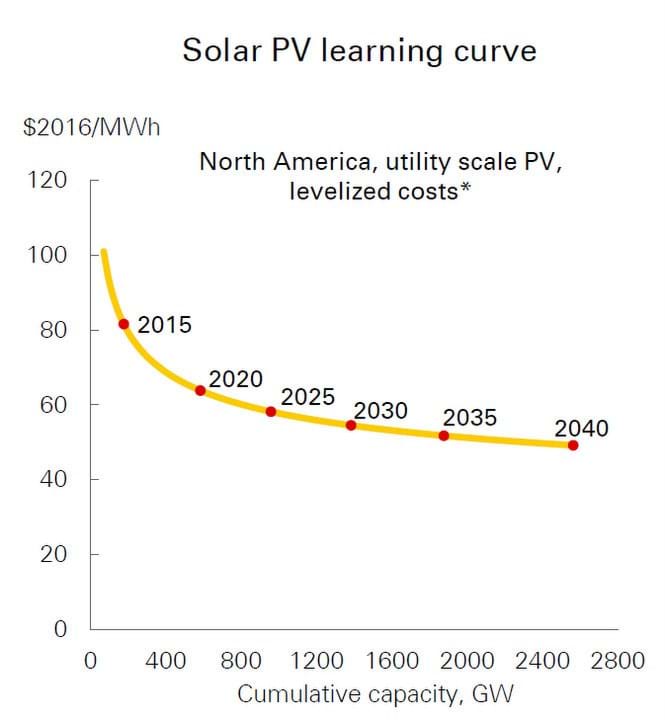 While BP does highlight that some projects will offer prices below this curve, the report has come under criticism, as solar power in the US is already lower. Seb Henbest, lead author of Bloomberg New Energy Finance’s (BNEF) New Energy Outlook posted on Twitter that “Sub-$50/MWh PV is already standard today in most places. Sub-$30 in very sunny spots.”

Laurence Watson, data scientist at the Carbon Tracker Initiative also commented on BP’s solar predictions: “BP’s costs for renewables are already out of date. Remarkably, solar PV tariff prices in India have declined nearly 80% since 2011. This price decline means solar PV is no longer just a threat to new coal investments. In many regions building new renewables will soon be cheaper than running existing coal – in Europe alone, we find that wind and solar will out-compete existing coal plants by 2024 and 2027 respectively. Renewables won’t just be taking the growth away from fossil fuels, they will be winning on all fronts.”

Energy demands for transport will grow by only 25% despite the demand for transport doubling, which is a significant drop from the 80% increase in energy demand for transport in the last 25 years. This is due to gains in vehicle efficiency, and vehicles in 2040 will be 70% more efficient than in 2000. The transport industry will still be dominated by oil, but electric vehicles (EVs) will account for 15% (300m vehicles) of the share of the global car park. However, due to the increased intensity with which they are used, EVs will account for 30% of passenger kilometres. Fully-autonomous cars with shared mobility also have the potential to increase this intensity.

The Outlook also considers an internal combustion engine (ICE) ban from 2040. In this alternative scenario, 33% of all car sales in 2030 are electric, which rises to 100% by 2040. The oil demand is reduced by 10m b/d relative to the ET, however the oil demand is still higher in 2040 than in 2016. “Even if they were to grow very, very rapidly, electric cars are unlikely to be a game changer for oil demand,” said Spencer Dale, group chief economist at BP. 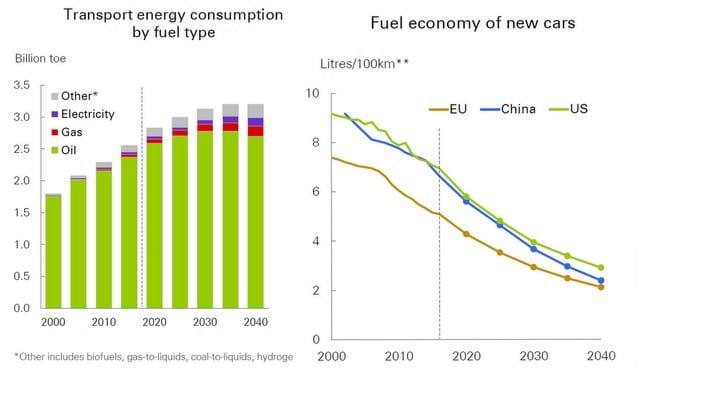 In the ET scenario, carbon emissions still rise 10% by 2040, although this rate is slower than the past 25 years when carbon emissions increased by 55%. The increased use of renewables can influence emissions trajectories, as evidenced by BP’s 2011 report, which predicted carbon emissions would rise at 1.2%/y, compared to 0.4%/y in the 2018 report.

Crucially, even this slower rate of growth is still far higher than the projected emissions decline of the Paris Agreement, and only the EFT scenario can cut the required amount of emissions. The EFT has emissions decrease 50% by 2040, as outlined by the International Energy Agency’s Sustainable Development Scenario. This emissions drop can only be achieved by the decarbonisation of the power sector by 2040.

The EFT scenario requires a sharp increase in carbon prices and a range of new policies to incentivise fuel switching and increased efficiency. “We need a far more decisive break from the past,” said Bob Dudley, group chief executive of BP. “In BP, we continue to believe that carbon pricing must be a key element as it provides incentives for everyone to play their part – from consumers using energy more efficiently to producers providing more low-carbon forms of energy.” 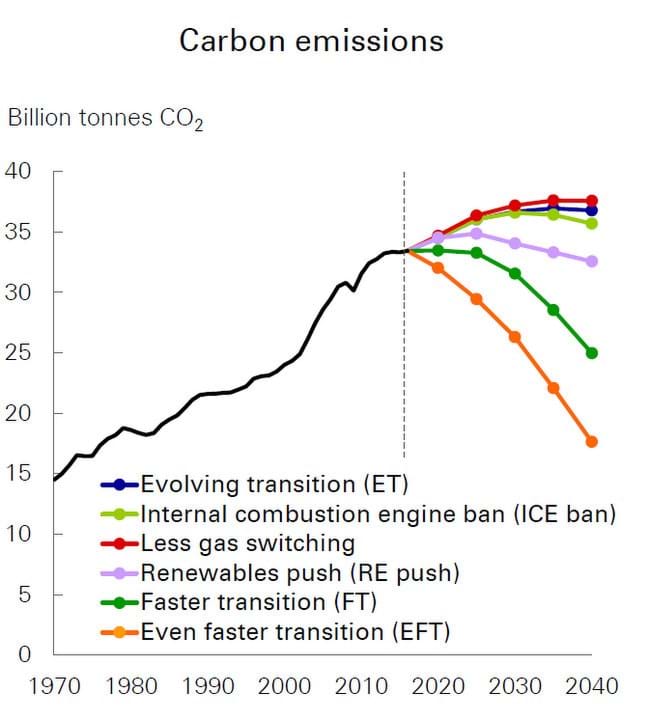 Luke Sussams, senior researcher at the Carbon Tracker Initiative, said: “It’s significant that BP has kicked the notion of an energy transition to the forefront of its latest Outlook. However, its business-as-usual projection – rebranded as the ‘evolving transition’ scenario – shows the yawning gap between company expectations and the 2oC climate target set by the world’s leaders in Paris in 2015.”

Comparison to other outlooks

Overall, the energy demand is similar to the 2017 report, but the fuel mix is different. The greatest revision is that of renewable energy with the projected solar power usage being 150% higher than the 2015 Outlook. Coal consumption is lower than in the 2017 Outlook and China’s energy demand is lower by 5% due to enhanced policies aiming at reducing energy intensity. The predicted number of EV cars has almost doubled from the 2017 report, which showed 100m EVs in use by 2035, whereas the 2018 report has this rise to 190m by 2035, and 320m by 2040. The rate of EV usage is growing faster than BP originally imagined, and this is reflected in its plans to install EV charging points at UK petrol stations. 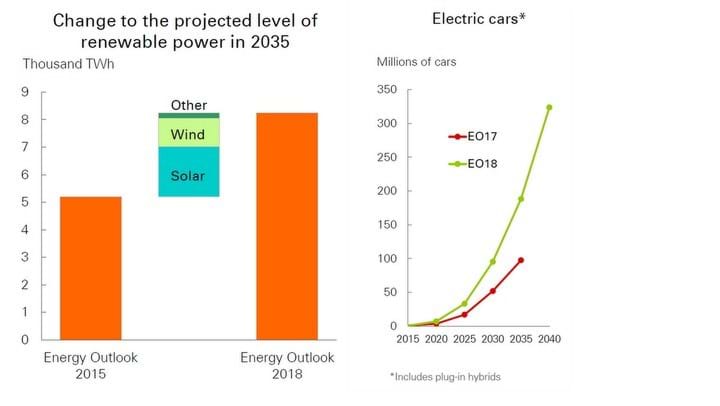 BP also compares its 2018 Outlook to other organisations with similar scenarios. The BP prediction of oil and gas demand by 2040 is lower than the average of the other reports, and some don’t foresee a peak in oil at all. The BP predicted growth rate of renewables (7%/y) is among the highest and is higher than the average (5.5%/y), which it suggests as possibly being due to different views on the pace of technology advancements. BP also has a high estimated rate at which EVs will increase, although BNEF is significantly higher estimating over 500m EVs in 2040, compared to BP’s 300m.

“We are seeing growing competition between different energy sources, driven by abundant energy supplies, and continued improvements in energy efficiency,” said Dale. “As the world learns to do more with less, demand for energy will be met by the most diverse fuels mix we have ever seen.”