THE Australian Government has announced funding to support the rollout of eight hydrogen hubs as part of an ambition to position the nation as a major global player in the industry by 2030.

This is part of a commitment made under the previous Australian Liberal-National coalition Government, which was voted out in a federal election in May.

In 2019, Australia released its National Hydrogen Strategy which sets out a vision for a national industry with global ambitions. A key element of its approach is creating hydrogen hubs, clusters of large-scale demand, to springboard the industry to scale. Australia committed A$464m (US$328.1m) through its Clean Hydrogen Industrial Hubs program, which will help fund the construction of eight hubs, and provide a smaller pot of funding for nine feasibility and design studies. 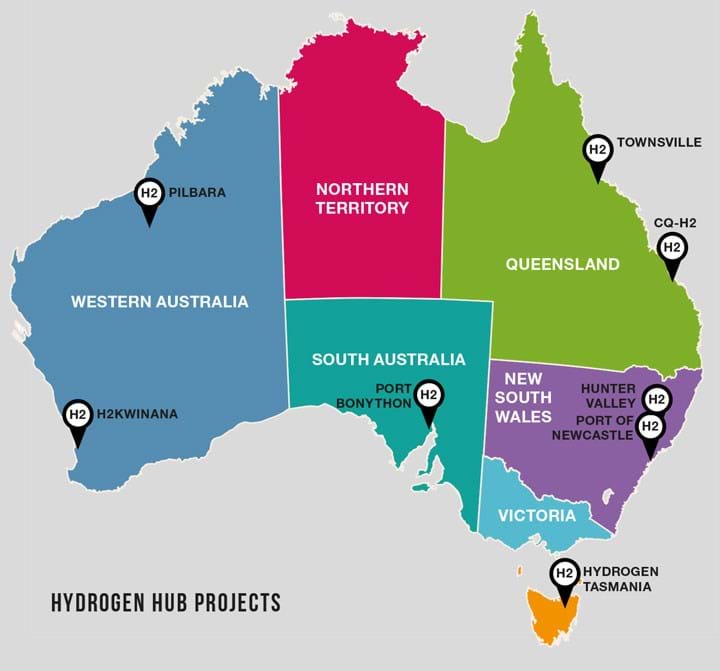 Rollout funding will support two hubs each in New South Wales, Western Australia, and Queensland, one hub in Tasmania, and another in South Australia. Previously, the Government identified just seven prospective hub locations. However, it announced in late April that it will invest A$70m towards creating a clean hydrogen hub in Townsville, North Queensland.

At the same time, Government announced up to A$69.2m to establish the Stanwell Corporation’s Central Queensland Hydrogen Hub (CQ-H2 Hub). It is expected to produce about 100 t/d of renewable hydrogen by 2026, scaling up to 800 t/d in 2031, using up to 3 GW of electrolyser capacity. One of the aims of the CQ-H2 project is to establish a first-of-its-kind integrated hydrogen supply chain between Central Queensland and Japan.

The Government also committed to supporting BP’s H2Kwinana project in Western Australia with up to A$70m. The hub will rely on a 75 MW electrolyser and will support domestic and export demand. The feasibility study is expected to be complete in Q2 2022.

Discussing the hubs, Fiona Simon, CEO of the Australian Hydrogen Council, said that co-locating hydrogen users and producers in areas with access to port, road, and rail infrastructure and potential pipeline easement is an important step for the industry.

She added: “These are the hubs we have to have if Australia is to become a global player in hydrogen production and exports by 2030. They will drive the creation of regional jobs and build our export prosperity.

“It is a race and we’re at the starting gates with the flag raised. It’s now up to governments to work with stakeholders and local communities to ensure the hydrogen hub sites quickly move into planning and development phases.”

The Government is also investing up to A$23m to advance nine projects at the concept stage to investment-ready proposals, including three in Queensland. Recipients for Queensland-based projects are Ark Energy (A$2.42m), Origin Energy and Eneos (A$1.25m) and Vena Energy (A$3m). Origin and Eneos are collaborating to study a potential CO2-free hydrogen supply chain between Japan and Australia.

The Government has announced further funding, beyond the A$464m commitment, which is expected to support hydrogen industry.

In Queensland, further support includes up to A$44.9m for a hydrogen gigafactory, and up to A$85m for carbon capture, use, and storage (CCUS) projects. Angus Taylor said that the range of projects demonstrates Queensland’s ability to use existing skills from its world class liquified natural gas (LNG) industry. At the time of his statement, Taylor was the Minister for Industry, Energy and Emissions Reduction.

He added: “Queensland has great potential to become a clean hydrogen producing powerhouse, with its access to local low-cost gas, carbon capture opportunities and renewables potential.”

Alongside federal commitments, the Queensland Government is also working to boost its hydrogen industry. Last month, Queensland’s Minister for Energy, Renewables and Hydrogen Mick de Brenni, signed a memorandum of understanding with the Port of Rotterdam to collaborate on a potential hydrogen export supply chain to Europe’s largest port. “This landmark agreement is another ringing endorsement of Queensland’s quest to be a green hydrogen superpower,” de Brenni said.

“The Port of Rotterdam has a target to import up to 20m t of hydrogen by 2050, starting with imports of ammonia in 2025. This latest milestone demonstrates that Queensland has what it takes to help economies around the world achieve their decarbonisation ambitions. And given the recent impacts of world events on energy security and their sky-rocketing effect on power prices, this has perhaps never been more important.”

The recent funding announcements were made through April 2022 and into May, during the Australian Government’s caretaker period. During this period, Government cannot start or agree to any new major undertakings, except after consultation with the Opposition. The period began after the federal election was announced and ended on 23 May, after the new Government was elected.

Newly-elected Prime Minister Anthony Albanese said in his victory speech that the Australian people had “voted for change”. He said the nation could “end the climate wars” and “take advantage of the opportunity for Australia to be a renewable energy superpower”. His plan for Australia includes allocating up to A$3bn to invest in hydrogen electrolysers and fuel switching, green metals, clean energy component manufacturing, and agricultural methane reduction and waste reduction.

In a statement prior to election, he said: “The climate wars have seen a decade wasted, when it should have been a decade won. We should be a clean energy superpower – harnessing the wind and sun to spark a new manufacturing boom. Developing a hydrogen industry.

“The election result couldn’t be clearer: the people demand climate action. Australia is the biggest exporter of coal and gas pollution in the world. The answer is simple: we cannot open up more coal and gas. Our futures depend on what we do in this moment”

“We need national leadership that will shape our future […] One that cherishes our natural environment and has a domestic climate change policy that gives us credibility to argue for international action.”

He said: “The election result couldn’t be clearer: the people demand climate action. Australia is the biggest exporter of coal and gas pollution in the world. The answer is simple: we cannot open up more coal and gas. Our futures depend on what we do in this moment.”

Recently, Australia’s oil and gas trade group urged the country to develop new fields to boost energy security in the wake of Russia’s invasion of Ukraine.